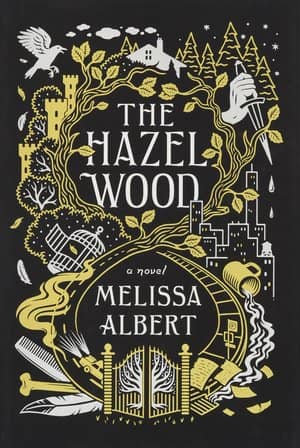 I usually need to read at least a third of a book before deciding to review it for Black Gate. While I always read the books I review all the way to the end, sometimes it takes that long to decide. But when I picked up Melissa Albert’s The Hazel Wood, I suspected I’d review it after only reading the first two paragraphs. I was sure of it once I’d hit page three.

That’s got to be some kind of record.

Something’s strange about our protagonist, Alice Crewe. From a young age, she’s always been on the move. Her most dominant memory is the view of the blue sky out the sunroof. But according to her mother, their car doesn’t have one.

When she was three, Alice was abducted by a kind stranger who drove off with her in a blue Buick. Even though her mother swears she’s never seen the man before, we wonder if perhaps six-year-old Alice could be right, and he’s actually her father.

Throughout Alice’s childhood, dangerous people and peculiar occurrences dog Alice and her mother like persistent bad luck, so they lead a semi-nomadic existence, uprooting themselves whenever something uncanny gets too close. Until one day, when Alice’s mother receives a letter informing her of her mother’s death. “This isn’t… forgive me, but this isn’t a bad thing. It’s not,” she insists. “It means we’re free.”

Alice’s grandmother’s death means that, for once, they can stop moving. The bad luck’s gone. When their home is subsequently broken into, it’s not a resurgence of the curse. It’s just New York City being, you know, New York City.

Or so teenage Alice thinks, until the day she’s working at a coffee shop and realizes that one of her customers is the man who kidnapped her when she was six. He’s sitting at a table reading Tales from the Hinterland, the collection of dark fairy tales written by Alice’s grandmother that’s so rare, Alice has never been able to read it. When he sees that she’s noticed him, he exits in a hurry, taking the book with him but leaving behind a bone, a feather, and a red plastic comb. For the first time, Alice wonders whether her grandmother’s disturbing fairy tales might not be fiction.

In the pages that follow, the mysteries only mount. What do the bone, the feather, and the comb have in common? What are they for? How might they be related, say, to a birdcage? Or a flower tattoo? Could all these strange objects be connected by Tales from the Hinterland?

And if the Tales from the Hinterland are true, and if the monsters in these twisted stories really are on Alice’s trail, how will she ever be safe?

What makes The Hazel Wood so good? Part of the appeal is the startling, literary prose, which is wildly inspired in the Natalie Goldberg sense. Part is the hair-raising plot, which borders on horror. Somehow, the characters are both completely original yet unnervingly familiar at the same time. I stayed up way past my bedtime to keep reading this book, despite fearing the nightmares it might generate.

While marketed as YA, you should not deprive yourself of the experience of reading it, no matter what your age. The Hazel Wood is “children’s” literature at its best. Albert’s a contemporary Madeleine L’Engle. A comparison to Lewis Carroll also seems apt. Right, Alice?

Albert deserves a standing ovation. This is the kind of book that makes me as a writer not just want to write, but also to become a better writer.