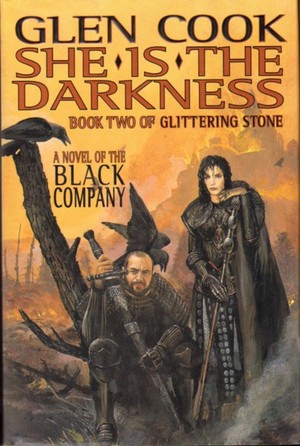 A skinny, mangy mongrel raced past and on the dead run clamped jaws on a startled crow. He got a wing.

All the crows in the world descended on him before he could enjoy his dinner.

One-Eye and Croaker from She Is the Darkness

It’s summer, I’m busy living a summer life. As Glen Cook books go, She Is the Darkness (1997) is a long one. Um, something, something, something. All that’s to say I’m breaking my review into two parts. It’s not what I’d normally do, but I don’t want to lose the momentum of reading the books back to back. Remember: beyond here lie spoilers.

At the end of the previous book, Bleak Seasons, the Black Company under the restored leadership of Croaker, aka the Old Man, aka the Captain, was girding its loins for the final march on the last stronghold of Longshadow, the last Shadowmaster.

Overlook is pretty much Glen Cook’s version of Barad-dûr. Its walls rise to a hundred feet, and are covered in protective spells. Inside lurk untold numbers of soldiers backed by the terrible sorcery of the erstwhile Taken, Howler, and Longshadow himself.

In the field, ex-Black Company chief-of-staff Mogaba leads Longshadow’s last remaining army. Aided by another defector, Blade, Mogaba cannot imagine himself being beaten, and lies in wait for the Black Company and the soldiers of Taglios to attempt to force the pass over the Dhanda Presh Mountains.

Oh, and the wife of new Black Company Annalist Murgen was murdered by the Deceivers. During an assassination attempt on Croaker in the Palace of Taglios, a group of killers found their way into the living quarters of Murgen’s family and left his wife Sahra and her son dead. While not a completely broken man, Murgen is allowing himself to become addicted to traveling through time and space on the spirit of the comatose wizard, Smoke. Officially, Murgen’s doing this to spy on Longshadow and other things important to the health and welfare of the Black Company, but really it’s to avoid the depression brought on by the killing of Sahra. It continues to be a poorly explained and clunky device.

The death of Sahra is also not as simple as it seems. There’s a terrible secret surrounding it, and even though his late wife’s family, including the thoroughly kickass Uncle Doj, know what happened, Murgen doesn’t uncover it for many months. In a series flush with emotionally raw events, what really happened the night of Sahra’s death is one of the hardest in the whole series.

The entire first half of She Is the Darkness concerns the movement of Croaker’s forces towards the showdown with Mogaba’s and Blade’s. Meanwhile Murgen, flying on the wings of Smoke’s psyche, spies for his commander and fills in all the gaps for the reader, giving us an inside look at the doings of the Company’s enemies. There’s no getting around it, much of the first half of the book’s a slog. It might reflect some sort of logistical and strategic masterpiece if it occurred in real life, but on the page it moves like molasses on a winter day. Nonetheless, the book isn’t a disaster, just frustrating.

As in Bleak Seasons, Murgen narrates She Is the Darkness. Despite all the time-and-space traveling stuff, Murgen continues to serve as a good voice for the Company. Croaker, a man the reader has come to know so well over the four books he narrated, has become a distant figure, wrapped in plots and schemes. No member of the Company, neither One-Eye nor Lady, is privy to all of them. Now commonly referred to as the Old Man, Croaker has metamorphosed into the same sort of man the original Captain was all those years ago in The Black Company and Shadows Linger. For Murgen, as for the reader, it’s a frustrating situation, leaving him often no more than an observer to the great events transpiring around him.

After Shadow Games and Dreams of Steel where the focus on the actual Company commanders was intimate, I found it interesting that Cook went back to the perspective of a character at a remove, especially from all the big stuff. I’m not sure why he chose to do it. Maybe he thought in order to reinforce the mundanity of soldiering — the mud, the privation, the long stretches of boredom punctuated by moments of awful terror — making the big bosses the protagonists detracted from that. Whatever his reason, I do like the continuing shift from one Annalist-narrator to another as the books progress. It reinforces that the Company is always growing and always changing while still remaining the same; tied to its old roots by its history and the Annals.

The action, when it comes, is awesome. The battle before the pass is an epic struggle that lasts for days. Victory, hard won, comes only when it’s revealed that Croaker’s hatred of Blade and the latter’s defection was all a ruse. For four years the two of them fooled everyone, most importantly Mogaba. When the right moment comes, Blade leads a quarter of Mogaba’s army into a trap and forces them to surrender or face annihilation. It’s a staggering moment when the depth of Croaker’s deviousness is revealed.

Blade and Croaker met midway between. They exchanged a few words. Silly me, I expected the Old Man to settle the feud he had been prosecuting so vigorously for so long. Instead, he threw his arms around Blade and started laughing.

It had been a long time for the Captain. His laughter had a definite mad edge.

They started jumping up and down, holding on to one another.

Then Blade spun away. He bellowed at his soldiers, “Stack your weapons and surrender. Or you’ll be exterminated.”

I was so dense that only now, as Blade’s soldiers began obeying orders, as they had been taught, did I recognize the swindle.

Blade’s defection had been staged. Croaker’s years-long mad pursuit of him had been cosmetic except where he had used Blade to rid himself of obnoxious religious fanatics.

Nothing like having your enemies do your dirty work for you.

More, Blade had worked hard to make the Shadowmaster unpopular with his subjects. Whole territories had surrendered without even token resistance.

And now Blade had delivered a quarter of the Shadowmaster’s finest troops.

Nowhere in the Annals was there a con to match this con. And this one Croaker created for himself. He would laugh up his sleeve for a long time, knowing Mogaba could not have imagined him capable of such an unprecedented move. Mogaba did not think Croaker capable of taking a deep breath without consulting the Annals.

I do think this sort of surprise might help explain Cook’s return to Annalist as narrator instead of Captain as narrator. There’s no way this, and several other big reveals, could have the same impact if 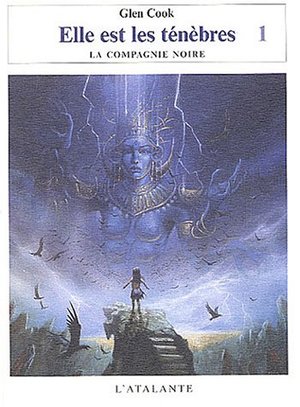 Croaker was the narrator.

Another important part of She Is the Darkness is the growing presence of the evil goddess, Kina. While not present physically, she’s appearing in the dreams and space-time travels of Murgen. We also learn she’s a constant figure in Lady’s dreams. Lady’s daughter is possessed by some portion of Kina’s spirit and is known as the Daughter of Night. Somehow, Lady is now connected to Kina as well. Both Murgen and Lady are able to sense that Kina is getting stronger and the time of her liberation, the Year of Skulls, is looking imminent. While the Deceivers are mostly wiped out directly by Lady and her own troops in the course of the book, by Murgen’s spying it is learned that the Daughter of Night is proceeding with certain rituals that can still free Kina.

“But you can’t read or write. You’re too little.”

“My mother will guide my hand. But I must begin my task quickly. She fears we may not have much time left here, in safety.”

“What are you going to do?” Narayan asked, wide awake now and completely baffled.

“She wants me to make copies of the Books of the Dead.”

“Make copies? They’ve been lost for thousands of years. Even the priests of Kina doubt that they exist anymore. If they ever did.”

“They exist. In another place. I have seen them. They will exist again. She will tell me what to write down.”

I stopped reading as Croaker’s forces reach Overlook and Croaker drops the bombshell on Murgen that he might abandon the plan to help topple Longshadow. It’s a shocking idea, but one Croaker’s been contemplating for years.

I’ll leave things there, just beyond the walls of Overlook and with Croaker undecided about which road to take; to battle at Overlook or onward to Khatovar. Be sure to tune in next week for the stunning (maybe) conclusion of my reread of She Is the Darkness.

One of my favorite Black Company covers. Always considered this a decent depiction of Croaker and The Lady. The French covers still have the edge though.

@Tony – Yep, probably the best cover in the series. I wish the earlier, better, books had such covers, but what are you gonna do? And, right, those French covers are terrific. It’s always good when the cover artist reads the book.

MICHAEL JACKSON was in the Black Company? Clearly I have some catching up to do….