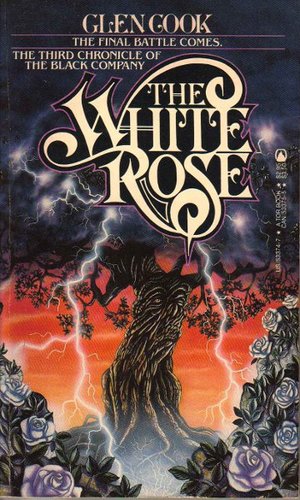 With The White Rose (1985), Glen Cook brought the original Black Company trilogy to an end. Taking place six years after the escape of the Black Company’s survivors in Shadows Linger, TWR contains three distinct stories. The foremost is Croaker’s account of the final days of the rebellion led by the White Rose against the Empire of the Lady. The second concerns the mysterious Corbie’s efforts to uncover what is happening in the Barrowlands where the Dominator, the North’s erstwhile Dark Lord and husband of the Lady, remains trapped. Finally, jumping back in time nearly a century, Cook presents the story of Bomanz, the wizard who released the Lady and her servitors from their shackles in the first place.

Under the leadership of Darling — revealed at the end of The Black Company to be the foretold champion, the White Rose — the rebellion consists mostly of spies scattered across the empire and a few dozen veterans holed up in caves in the middle of the Plain of Fear. The plain is an exotically magic-infused region where menhirs talk and move on their own and giant manta-like beasts fly from their roosts on the backs of thousand-foot-long windwhales. Those and lots of other strange things all bow down to the voiceless direction of Old Father Tree.

Sagey scents trickled across my nostrils. Air chuckled and whispered and murmured and whistled in the coral. From farther away came the wind-chimes tinkle of Old Father Tree.

He is unique. First or last of his kind, I do not know. There he stands, twenty feet tall and ten thick, brooding beside the creek, radiating something akin to dread, his roots planted on the geographical center of the Plain. Silent, Goblin, and One-Eye have all tried to unravel his significance. They have gotten nowhere. The scarce wild human tribesmen of the Plain worship him. They say he has been here since the dawn. He does have that timeless feel.

With the protection of the denizens of the Plain, the rebellion has survived. Now, though, even there its survival is in doubt. After two years of neglect, the Lady has ordered a massive assault on the Plain, surrounding it with five armies under the leadership of the Company’s greatest enemy, Limper. The only surviving member of the original Taken, victim of several plots led by the Company, and left for dead at the end of Shadows Linger, his hatred for them is boundless.

The only hope for the Company lies in discovering the Lady’s true name. Equipped with it, even the relatively minor wizards of the Black Company would be able to strip her of her powers. Long ago the Company captured — and lost — a cache of papers that might have contained that secret. Soon a race to recover those papers becomes central to any hope for the Company’s and the rebellion’s survival.

The account of Corbie’s detective work serves as the connector between the past and the present. Endeavoring to find out how the Dominator is attempting to free himself, Corbie must uncover the true nature of Bomanz’s own explorations. Secretly, he begins sending his findings to Croaker to help the Company. 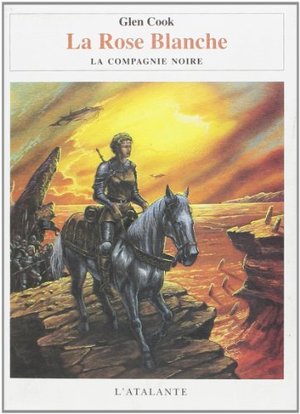 Finally, the Bomanz section reveals him not to be the great villain history has made him out to be. Instead, he’s the classic wizard blind to his own weaknesses. Intent on contacting the Lady and gaining access to her knowledge of great magics, he spent nearly forty years of his life secretly mapping out the Barrowlands and all its traps and snares. In the end, his lack of insight ends up dooming the North to the return of the Lady.

There was only one chance left. One impossible chance. It rode on the time-bowed shoulders of a pudgy little man whose powers were not at their sharpest.

He marshaled his most potent spells, his greatest magicks, all the mystical tricks he had worked out during thirty-seven years worth of lonely nights. And he started walking toward the Barrowland.

Hands reached out to detain him. They found no purchase. From the crowd an old woman called, “Bo, no! Please!”

The Barrowland seethed. Ghosts howled among the ruins. The Great Barrow shook its hump. Earth exploded upward, flaming. A great winged serpent rose against the night. A great scream poured from its mouth. Torrents of dragonfire inundated the Barrowland.

The fat little man walked into the holocaust, unleashing his arsenal of spells. Fire enveloped him.

The White Rose is a terrific conclusion to this first stage of the Black Company series. From The Black Company, the Dominator has been teased out as the real villain of the series, first in his subversion of some of the Taken and the rebellion, and later in his plot to resurrect himself in Juniper. Now it’s do or die for the rebels and the Lady. Can he be stopped? And if so, at what cost?

The first part of the book chugs along at a modest pace, each section basically a mystery as Croaker, Corbie, and Bomanz each attempt to find answers to the desperate questions they’re asking. As the plot lines begin to merge, the pace quickens, until all hell breaks loose. The Black Company, Corbie, the now-resurrected Bomanz, and even the Lady all find themselves facing the inevitable rise of the Dominator out in the wilds of the Barrowlands. Terrible sorcery is unleashed, demons set free, barbarians attack, and old feuds are reignited, all while trying to fend off a dark lord whose return, it is prophesied, will inaugurate ten thousand years of tyranny.

Croaker remains the most interesting character, but the Lady, a main protagonist in the later books, begins to take center stage in The White Rose. Early on, Croaker became fascinated with the Lady, particularly with the contrast of her icy beauty and her seemingly evil nature. When his curiosity became known, she turned her eye to him, and in turn became interested in his activities as the Company’s annalist. In order to ensure an honest record of events, she dragged Croaker along on a deadly mission in The Black Company. When it became apparent the Company was going to leave her service in Shadows Linger, he became her point of contact to try and get them to stay. In this book, she eventually makes him a confidante, eventually exposing her surviving humanity to Croaker. A person of tremendous power and force of will, she’s a significant contrast to the wearied, self-doubting Croaker. 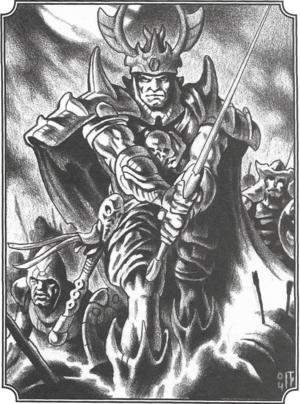 Taken together, the Black Company trilogy remains a potent work of heroic fantasy. Cook makes the big things feel huge without ever letting the reader forget how individuals are affected by them. The resolutely non-Romantic world is one of the first, and more believable, such settings in the genre. Without ever losing the story amidst pages of mock history, or even a map, it’s a world that feels real.

The battles are as incendiary and exciting as when they were written. Several commenters, here and on Facebook, have made the claim that no writers do magical battles as well as Cook and I agree completely. He paints the terror and weirdness very well:

“In the water!” that voice thundered from above. Darling moved some more. The Lady and I scrambled over earth still rippling with the dragon’s efforts to break free. It ignored us. Bomanz had its entire attention.

A windwhale dropped. Its tentacles probed the river. It caught something, dropped ballast water.

A human figure writhed in the whale’s grasp, screaming. My spirits rose. We had done it. …

The whale lifted too high. For a moment it raised the Dominator out of the null.

Thunder. Lightning. Terror on hot hooves. Half the town and a swath to the edge of the null shattered, scattered, burned, and blackened.

Croaker and the rest remain the same band of sympathetic scoundrels, rogues, and cutthroats I first met thirty-four years ago. Cook is an expert at presenting characters in swift, indelible strokes. He also has a knack for names, like Limper, Whisper, and Toadkiller Dog, that linger in one’s thoughts long after the books end. When characters get put through the wringer, which they do regularly, you feel it with them. When characters die, you feel their absence. There are losses I’ve never quite forgiven Cook for, but that’s because he’s crafted characters who’ve grabbed me like few other writers’ have.

Again, as a few commenters have pointed out, the military camaraderie between the Company men feels real. While I can only assume Cook drew on his own stateside naval service to help fashion the verisimilitude, it feels far more true-to-life than many other military fantasies I’ve read. For a writer who rejects excessively emotional or colorful prose, there’s a great feel for humanity in Cook’s work. He knows that as black-hearted and foul as we can be, there’s still room for the opposite, sometimes even in the worst of the worst.

I can’t write it enough: if you haven’t read the first three Black Company books, and especially if you like military or epic fantasy, grab a copy and settle in for a fast and furious read.  The later books are more of a hit-or-miss affair, given to overly-long narratives and distractions (or at least that’s how I remember them). These first three – The Black Company, Shadows Linger, and The White Rose – though, are the real thing. They’re still read and talked about all these years later for a reason.

Excellent finale Fletcher. You have got me seriously considering a re-read of these page turners! I need to anyway as my memory of them is clearly a bit flawed, if one notes my Corbie error on my Shadows Linger comment.

Agreed Cook wraps up the series nicel in The White Rose. Things like wind whales and Old Father Tree have stuck with me over the years. Also recall feeling quite emotional when the book ended, Cook had clearly drawn me in, causing me to become invested at a level few other authors have. Also greatly disappointed that the series had ended. I was not at the time aware that further books were planned or had indeed already been published.

On a tangentially-related note, all of the Black Company books (the individual volumes, not the collections) are currently $2.99 in eBook on Amazon. Well, except for the first book (The Black Company proper), which is still $8.99.