A pair of Wesso covers for the Clayton Astounding — March and June, 1930

Among the material I acquired from the estate of Jack Darrow back in 2001 were his runs of two early fanzines, The Time Traveler and Science Fiction Digest. Mort Weisinger and Julius Schwartz, destined for even bigger things in the worlds of pulp and comic publishing, were involved in both. In a foolish moment of weakness, I let my friend Jerry Weist talk me out of The Time Traveler set. But I think that I’ll get over that one of these days…

I was looking through some of my Science Fiction Digest issues recently for some info a friend wanted on a project he’s doing, and when I opened the March 1933 issue, I discovered that tucked inside was a notice to Darrow that his subscription expired with this issue. On rare occasions I’ve found a notice like that in an issue of a pulp, but hadn’t encountered one in an early fanzine before, so thought I’d post it below.

The following issue, April 1933,contained an article that Weisinger and Schwartz wrote based on their interview of artist Hans Wessolowski, better known as Wesso. Wesso did a lot of work for the Clayton chain of pulps (taking their name from publisher William Clayton), including the covers to Strange Tales and the Clayton issues of Astounding. I’ve seen a few original interior illustrations by Wesso over the years, but as far as I know, none of his original pulp paintings from the Clayton chain still exist. 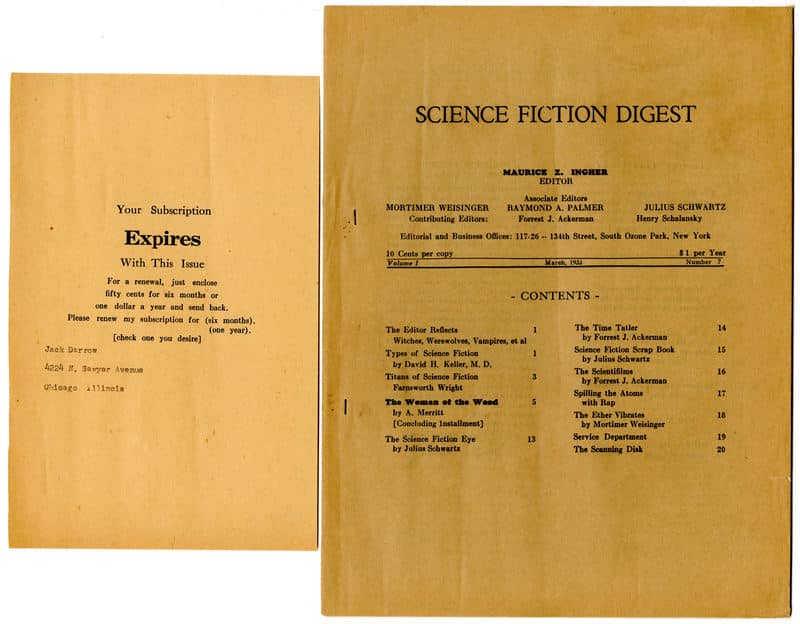 In the interview, Weisinger and Schwartz write, “Clayton has all his originals for Astounding and Strange. Has numerous black-and-whites propped up near easels and chairs.” So it appears that while Wesso got some his interiors back, the publisher kept his paintings.

When Clayton folded due to bankruptcy a few months later in 1933, various of the chain’s titles were sold to other publishers (with Street & Smith acquiring Astounding). But from everything I’ve read in the writer’s magazines and elsewhere regarding the bankruptcy, I don’t think that any art they had laying around was sold to anyone.

My hope is that some employee took at least some of it home, and that it may still exist in a closet or attic somewhere, but my guess is that when the Clayton offices were cleaned out and the lights turned off, all those lovely Wesso paintings went into the trash.