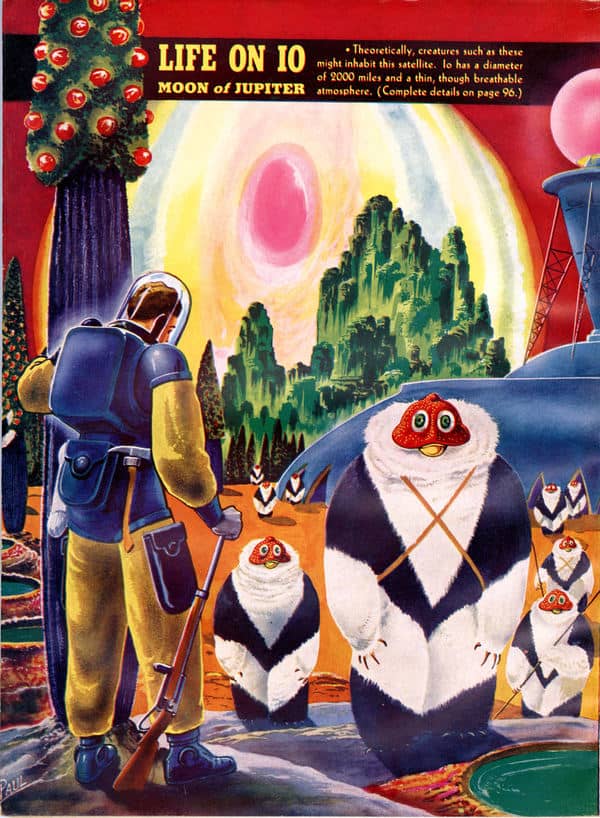 Back Cover of Fantastic Adventures, May 1940, by Frank R. Paul

After Otto Binder, the most prolific correspondent of SF fan Jack Darrow (real name Clifford Kornoelje) was their mutual friend, Bill Dellenback. In 1935, the three friends drove from Chicago to NYC, to meet up with various SF fans, editors and publishers. I ran Otto’s account of this trip (which were among the papers I acquired at Darrow’s estate auction nearly two decades ago) several years ago in Pulp Vault #14.

A few days ago, I posted a letter from Mary Gnaedinger (editor of Famous Fantastic Mysteries) to SF fan and collector Thyril Ladd, enclosing an original interior illo by Virgil Finlay, and promising Ladd the next Finlay cover. Running that letter reminded of another, even earlier, letter concerning original art, which I picked up from Darrow’s estate, that I’ve been meaning to post for some time.

Dated August 20, 1940, it’s from Dellenback to both Darrow and Binder. The Convention that Dellenback mentions several times on the first page is the upcoming Chicago Worldcon (or Chicon I), which started a few days later, running from September 1-2, 1940. On the topic of original art, Dellenback states that shortly before, he dropped in to the offices of Ziff-Davis and chatted with editor Ray Palmer before leaving town. While there, Dellenback picked out five Frank R. Paul back cover paintings, used on either Amazing Stories or Fantastic Adventures for a series on Life on Other Planets, which were going to be displayed at the Convention but which Palmer was then going to sell to Dellenback. The price isn’t mentioned; just that Dellenback was going to pay Palmer a “fair exchange.” A lot of other art from those pulps would be auctioned off at the Convention. 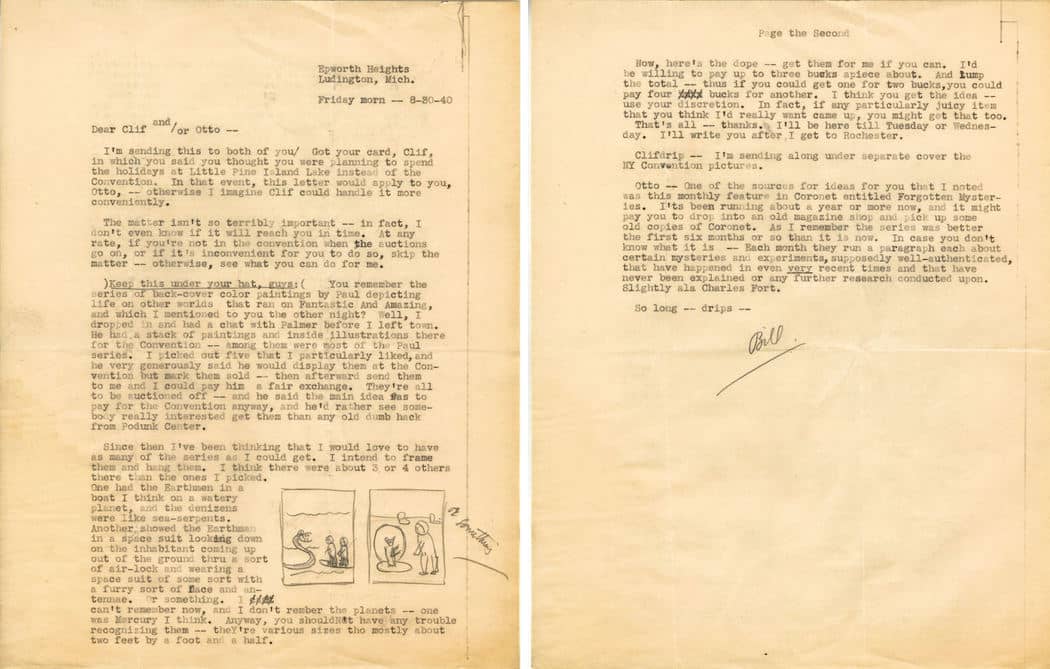 Now no longer in Chicago, Dellenback was writing Binder and Darrow to see if they might be able to pick up some other Paul back cover paintings which he’d passed on, but now wanted to get. Dellenback was willing to pay up to an average of $3 per painting. He describes and sketches two of them he was interested in. His descriptions and drawings don’t precisely track any of this series, but I think that the one shown on the left, with the sea serpents, is the back cover for Amazing Stories November 1940, “Life on Titan” (although this issue wasn’t out yet at the time of the letter, it was close enough that Paul could easily have already painted this and dropped it off). I think the one on the right is the back cover from Fantastic Adventures May 1940, “Life on Io.” 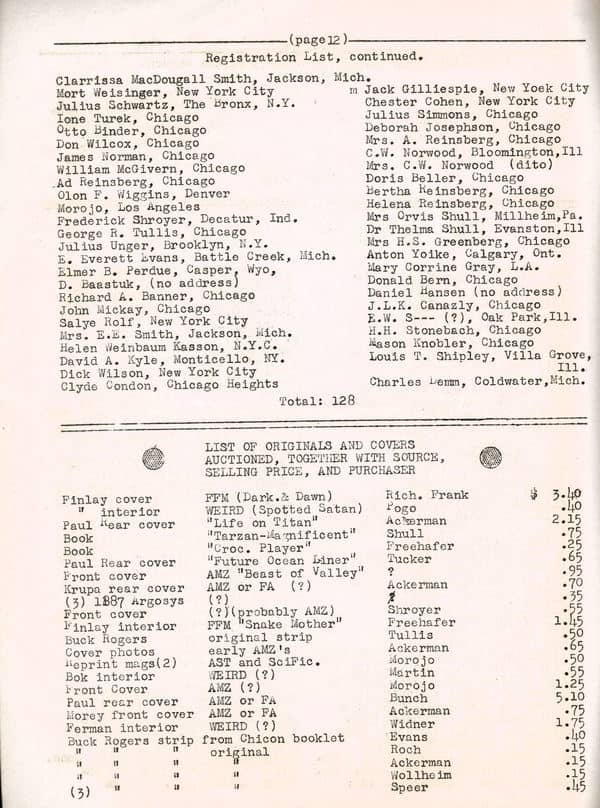 I don’t know if Darrow or Binder ever tried to buy this art for Dellenback, but if so, they weren’t entirely successful. At next year’s Worldcon, in Denver, Ziff-Davis also sent a lot of art to the auction. The auction results for that auction appeared in Bob Tucker’s classic fanzine, Le Zombie #40 (Denvention Issue) dated July 1941. Those results disclose that Paul’s painting for “Life on Titan” sold there to Forrest J. Ackerman for $2.15. At that Denvention, other Paul covers sold for anywhere from $.65 to $5.10, while interiors by folks like Paul, Cartier, Bok, Fuqua and others generally went for between $.10 and $1.00. 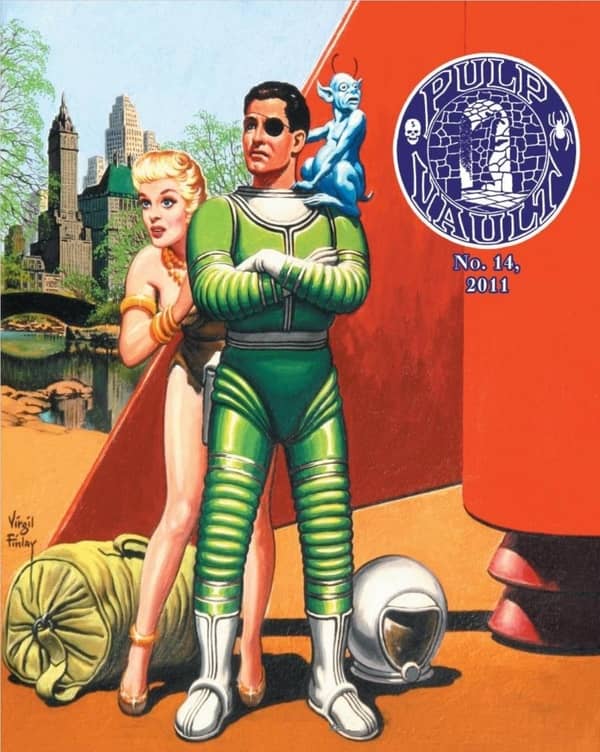 Although Darrow and Dellenback both traveled to NYC for the first Worldcon in 1939, neither attended Chicon. Darrow at this time was starting to get out of fandom (he’d been asked to participate in organizing the con, but refused) and Dellenback was out of town. However, on page two of the letter, Dellenback mentions that he’s sending Darrow photos he took at the NY Worldcon. Some of those were in the Darrow estate, and I also ran those in Pulp Vault #14. From various letters, it’s clear that he and Darrow took many more photos than I acquired, and that they also shot some film at the Convention. Unfortunately, the film footage wasn’t in the estate either. 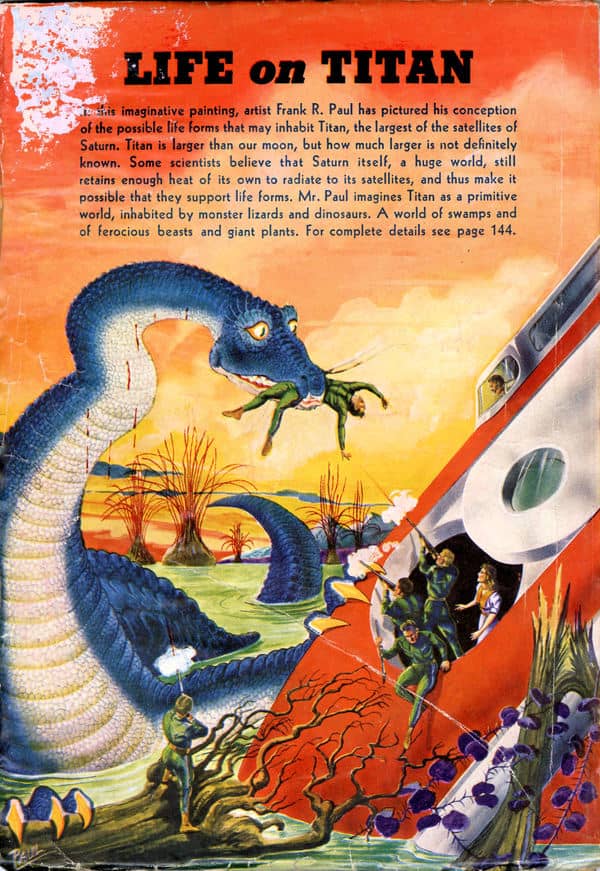 Back Cover of Amazing Stories November 1940, by Frank R. Paul

Dellenback would go on to become a professional photographer, working with the Kinsey Institute. I managed to track him down several years after both he and his wife passed away. The relative that I got in touch with told me that Dellenback and his wife were packrats who never threw anything away. When they passed away, a relative took charge of cleaning out the house, which primarily involved throwing mounds of stuff away, and sending things they thought were valuable to some consignment shops. When I asked if they knew what shops, I was told that the relative in charge now had Alzheimer’s, and no one else knew where the stuff had been sent. I have hopes that any original art that he still had, as well as his NY Worldcon photos and film, still might surface one day!

Doug’s last post for us was Here They Are — The Brand New 1957 Titles from Gnome Press.

Great article — and some great old Paul art to accompany it!

Although, as soon as I saw Dellenback’s second sketch, this is the image that immediately occured to me. It’s from the back cover of the April 1940 Fantastic Adventures, “Life on Uranus.” 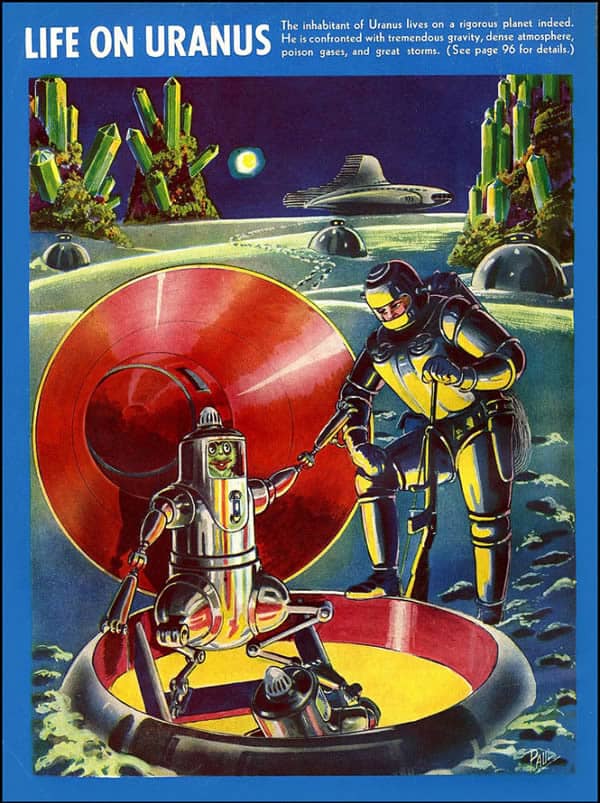