When it comes to my own preference, I like my audiobooks dark, spooky, snarky, and full of drama. But I’m not the only person in this house! In fact, I share it with (among several other mammals) a pair of elementary school aged girls for whom I am the staff. I mean mom. They’re five and eight, and some of my favorite books aren’t appropriate to play when they’re around. (I’m fairly progressive but I’m not ready to explain what exactly they’re doing on the movie set in Jim Butcher’s Blood Rites, for example.)

Finding strong, good quality stories that are suitable for them and tolerable to me is a priority. Enter  Sarah Mlynowski, Lauren Myracle and emily Jenkins’ Upside-Down Magic, a series of children’s novels that are delightful, original, and convey the kind of messages I don’t have to worry about them repeating in school the next day.

The central protagonist of Upside-Down Magic is Eleanor “Nory” Horace. Her father is the headmaster of a prestigious boarding school, and she’s preparing for entrance exams. By studying her shapeshifting. Nory is a “fluxer”, someone whose magic manifests as allowing her to change form. Nory is in most ways going through a normal adolescence in the world of Upside Down Magic. All people develop some kind and degree of magical ability, which manifests around their tenth birthday. Fifth grade, then, means transitioning from general education to magic school. Nory is expected to follow her father and siblings’ footsteps by entering the American magical equivalent of Eton.

If this all sounds a bit, well, familiar, you’re not mistaken. “Student enters magical academy, makes friends and has adventures” isn’t revolutionary. What makes Nory’s story refreshing, however, is that she is, surprisingly, not the Chosen One. She’s not the greatest practitioner of the arcane arts in her generation. She is, by her own culture’s standards, disabled. Her magic has grown in “wonky”. She can change form, but she can’t maintain a single, cohesive animal shape. She loses her human mind when she transforms. Her forms are all hybrids: her favorite is the “dritten”, part kitten, part fire-breathing dragonet. She fails her entrance exams, is rejected from the lofty Sage Academy, and is packed off to live with her Aunt in the suburbs to attend public school.

In that program, she meets a number of other students who are all learning to work with their “Upside-Down” magic. One student can only transform into inanimate objects. One freezes things instead of being able to common fire as a “flare.” Another terrifies animals away instead of charming them, as other so-called “fuzzies” do.

It’s common for the magic in fiction to be transparently metaphorical. (Buffy, anyone? Magic is drugs! Or sex! Or both!) The good news is that all tropes are new tropes to your average 8-12 year old. And what makes this work so well here, and why I endorse it, is specifically the fact that the character’s upside-down abilities closely mimic so many disabilities kids experience. Nory’s inability to focus on one form long enough to keep it parallels many a child’s experience with ADHD. Her friend Sebastian’s ability to see sounds leads to sensory overwhelm and, at times, complete meltdowns.

The age of the kids, the school setting, and the clear parallels to social anxiety and common difficulties neurodiverse kids experience could make for a saccharine overload, a series of Very Special Books that lay it on thick as treacle. The authors avoid this through a sense of humor that is self-aware without being arch, a keen awareness of the very real difficulties involved for both the kids and their caregivers, and the sensitivity to plot things in a way that doesn’t magically (ha ha) make those difficulties disappear. Pepper, whose abilities terrify away any animals who get close, may find ways to use her talents to make a living. But she still has to miss out on the school field trip to the Dragon Sanctuary. Learning that your difference bring strengths doesn’t erase the pain it also causes, and Upside-down Magic never soft-pedals this fact.

The other feature of the series I enjoy is one 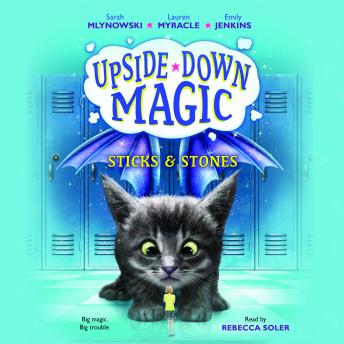 that I never would have noticed as a child, and that is that the students in this series get the support they need and deserve. I grew up on Roald Dahl, and younger kids grew up on J. K. Rowling, and the unfairness of the adult world is a built-in feature of their world building. There’s a lot to be said for that kind of realism: kids often feel surrounded by illogical and incomprehensible giants who don’t understand what’s important to them. But it’s deeply gratifying to see a world in which kids with special needs actually get those needs met. The challenges of their magical difficulties, like the challenge of possessing a brain or body that works differently than others’, are more than enough to provide plot tension. Another Snape isn’t necessary.

I don’t generally look to “messaging” when I look for a reason to recommend a story. A good story stands on its own and bad writing won’t justify the purest of motives. But as someone who has struggled with a number of issues of my own, I really love that Upside-Down Magic instills the idea that respect and understanding should be the norm for all children. I also believe that neurodiverse kids, whether they struggle with autism, ADHD, deafness, or any set of challenges, should have a chance to see themselves represented as protagonists on their own terms, not as Very Special Victims.

By all means, please, keep James and the Giant Peach, Matilda, and Harry Potter on the shelves. But if your kids devour new books as quickly as mine do, Upside-down Magic is a good addition to the collection.

My kid picked up the second in this series at the school book fair. We loved the main school sport, Kittenball. The players transform into kittens competing for control of a ball of yarn. Nory’s difficulty holding one form, and the ethical questions surrounding a match in which only one player can fly, balance out the advantages of her dragon/kitten hybrid. Those scenes are golden. More fun than quidditch.