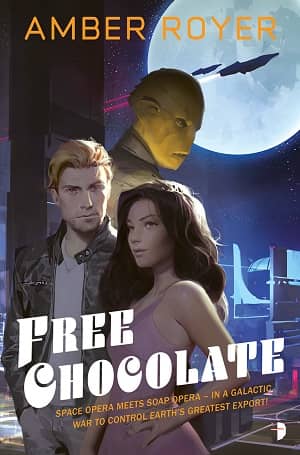 I play a bit with gallows humor in Free Chocolate – after all, half the book takes place on an alien warship where your superior officers can eat you should you disappoint them – and, yeah, it’s a fine balance. You don’t want to make death meaningless, even as the characters acknowledge the precariousness of their situation. Because if death becomes meaningless – or, worse, funny – then the remaining characters’ lives aren’t so important anymore… You know, every writer’s worst nightmare. We want our characters to be like that unnamed actor, finding dignity and a sense of psychological well-being, even in the face of absolute horror and near-certain death.

Speaking of which… I once read that science fiction is a society’s hopes, fantasy its daydreams, and horror its nightmares. (I cannot find the citation for this one – sorry, awesome writer, from the mid-90s.) I think that’s another reason SF writers so seldom venture into pure comedy… with sci-fi, you spend so much time building a world that needs to be convincing, an entire vision of the future, or an alternate past, or an alien landscape, and you put so much of yourself into sharing the things you hope and fear. You want it to be bulletproof in the reader’s mind. It’s hard, then, to acknowledge the absurdity of many of those fears, the impossibility of some of the hopes, to let yourself be laughed at, even in a positive way.

Free Chocolate is a far-future tale in which chocolate is Earth’s only unique commodity… one that everyone else in the galaxy is willing to kill to get their hands, paws and tentacles on. Here’s the description.

Forces array against her including her alien boyfriend and a reptilian cop. But when she escapes onto an unmarked starship things go from bad to worse: it belongs to the race famed throughout the galaxy for eating stowaways! Surrounded by dangerous yet hunky aliens, Bo starts to uncover clues that the threat to Earth may be bigger than she first thought.

Free Chocolate will be published by Angry Robot on June 1. It is 448 pages, priced at $9.99 for both the paperback and digital editions. The cover is by Mingchen Shen.