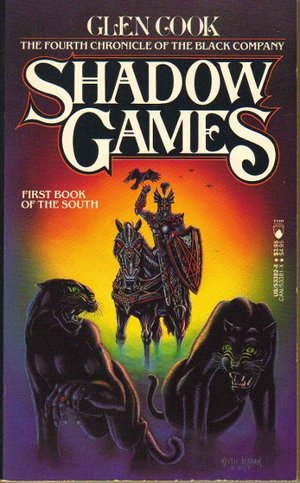 If the previous book, The Silver Spike, told of endings, Shadow Games (1989) is about beginnings.

Picking up at the end of The White Rose (and taking place at the same time as The Silver Spike), Croaker, newly elected captain of the Black Company, decided he and any remaining members would return to Khatovar. With only six soldiers and Lady, it’s the only thing Croaker can think of doing: return the Company to its home. Unfortunately, neither Croaker nor anybody else knows precisely where Khatovar is (other than two continents away to the south) nor what it is. The Company’s annals describe it as one of the Free Companies of Khatovar, but the volumes from the first of the Company’s four centuries of existence were lost somewhere along the way. Trouble magnet that it is, and with a lost history brimming with evil deeds, the Black Company is certain to have a difficult path to Khatovar.

Shadow Games is the fifth of The Black Company books I’ve revisited, and so far my favorite. I suspect some will cry “Heretic!” So be it. Again be warned, there be spoilers below.

Even more than in the earlier books, Croaker is the lead character. As Captain, it’s he who is now responsible for the Company’s actions. Before, he was only an observer of the goings on of great men and women, now he is one of them. Cook presents him as the same snarky romantic from the previous volumes, but now he’s constrained by his position as the face and brains of the Company. The reader also gets to see the various levels of military preparation, only alluded to before, that go on in the Black Company.

As given to introspection as he’s always been, several of Croaker’s ruminations are deeper, and underline his separation from the world beyond the Company.

I ordered a day of rest at the vast caravan camp outside the city wall, along the westward road, while I went into town and indulged myself, walking streets I had run as a kid. Like Otto said about Rebosa, the same and yet dramatically changed. The difference, of course, was inside me.

I stalked through the old neighborhood, past the old tenement. I saw no one I knew — unless a woman glimpsed briefly, who looked like my grandmother, was my sister. I did not confront her, nor ask. To those people I am dead.

A return as imperial legate would not change that.

Something Croaker has mentioned several times over the series is that the Company is constantly changing. At one point in past centuries, the men of the Black Company were actually all black. By the time of the original trilogy, the only such member is One-Eye. As Croaker and friends go south, they slowly enroll new members. The greatest find are the Nar in the city of Gea-Xle. They are the descendants of members of the original Company who put the city’s reigning dynasty in power and stayed on as a hereditary caste of warriors. Croaker describes their leader, Mogaba, as the “the best pure soldier” he ever met. Gradually, Croaker builds on his pitiful remnant and something resembling a real fighting force, able to at least protect itself from the dangers of the road, is reborn.

Broadly seen, Shadow Games is constructed much like a mystery. The Company doesn’t know what it’s looking for. Traveling south along the trail it traveled north centuries ago, they find clues to what the Company was, but few complete answers.

Backward in time. Backward into our own history. A simple enough statement, but an important thought.

There are bandits, monsters, and wizards that must be faced on the journey to Khatovar, but uncovering the truth of the Company’s past seems to be the growing central theme of the series. Cook skillfully unveils a bit here, a bit there, but manages to leave the reader in the dark, waiting, like Croaker, to understand just why everyone they meet is terrified of them.

There are other riddles to be solved by the Company as well. Who are the Shadowmasters who recently appeared in the region between the great city of Taglios and where Khatovar is assumed to be? Powerful wizards, not unlike the Ten Who Were Taken of the original trilogy, they have slowly been conquering their way north toward Taglios. Can the Black Company make its way home without being forced to fight them? What do you think? 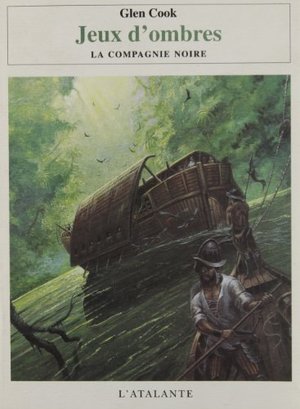 The old man called Eldron the Seer appeared, but now he wore his true guise. He was the supposedly slain Taken called Shapeshifter, half as tall as a house and half as wide, a monster of a man in scarlet.

Wild, stringy hair whipped around his head. His jungle of a beard was matted and filthy. He leaned upon a glowing staff that was an elongated, improbably thin female body, perfect in its detail. It had been among Lady’s things and had been the final clue that had convinced me when Frogface reported its presence. He pointed that staff across the river.

A hundred-foot splash of oily fire boiled up amidst the cypress.

The barge reeled at the kiss of another flat stone. Timbers flew. Below, the horses shrieked in panic.

Some of the crew sang with them. My companions looked grim in the light of the fires.

Shapeshifter kept laying down splash after splash, till the swamp was immersed in a holocaust that beggared both of mine put together. The screams of the pirates became lost in the roar of the flames.

And Shifter kept laying it down.

A great howling rose within the fire. It faded into the distance.

The latter part of the novel centers around the preparation for and the conduct of Croaker’s campaign against the Shadowlords. The ruler of Taglios, the Prahbrindrah Drah, and the implacability of the Shadowmasters, convince Croaker they must fight. I don’t know enough about raising and fighting with armies of poorly trained troops, but Cook manages to make it sound right. When battle comes, it is told with a level of detail and immediacy not found in the series’ other entries. The battles themselves — with carefully wrought plans that just go wrong, unexpected reactions, unthought-of disasters, and simple battlefield friction — feel real, too.

I’ve already described Croaker’s promotion to active protagonist from observer and snarky commenter. Lady, more the object of Croaker’s romantic dreams than anything else most of the time, begins to turn into her own character. The whole will-they-or-won’t-they between Croaker and Lady forms a significant portion, but not all, of their relationship. While she was stripped of her magical abilities in The White Rose, here Lady is gradually regaining her confidence and letting people remember she was the steel-fisted ruler of a vast empire for a very long time.

The rest of Shadow Games‘ cast is as memorable as those of the early books. One-Eye and Goblin continue to bicker, but also to embody an important part of the Company’s history and experiences. Two wanderers from Lady’s old empire, Willow Swan and Cordy Mather, have attached themselves to Taglios and its fate. They are out of their depth in dealing with the Company and the Shadowmasters, but by book’s end they’ve emerged as deeply sympathetic characters. Others who will become increasingly central to the story of the Black Company as the series continues — the Prahbrindrah Drah, his sister, the Radisha Drah, the new Annalist, Murgen among them — begin to take shape as well.

I’ll say it again: five books in, I think this is the series’ highlight so far. There’s a greater weight to the book, particularly the first half in the immediate wake of what was essentially the Company’s destruction. The pall of melancholy that covers nearly everything begins to lift only as the Company, without anyone planning it, gradually rebuilds itself over the trip toward Khatovar.

This book is more tightly focused than the others. It doesn’t feel like connected-but-essentially-separate stories grafted together like the last three books did. Everything ultimately points to the climactic battle between the Black Company and the armies of the Shadowmasters. Cook leaps back and forth between various scenes — the palace in Taglios, the Shadowmasters, and wherever Croaker’s leading from — seamlessly. Some sentences still hit the floor with an unpleasant clunk, but there’s real power in Shadow Games as it moves toward the finale.

Read all my previous Black Company reviews at the links

I think this was where I left off. I culled my holdings back to book one plus The Silver Spike and left it at that.

Good times. For some reason I don’t recall this book as well as others, so was nice to have some reminders. Bring on She Is The Darkness….