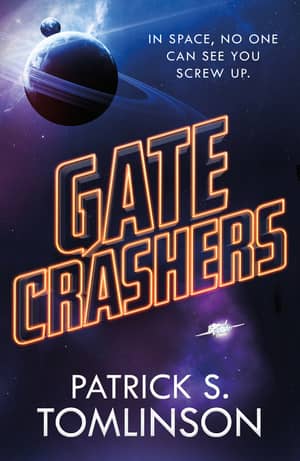 Patrick S. Tomlinson’s debut novel was The Ark, a murder mystery set on a generation ship just before it arrived at its destination. Publishers Weekly called it “Impressive,” saying “Tomlinson’s pacing is beyond reproach, as he deftly crafts an ever more elaborate web of intrigue within the self-contained setting.” The Ark was published by Angry Robot, and it became the opening book in the Children of a Dead Earth trilogy, which wrapped up last year.

Tomlinson’s newest book arrives next week, and it looks like a standalone novel — an easier bite to chew if your reading time is as precious as mine this month. Joel Cunningham at the Barnes & Noble Sci-Fi & Fantasy Blog says “Gate Crashers is a story of space exploration and humanity’s first contact with aliens, plus a healthy dose of irreverent humor.”

The only thing as infinite and expansive as the universe is humanity’s unquestionable ability to make bad decisions.

Humankind ventures further into the galaxy than ever before… and immediately causes an intergalactic incident. In their infinite wisdom, the crew of the exploration vessel Magellan, or as she prefers “Maggie,” decides to bring the alien structure they just found back to Earth. The only problem? The aliens are awfully fond of that structure.

A planet full of bumbling, highly evolved primates has just put itself on a collision course with a far wider, and more hostile, galaxy that is stranger than anyone can possibly imagine.

See all our recent coverage of the best upcoming SF & fantasy here.

Sounds good. I’ve put in a hold at the library, and there’s already a long list.