It’s many ways I’m not sad to have November in the rear view mirror. For one thing, the weather was terrible. More importantly, it brought disturbing changes to one of my favorite genre websites, the Barnes & Noble Sci-Fi and Fantasy Blog, which fired all their freelancers on November 26th. I don’t know if the ongoing changes will also impact folks like founding editor Joel Cunningham, or Jeff Somers, who writes the top-notch book survey every month, but I really hope not. We’ve benefited greatly from their work here at Black Gate, and I hope it continues.

In particular, Jeff Somers’ monthly survey of the best genre books is something I always look forward to, and he never disappoints. His November column — with 25 titles by Neil Gaiman, Myke Cole, Walter Jon Williams, and many others — is a classic example. Packed in there with the blockbuster new books by E.E. Knight, Howard Andrew Jones, and Rebecca Roanhorse, are several genuine surprises. Here’s a look at the best unexpected books on the list.

Kristyn Merbeth’s latest (she wrote The Wastelanders under the name K.S. Merbeth) is a dark and gritty space opera bringing thriller-style crime fiction into a sci-fi universe. The criminal Kaiser family’s smuggling operation relies on the old cargo ship Fortuna. Scorpia resents her brother, and when he leaves to fight in the war she sees the opportunity to finally prove her worth and ascend to captain. But things go disastrously wrong just as her brother, Corvus, returns. The siblings have to put their rivalry aside in order to deal with the fallout of a bloody massacre, fighting to keep themselves alive and their family business up and running. But there’s a lot of history — and a lot of self-dealing — in the mix, which means the right choices are increasingly difficult to make.

The last book we covered by Merbeth was The Wastelanders (published under the name K.S. Merbeth), an omnibus of two Orbit paperbacks, Bite and Raid, and a “no-holds-barred ride through a Mad Max-style wasteland.” Her new book is her first space opera.

Adrian Tchaikovsky is an author who excels at writing both expansively and in shorter, concentrated bursts; his latest expertly balances darkness and hope with a slender page count. It’s set in a crowded, oppressed city where everyone is under the heel of the ruling mages. Coppelia is an orphan and a puppet-maker scrambling survive by picking pockets and stealing what there is to steal. She’s assisted by Tef and Arc, two tiny homunculi made from wood and metal. When Coppelia and her mentor are tasked with tracking down a golem, Coppelia stumbles onto a vicious evil brewing under the streets of the city and becomes ensnared — and it’s up to her two inhuman companions to save her, proving along the way that humanity is about more than flesh and bone.

We’ve covered a lot of Adrian Tchaikovsky’s fantasy here over the years, including The Tiger and the Wolf, Guns of the Dawn, and Children of Ruin.

The concluding book in Cole’s Sacred Throne series whips the story into a frenzy as the devils finally push through the tear in the veil and invaded. On humanity’s side, only 16-year old Heloise Factor — on her way to the capital in her magically powered armor to finally extract revenge for the desolation of her homeland — has any chance of defeating them. But the force Heloise has pulled together is an uneasy alliance between the Traveling People and the Red Lords, and she finds that holding together an army divided by factionalism and mistrust isn’t easy — a fact that drives her to make an alliance with the most unlikely person of all. 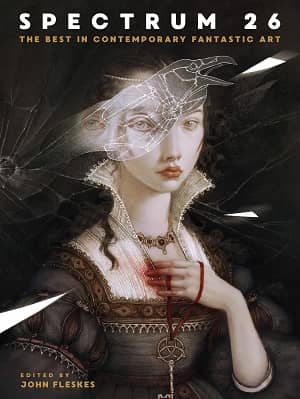 The Killing Light is the third book in The Sacred Throne, following The Armored Saint and The Queen of Crows. Myke’s last guest post for us was Drizzt Do’Urden Simply Won’t Stop Adventuring.

After more than 25 years, Spectrum remains the standard among SFF art books, and the 26th volume is no exception. Spectrum prides itself in rejecting rules and limitations, valuing imagination and ability over everything else — and this mammoth collection sports more than 600 works of incredible variety and visual genius, including work from artists like Yuko Shimizu, Donato Giancola, Tyler Jacobson, Greg Ruth, Annie Stegg Gerard, and more than 300 others, representing the cutting edge in fantasy and sci-fi art.

The Spectrum art books are consistently among the best values of the year, and if you haven’t had the privilege of welcoming one into your library yet, this is a fine volume to start with. Our previous coverage includes Spectrum 20, with a cover by Black Gate cover artist Donato Giancola (and featuring the same heroine he depicted on the cover of BG 15), and Spectrum 16, which contained Malcolm McClinton’s cover for Black Gate 13.

Jeff’s list included half a dozen books we’d already covered in November, including:

The Novice Dragoneer, by E.E. Knight
Starship Alchemon, by Christopher Hinz
Upon the Flight of the Queen, by Howard Andrew Jones
Queen of the Conquered, by Kacen Callender
Quillifer the Knight, by Walter Jon Williams
The New Voices of Science Fiction, edited by Hannu Rajaniemi and Jacob Weisman

I hope we haven’t seen the last of these monthly lists, as I really enjoy them. I guess we’ll find out in a few days, when the December list is due.

In the meantime, check out Jeff’s complete November list at the B&N Sci-Fi & Fantasy Blog here.

The Barnes & Noble Sci-Fi & Fantasy Blog is a great resource science fiction and fantasy readers of all stripes. Here’s a few of our selections from their recent articles.

i am also a fan of Jeff Somers’ writing, not just the columns but also his great Avery Cates series.

Glad to hear that. Yesterday the Barnes & Noble Sci-Fi & Fantasy Blog announced it is shutting down on December 16… so I suppose he’ll have more time to write!