Andreas Seyfarth’s Puerto Rico is one of the most acclaimed board games of the last two decades. I hear a lot about it — at conventions, from friends, and even from co-workers at the Catapult tech incubator where I work in Chicago. It’s a classic euro-game with a simple premise: It’s 50 years after Columbus’s first voyage to America, the age of Caribbean ascendancy, and players are colonial governors on the island of Puerto Rico. Taking the role that best suits them — prospector, governor, captain, trader, craftsman, builder — players manage their colonists, sell goods, erect buildings, nurture plantations, and more to bring a prosperous and thriving colony into being. Its simplicity is a big part of its success, and 17 years after its release Puerto Rico still ranks highly on BoardGameGeek’s All Time Game Rankings.

Its colony-building theme is one common to a lot of space-faring games, of course. Years ago game designer Tom Lehman created a card version of Puerto Rico that, after some tweaks, became the runaway hit Roll for the Galaxy. His latest project is New Frontiers, advertised as a Race for the Galaxy game, in which some folks still see strong roots in Puerto Rico. Here’s an excerpt from William Peteresen’s review, currently the top-ranked review at Amazon.com.

With New Frontiers, Lehman has come full circle. For New Frontiers IS Puerto Rico with a sci-fi skin! If you’ve played Puerto Rico, or ANY of the Race for the Galaxy games, you can learn this game in about 5 minutes! Yep, it’s that simple and easy for any RFG fan! And it plays fast… For non Puerto Rico/RFG [gamers], New Frontiers is a fast action selection/engine-building game set in the far future! Each player is trying to build a space empire that will ultimately garner him/her the most VPs! Each turn, the acting player will choose one of six (seven in the advanced game) action tiles. These action tiles will allow all players to preform [sic] the chosen action (settle, produce, trade/consume, explore, develop), with the active player [getting] a bonus action and the privilege of doing the action first…

The game really is that simple, but it has A LOT of deep strategy and requires some far planning just like the original game, Puerto Rico. But I think New Frontiers is superior to that game because of the theme and because NF has MUCH more variety in terms of strategy… Strangely, New Frontiers is actually the easiest of the RFG games to learn (IMO) … Since nearly everything is also written on the action cards, development and planet tiles in both icon and [words].

New Frontiers has not yet achieved the heights of popularity of Puerto Rico or Roll for the Galaxy, but it appeals to the space-faring gamer in me more than those two titles. What gamer doesn’t dream of guiding a fledgling Galactic Empire to glory? 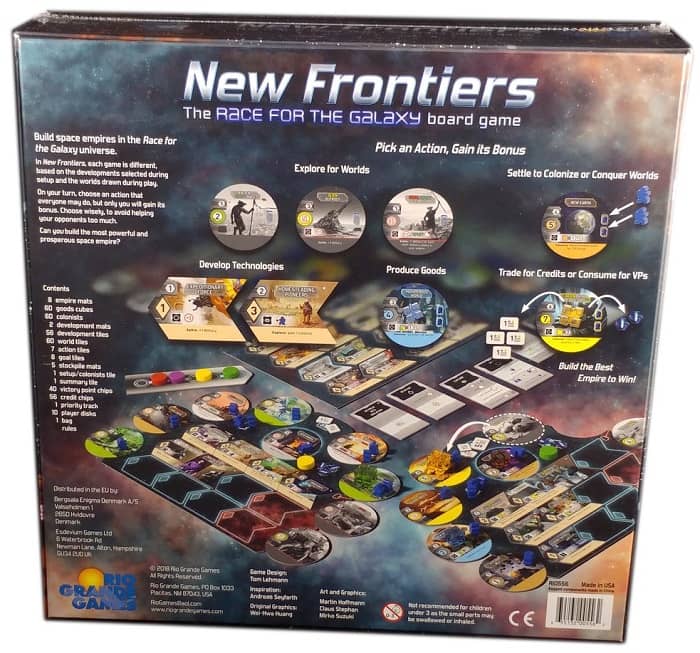 Back cover of New Frontiers

New Frontiers was published by Rio Grande Games in 2018. Here’s the publisher’s description.

In New Frontiers, a standalone game in the Race for the Galaxy family, players build galactic empires by selecting, in turn, an action that everyone may do, with only the selecting player gaining that action’s bonus. The developments to be used are determined during setup, allowing players to make strategic plans based on them before play begins. One group of eight developments is always in play… Many worlds that players can acquire have special powers, with these worlds being drawn from a bag during the Explore phase. Unlike in Race, in New Frontiers worlds need colonists to be settled, in addition to either payments or conquest. Some worlds are “windfall” worlds and receive a good upon being settled. Others are production worlds and receive goods when the Produce action is selected. Goods can be traded for credits or consumed for victory points. Play continues until one or more of four game ending conditions is reached.

The game was designed for 2-5 players, aged 14+, with a 45-90 minute playing time. In theory at least each game has different goals, so no two games are ever alike. 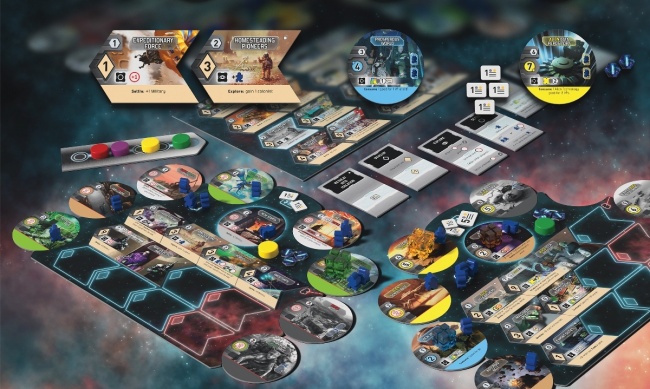 There are lots of detailed reviews out there. One of the more helpful I found was Matt Sall’s piece at Bell of Lost Souls, written in December 2018 when New Frontiers topped “The Hotness” list at BoardGameGeek.

New Frontiers is a strategy game with resource management and simultaneous player actions set in the world of Race For The Galaxy. The goal for each player is the have the most victory points at the end of the game. Victory points are gained in a huge variety of ways.

The main core mechanic of New Frontiers is based on the action tiles in the center of the play area. Each of the 7 action tiles represent one of the actions players can choose to take on their turn. These tiles are shared among all players, so when one player chooses to do that action, that action can’t be repeated until the tiles are reset. However, when a player does an action, all players also get to perform that action, with the active player usually getting a small bonus advantage over the others. Despite the variety of actions available, colonizing planets is likely more core to a player’s strategy than others. Colonizing planets grants players additional resources, goods and new abilities. The game comes with dozens of planets to ensure that no game will play out just the same. Perhaps the second most important action is collecting developments…

What is really nice about games like New Frontiers is that the core mechanics are very straightforward. The depth and strategy come from finding planets and developments that play well off of each other and seeing how that can really get your empire running. Honestly, I think you could adequately explain the rules and stat playing within 10 minutes, with a fair bit of “just play and you’ll see how it works”. Which is honestly my favored way of learning a new game. If you’ve enjoyed games like Puerto Rico, then New Frontiers is going hit all those same notes.

Here’s a look at the game summary sheet from the box (click for a legible version.) 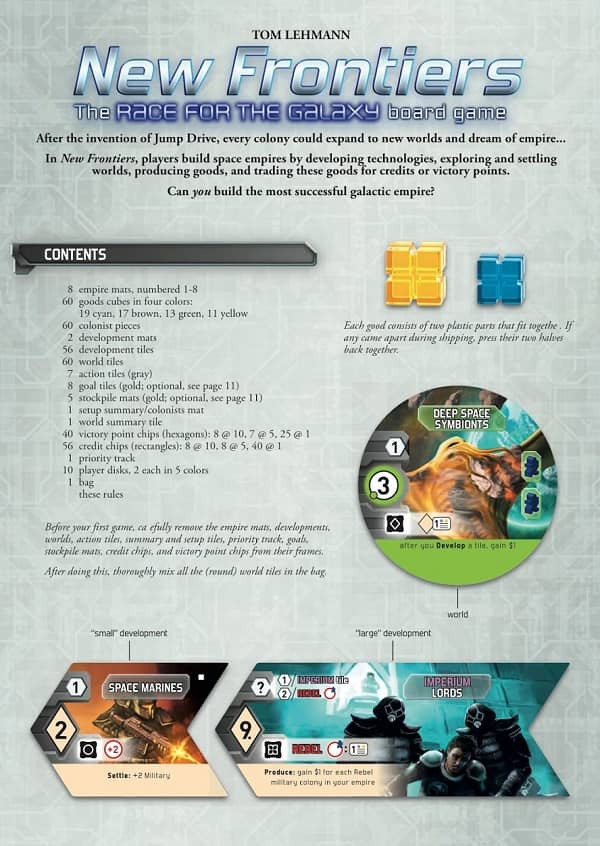 I bought a copy of New Frontiers last month, and you certainly get value for your money — it comes in a satisfyingly hefty box with a lot of components.

Of course, many players still swear by the original Puerto Rico, and I admit the low-tech economy approach has appeal as well. Here’s the back cover of the latest edition from alea/Rio Grande Games. 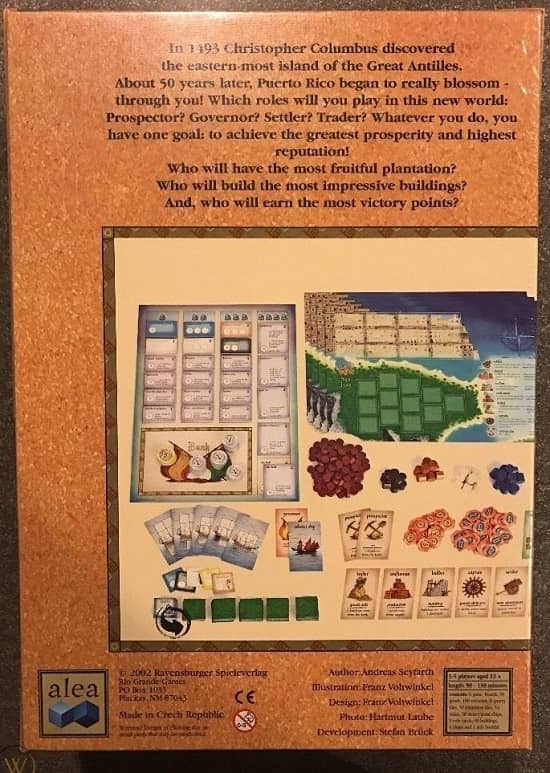 Back cover of Puerto Rico

And here’s a closer look at the contents. 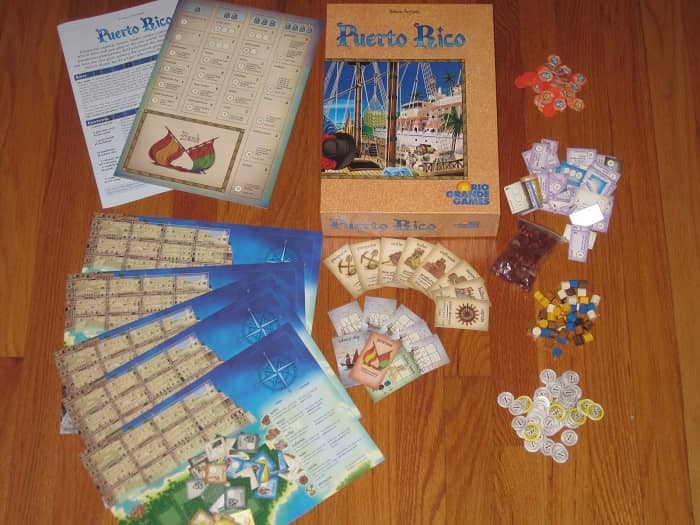 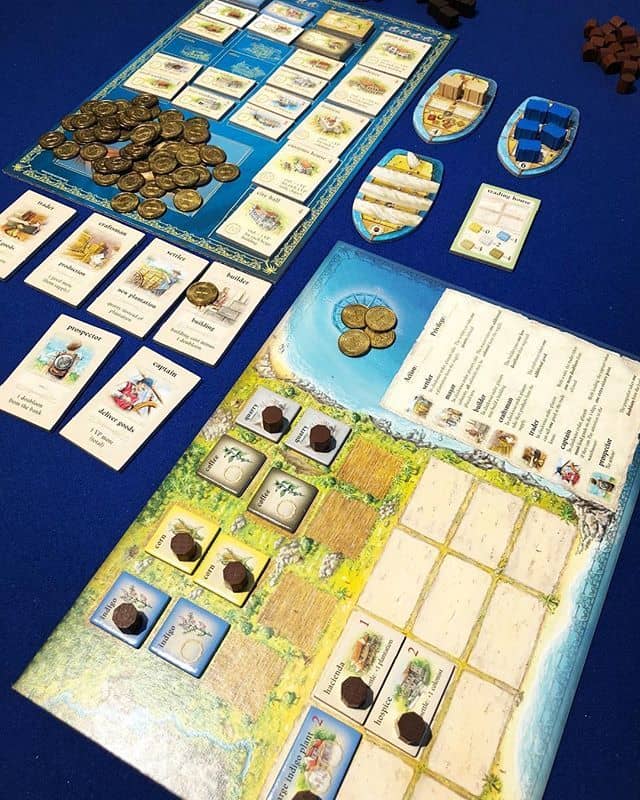 I love a game that uses gold coins as markers, and I think you will too.

Puerto Rico has two expansion sets; there are none yet for New Frontiers, but I bet they’re in the pipeline.