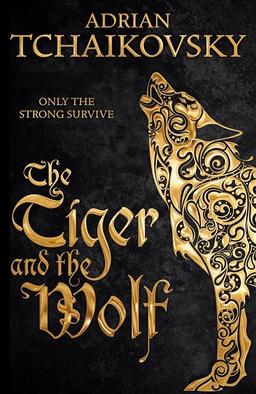 Adrian Tchaikovsky is a British fantasy writer whose claim to fame is the ambitious 10-volume series Shadows of the Apt, published in the US by Pyr, which began with Empire in Black and Gold (2008). In his Black Gate review “Epic Musket Fights and Vampire-Like Magic,” M Harold Page called his 2015 novel Guns of the Dawn “a supremely good read with a satisfying ending.”

His newest novel, The Tiger and the Wolf, kicks off a brand new series, about a young girl coming of age in a dangerous world of shapeshifters on the brink of war. It will be published in the UK next week. No word on a US release date, but Amazon UK will ship the book to the US.

In the bleak northern crown of the world, war is coming

Maniye’s father is the Wolf clan’s chieftain, but she’s an outcast. Her mother was queen of the Tiger and these tribes have been enemies for generations. Maniye also hides a deadly secret. All can shift into their clan’s animal form, but Maniye can take on tiger and wolf shapes. She refuses to disown half her soul, so escapes, rescuing a prisoner of the Wolf clan in the process. The killer Broken Axe is set on their trail, to drag them back for retribution.

Maniye’s father plots to rule the north and controlling his daughter is crucial to his schemes. However, other tribes also prepare for strife. Strangers from the far south appear too, seeking allies in their own conflict. It’s a season for omens as priests foresee danger, and a darkness falling across the land. Some say a great war is coming, overshadowing even Wolf ambitions. A time of testing and broken laws is near, but what spark will set the world ablaze?

The Tiger and the Wolf will be published in the UK by Tor-Macmillan on February 11. It is 590 pages, priced at £18 in hardcover and £11.99 for the digital version. The cover is by Neil Lang.