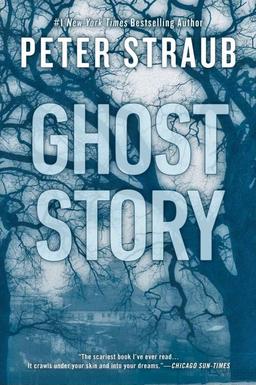 Back as a starving college student when I haunted the used book stores, I came across a dusty hardcover edition of Peter Straub’s Ghost Story, thus discovering the only book that ever scared the crap out of me.

Of course as a lifelong devotee of the horror genre, I had certainly read stories that gave me the creeps before then. But with Ghost Story I was introduced to a whole new threshold of terrifying. Why? Because Straub had the ability to turn a beautiful, sunny day in December, or an ordinary afternoon in a grocery store parking lot, into scenes more blood-curling than any in a crumbling graveyard on a moonlit night in October.

Since that initial introduction, Ghost Story is my go-to read every fall, getting me in the perfect mood for Halloween.

And I confess. It still scares the crap out of me.

Apparently I am far from alone in this as — if we forget about the film version (and please do) — the novel continues to appear on “best of” lists to this day, being widely considered one of the greatest horror novels of all time.

So I was particularly excited to learn that this week Berkley Books is releasing Ghost Story in a new trade paperback edition, as well as in eBook format for the very first time.

In the sleepy town of Milburn, New York, four old men gather to tell each other stories — some true, some made up, all of them frightening. A simple pastime to divert themselves from their quiet lives. But one story is coming back to haunt them and their small town. A tale of something they did long ago. And they are to learn that no one can bury the past forever.

Like soft footsteps creeping up behind you, the horror of Ghost Story sneaks up on the reader, the dread increasing with every page. A menacing and twisty tale that evokes our darkest fears, Ghost Story is the perfect read for long winter nights.

Peter Straub is the author of seventeen novels, and his work has been translated into more than twenty languages. He has won the British Fantasy Award, eight Bram Stoker Awards, three International Horror Guild Awards, and ten World Fantasy Awards. He has received the Lifetime Achievement awards from the Horror Writers Association (2005) and the World Fantasy Convention (2010).

Have you read Ghost Story between splayed fingers with your back firmly against a wall? Or is that just me? Post a comment or drop a line to sue@blackgate.com.

I’ve never read Ghost Story. I tend to think that horror is at its best in the short story or novella range. For me, horror novels rarely give me the creeps like shorter works. Though I can think of some horror novels that really left an indelible impression on me before such as Dan Simmons The Terror, Stephen King’s Salem’s Lot, and Laird Barron’s The Croning.

But I’ve heard a lot of people makes similar comments to yours about Straub’s Ghost Story, as well as his Koko. The fact that it’s being reissued says a lot. Thanks for the notice.

I’m pretty sure I read Ghost Story, probably when I was too young to appreciate it. But Shadowland was the one I kept coming back to.

I read this one many moons ago. I liked it, but it seemed then that Straub was trying to appropriate some of the method of Stephen King without King’s vulgarity. But King’s vulgarity is his great source of strength, so Ghost Story came across as intelligent and often effective, but just as often a bit pallid, a little underenergized.

Totally agree with you, Thomas. The horror genre is well-served by King who is both a product of the genre and its best exemplar. ‘Ghost Story’ on the other hand (although I enjoyed it) struck me as a work by somebody better suited to literary fiction.

I actually like King’s horror stories quite a lot. He gets pooh-poohed too much by some horror snobs. But you think king is the horror genre’s “best exemplar”?

I’d only agree with this if by “best” you meant most published and most popular.

I guess ‘Horror’ to me is a story in which the author is deliberately gruesome in order to provoke a mixture of disgust and fascination in the reader. I think writers of a more literary bent tend to shy away from doing so as they reckon it plays to the lowest common denominator (and they may have a point). Then there are writers whose whole agenda is to appeal to the lowest common denominator. King manages to produce work that has a high gross-out factor. He also manages to create consistently interesting and engaging characters.

What’s my point? Well, by calling him Horror’s best exemplar, I’m paying him something of a back-handed compliment: he has writing chops, but he’s ultimately defined by the genre in which he works and in a reductive way – unlike say, Bradbury, who wrote horror stories but wouldn’t necessarily be defined exclusively as a horror writer. Not sure if any of this makes sense, but there you go…..

Gentlemen,
This may well be the most literary discussion that has ever occurred within the boundaries of Goth Chick News. I mean…Aon actually said “pooh-poohed”.

So before I am forced to start showing up for work in a (omg) suit and start taking my adult beverages in high-ball glasses, I feel I must weigh in.

King is an uneven genius; meaning his spine-tingling stories are almost equally matched by those which were flatter than a day old 7UP. Though he has liberally employed the gross-out factor which, like an 80’s snake-skin mini skirt, can be entertaining when artfully deployed, he can just as easily bring the creep-factor in a more cerebral way.

What I love about Straub is his ability to shun the stock fright elements and create horror from the mundane. Sure, I’ll take vampires and clowns in the sewers all day long, but when you can make my skin crawl describing a dead person sitting on a fence in the middle of a Normal Rockwell scene – now THAT’s my definition of horror.

If you haven’t read Ghost Story lately, please do so. You won’t regret it no matter where your proclivities lie. And as always gentlemen, you make it worth being awake during the day…

Algis Budrys, a writer and reviewer of sf/f, once claimed that Stephen King was America’s Charles Dickens, a claim that I tend to support (for better or worse).

And for those who would enjoy meeting Mr. Straub as well as reading his (truly disturbing) works, he is a regular at Readercon (July, in Quincy, MA, just south of Boston), which makes an effort to put fans and pros into contact.