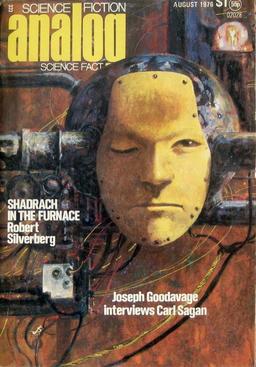 I thought I’d go back to Frank Kelly Freas today, and post one that most folks won’t be familiar with, at least as it looks in the original. This was an interior illustration by Freas for the August 1976 issue of Analog, illustrating A. Bertram Chandler’s “The Far Traveller” (click on the images above for full-size versions). This was one of the tales in Chandler’s Commander Grimes series. The Analog cover, by John Schoenherr, is at right.

Since it was an interior, it was printed in black and white (which you can see above), but the original was in color. I assume Freas did that for the shading effects he’d get when it was reproduced in black and white, but perhaps one of my artist friends can chime in with their thoughts on that.

Art from the SF digests during that period holds a special place for me. This was the summer when, as a 12 year old, I discovered that SF digests were still being published. A few months earlier, I’d found my first SF digests (primarily F&SF from the 1950’s and early 1960’s) at a garage sale in a large barn. But in May 1976, I was spending the day at my dad’s office, and after lunch I went to the drugstore across the street.

There I found the June 1976 issues of both F&SF and Analog, and snapped them up in a heartbeat. After that, I bought them and the other couple of digests then being published religiously. I was fortunate enough many years ago to acquire the cover to that June 1976 Analog (which I’ll post at some point), but the cover for the June 1976 F&SF continues to elude me. But one day!

Great work from Freas for a neglected author and series.

I was about 12 years ahead of you in discovering these digests, particularly Astounding/Analog, and Freas was always my favorite of the artists therein (and on). At the time, it was possible to go to used magazine stores in downtown big city (L.A. in my case) and get twine-tied bundles of an entire year, in excellent condition condition, for a few bucks. I did that, back to Jan 1950 and at one time had the run from then to 1980. Sadly, those are gone, but I do have the two Freas books of his work. I wish someone would put together a complete one.

Thanks for the kind words.
There is not a complete one, but the third volume of his collected works in color, FRANK KELLY FREAS: AS HE SEES IT, was published by Paper Tiger in 2000. I was the co-editor; Mr. Freas was my late husband.