There’s a phenomenon in software development known as feature creep. As you design and build a new product, you can’t resist adding just one more cool feature… until pretty soon your shiny new product is 12 months late, due mostly to a laundry lists of new features that go way beyond the original spec.

Sometimes I think the same thing is happening to Jeff Somers’ monthly Best New Science Fiction and Fantasy list. His May list was packed 24 titles, more than I recall the lists having last year. And his July rundown contains a whopping 28 books.

Not that I’m complaining. It’s  fantastic list, with brand new novels by Bradley P. Beaulieu, Peter McLean, Chuck Wendig, Mercedes Lackey, Amal El-Mohtar and Max Gladstone, Molly Gloss, Christopher Ruocchio, C.S.E. Cooney, Fonda Lee, Timothy Zahn, JY Yang, and many others. Jeff’s not padding the list — there really are that many books this month that deserve your attention. Here’s a look at some of my favorites.

The immense exploration ship House of Wisdom was abandoned by Earth years ago in the wake of the devastation wrought by a deadly virus that killed all but one of the crew on board. The ship sits dark and empty — but Zahra and her people intend to claim it and use it to go home, to their salvation. In order to access the ship, they’ll have to kidnap the lone survivor of the incident in order to use their DNA for access—but that’s the least of their problems. Because House of Wisdom contains something much worse than a virus — something that Zahra and the other are about to awaken. This sci-fi horror thriller looks do outdo the scares of Alien, and comes damn close.

Infused with and inspired by Mexican folk stories, the latest novel from the author of Certain Dark Things is a Mexican folklore-inspired epic that tells the story of young Casiopea Tun, who slaves away keeping her wealthy grandfather’s house until she stumbles on a mysterious wooden box. When she opens it, she releases the Mayan god of death — a curiously charming entity who asks Casiopea to help him regain his throne from his treacherous brother. Casiopea knows the risk — failure means her death — but the rewards are too tempting to pass up. Accompanying the charismatic god to the Mayan underworld and beyond, Casiopea is determined to have a life that goes far beyond the small Mexican town she was born in, even if it costs her everything.

Claire O’Dell ‛s queer reinvention of the Holmes/Watson dynamic continues as surgeon Watson, who lost an arm treating wounded soldiers in a conflict that occurred before the start of A Study in Honor, struggles to work with a prosthetic arm in a future United States split by a second Civil War. When a terrorist attack sees Watson treating the wounded while FBI agent Sara Holmes investigates how the attack was pulled off, the pair once again find themselves working together—and then going undercover, directly into the racist heart of the secessionist-held territories. Grim yet hopeful, this is much more than a homage—though its gripping mystery is certainly worthy of Doyle, it’s a story that gets to the heart of what America is, and what it could be.

We covered the first volume in O’Dell’s new series, A Study in Honor, back in August of last year. 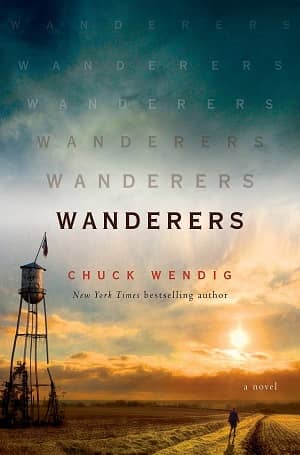 Chuck Wendig’s newest is grander and more ambitious than anything else he’s written, a massive epic that evokes classic Stephen King in all the best ways. One evening a young girl named Nessie begins sleepwalking. Her sister, Shana, is increasingly alarmed as Nessie doesn’t respond and can’t be awakened, rising inexorably to walk in a specific direction. Shana soon discovers her sibling is but one of the victims of a pandemic sweeping the country. As more and more people begin sleepwalking, and more and more self-appointed “shepherds” like Shana seek to protect their loved ones as they wander, a mysterious government agency tries to discover the meaning behind this strange, shambling apocalypse. As society begins to fray and violent forces seek to put an end to the plague, the novel delves into questions of free will, zealotry, and faith.