June has been a fantastic month for new books. My TBR (to-be-read) pile is reaching structurally unsound heights already, and Jeff Somers at the Barnes & Noble Sci-Fi & Fantasy Blog isn’t helping matters any by showcasing nearly two dozen of the best new releases. Here’s a few of his more interesting selections.

Butcher offers up 12 stories set in the world of Harry Dresden, wizard and private investigator working an alternate, magic-filled Chicago. Several stories follow Harry’s adventures with River Shoulders, a smart sasquatch with a half-human son. Others involve Harry’s apprentice Molly Carpenter, crime boss John Marcone, and even Wyatt Earp. The novella “Zoo Day” follows Harry as he takes his young daughter Maggie to the zoo — and since this is Harry Dresden, you know there’s more in store than daddy/daughter bonding. Dresden fans may have encountered some of these stories before, but rereading them in this collection, alongside one all-new tale, should help ease the pain for waiting for Harry’s next novel-length adventure.

Lee brings the Hugo and Nebula award-nominated Machineries of Empire trilogy to its conclusion with a brainy, fast-paced final entry. Shuos Jedao wakes up in the body of a much older man rather than the 17-year old one his memories led him to expect. He’s shocked to discover he’s now a general, commanded by Hexarch Nirai Kujen — a tyrant hiding behind an easy smile — to conquer the haxarchate using an army compelled to obey his every command. Worse — he quickly discovers that the soldiers despise him for a massacre he doesn’t remember committing. Worst — someone is hunting him, seeking to bring him to justice for his crimes. The first two books in the trilogy stretched imaginations and taxed brains, and this one is no different — and no less worth the effort it takes to puzzle it out.

Revenant Gun is volume 3 in the Machineries of Empire series. The previous volumes are Ninefox Gambit and Raven Stratagem. Our coverage includes:

When the robopocalypse comes, America tries to resist, outlawing artificial intelligence and going to war with machine-run fascist regimes. America loses. Badly. Suing for peace, the country is partitioned, with huge swaths of territory ruled by implacable machines. Canadian CEO Barry Simcoe is visiting Chicago when his hotel is attacked, plunging him into a war of survival. Stumbling onto a machine plot to unleash a virus that will eliminate problematic humans for once and for all, Simcoe finds himself connecting with the American Resistance, and discovering a secret that could tip the balance of power within this new world order. Debut author McAulty is an expert in machine learning, giving this look into humanity’s dark future a terrifying sense of verisimilitude.

The Robots of Gotham was also listed as one of the best new SF books by The Toronto Star and Booklist: 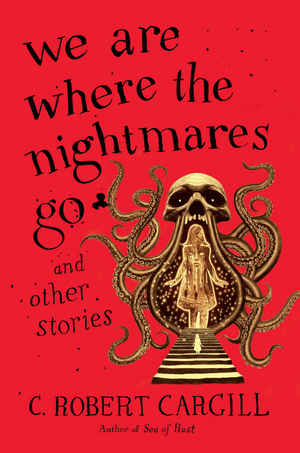 Novelist and screenwriter Cargill (Sea of Rust, Doctor Strange) assembles a collection of 10 chilling stories, all linked by their fantastic, horrifying premises. The living fend off spirits that wish to take their bodies. The extinction of the dinosaurs leads to a battle with undead alpha predators. A little girl discovers a hidden door in her wall, and going through it, encounters less than wonderful. A would-be terrorist gets a surprising offer just before committing a violent act.