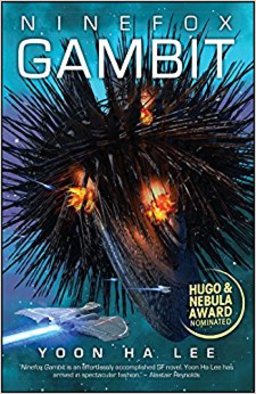 I will freely admit that I don’t think I understood everything in Yoon Ha Lee’s Ninefox Gambit.

Give me a break – there’s a reason I teach History and Social Studies and not advanced calculus. I spent about the first third of the novel trying to figure out what exactly “calendrical heresy” and “formation instinct” meant, which are cornerstones of a world where technology, military strategy and social order seem to be largely based on mathematical formulae.

I’m reasonably certain that the high calendar that dominates most of Ninefox’s human society is a sort of belief system that allows certain “exotic” technologies to exist; basically, if everyone in civilization is on the same page, then the machinery functions properly, but if people start believing a bunch of different things, machinery breaks down. That in and of itself is a brilliant concept – presuming I got it right.

But then you also add in the undead soul of a possibly-insane general bonded to an infantry captain in order to fight a campaign, robotic sentient servitors that take the forms of snakes and other animals, and apparently using antonyms as weapons (which I think was a way of disrupting the concentration of someone manning a protective shield around a space station) and things get even more… alien.

However, as Ann Leckie has said, Ninefox is somehow “human and alien at the same time.” Even as I slowly figured out the larger world of this novel, I was hooked by its characters and the conflict around them. Kel Cheris is great as a fish-out-of-water protagonist, someone comfortable as an infantry soldier promoted to general, and aware that she’s a pawn in someone else’s plot. Shuos Jedao, her undead bonded ally, is sort of like the hallucination of Kilgrave whispering in Jessica Jones’s ear, if Kilgrave recognized he was a psychopath and didn’t have absolute power to manipulate people.

You know you probably can’t trust a guy who murdered thousands of innocent people, including his own staff, and was locked away for four centuries as a result, but when he’s the guy telling Cheris to get some sleep and actually look after herself, it’s hard not to root for him.

All this to say that even though this novel is Clockwork Orange-esque in its worldbuilding, it’s a fabulous and fascinating story. I’m generally not a fan of hard science fiction, so the fact that I’ve added Ninefox’s sequel, Raven Stratagem, to my reading list is a big deal.

An Ottawa teacher by day, Brandon has been published in On Spec, Third Flatiron Anthologies, and elsewhere. He’s also on the programming team for Can*Con, Ottawa’s speculative fiction writing conference, which is happening this year from October 13 to 15. Learn more here: http://can-con.org/cc/. Find Brandon at brandoncrilly.wordpress.com or on Twitter: @B_Crilly

I liked it quite a bit, and also need to read Raven Strategem. I loved all of the evocative names — Fortress of Scattered Needles, e.g. I didn’t worry too much about trying to understand what all of the “calendrical heresy” stuff actually meant; I just treated it like descriptions of abstruse magic in a fantasy novel.