I don’t get over to my local comic shop nearly as often as I’d like to. Fortunately, there are some great resources to let me know what I’m missing. One of the best is the B&N Sci-Fi & Fantasy Blog, which does occasional  surveys of the best new graphic novel releases. Two days ago I reported on Jeff Somers’ summary of the Best Science Fiction & Fantasy Books of August at the B&N Blog; this month I found Ross Johnson’s summary of the 29 top comics and graphic novels of the month just as fascinating.

The War of the Realms is well and truly underway, and Malekith the Dark Elf is using the chaos to his advantage. Thor takes it upon herself to unite the squabbling factions that make up the ten worlds under her command in order to strike back at Malekith and end the war. But he’s ready with an alliance of his own, and the Odinson stands in the shadows.

That new season probably ain’t never gonna happen, but Dark Horse’s official continuation in graphic novel form is the next best thing. This book follows Mal and crew as they respond to a call for help from an old friend, only to find themselves caught between Alliance operatives and a new power player with whom the Serenity crew are forced to strike an uneasy partnership.

In a frozen post-apocalyptic future, the only hope for mankind rests with the mercenary crew of a cargo hauler. A scientist in Mexico City has found a potential cure for the plague that freezes victims from the inside out, slowly taking their humanity with it. But he can’t do anything with it unless he can make the 2,000 mile trek to a research facility on Alcatraz Island. And not everyone wants them to succeed. 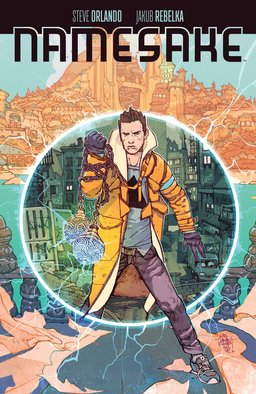 In this urban fantasy, there exists a parallel world called Ektae that aligns itself with Earth every 70 years, bringing magic with it. Jordan Molossus came from the other world, but was abandoned on our Earth, and so has very little interest in the upcoming alignment — until a pair of urns are deposited at his doorstep and he’s tasked with returning his fathers home to spread their ashes. In the process, he’s led to solve the mystery that left him an orphan in the first place.

Check out these other lists from the B&N Sci-Fi Blog: