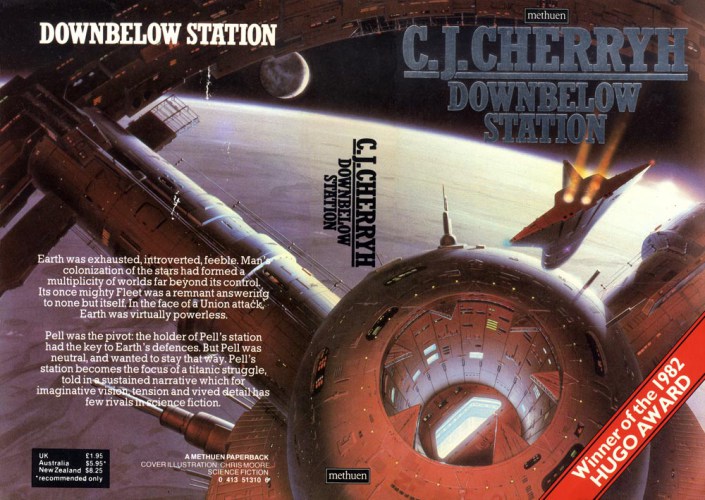 Welcome back to the Black Gate Book Club! We are rapidly closing in on C.J. Cherryh’s Downbelow Station (DbS).  You can get to speed with the first, second, and third rounds.

Okay, page 285 and Fletcher, you are right that things are (finally) happening quick. The Union Fleet has dropped into the system, and the Company Fleet and the militia go out to meet them.  I like the idea that all the ships look the same on scan, whether they are jump-capable merchanters or in-system merchanters, or Fleet Carriers or whatever—they all look the same until they maneuver or start to fire.

Jon Lukas has become the bad guy that he was hinted at with a full murderous take-over of Downbelow Station.   Of course, he’s made a choice on which side he’s on, gambling that the Union is going to win, and from there getting roped into helping Union win.  This puts him with a lot of targets on his back.

Kressich is in the exact same boat, but with more targets on his back, he’s terrified of his people in Q, and terrified of his own security, but once the shooting starts, he is one of the few people who has security and has people.

The relationship of the “leaders” to their armies/militias is interesting.

Signy Mallory (Captain of Norway) does not think a thing about the loyalty of her troops, even going as far as to abandon many of them on Downbelow Station, on the assumption hat if they survive they will still be loyal to her.

The Konstantins never think a thing about their station security. I think they only mention the security head’s name one time.  That said, they cannot control the Company Fleet Military, and have only the most tenuous control over the merchanters they have pressed into the militia.

Jon Lukas has his own security from his company who are very loyal to him, like Angelo Konstantin, it does not occur to him that they could turn on him. His ‘ally’ from Union, that’s different.

Kressich is terrified of his security forces, but at least he has them.

I like that Emilio Konstantin, on the planet itself, has made a decision rhat he isn’t going to let the Company Fleet take all their supplies, although if he can actually pull it off I can’t say.

The Downers are the wildcard in this—although they seem like a pretty weak card. They have managed to make an honor guard for Angelo’s widow (who also happens to be Jon Lukas’ sister), but she is safe due more to the fact the doors are strong and locked than to anything that the Downers have done.

The interesting thing about the downers is that they are needed to keep the station functioning, so they are a resource more than a force.

What I find interesting (and depressing) is that all the murders and all the fighting so far (at least what has happened on the page) NONE of it is Union vs. Company, it is all stationer vs. stationer and stationer vs. merchant.  I’m eager to see what Union really brings to the battle.

I’ve been doing more business travel, which has afforded me time to read DBS.  And while I stand by my initial observations, I’ve come to appreciate this book even more than before.

As war comes to all in Cherryh’s novel, the story gains weight, power and impetus.  By familiarizing the reader with an array of characters in different positions in her future world, the author sets up a well-integrated cross section of a society on the brink of violent change.  And when that change starts going down in earnest, every character the reader has come to know finds their position shaken, their lives in danger, and the pressing possibility that a tremendous shift in how they live may be the only way to continue staying alive at all.

As soon as the war kicked in I had to appreciate the detailed and workaday vision the author so carefully presents in the first half of the book.  The reader is shown how the characters live, how they fit into this complex future environment, so when the brutal dislocation of war sweeps across everything and everybody, the reader can really feel the impact.  So the meticulous world-building and careful introduction of a wide cast of characters ends up serving the plot in a powerful and dramatic fashion.

I found the book went from interesting to gripping to compelling as I watched the author take her carefully wrought world and proceed to shake it apart.  I’m almost done with the novel and I know I’m going to miss it when it’s over.

Good point. Cherryh does spend a lot of time building a world, showing how things (barely) work in t and then proceeds to break it all.

I do have a little quibble (but what is a book club without a little quibbling?) regarding the ‘well integrated cross-section of society”.  Her character are almost all power players.  The Kontsantins, the Lukas family, Captain Signy Mallory,  Q representative Kressich. The Downers and Tally are the only characters who are really small-time (and Tally didn’t used to be small time, he just can’t remember it).

I mean, I get why she does it that way, the book is already pretty massive and having a dock-worker, or a guy/gal from Q, or some soldier from Norway as a POV character would be pretty tricky.

That reminds me that, in a way, DbS reminds me somewhat of Stand on Zanzibar, which also has a ton of characters dealing with big changes in their world.

I raised that earlier when I pointed out there’s no perspective from any of the average refugees in Q. There isn’t one from any of Mazian’s trooper or the merchant pilots either. Cherryh does give you a view from the grunts’ eyes in the Hellburner and Rimmrunners. Here, though, you’re totally right — it’s all important movers and shakers.

Fletcher you are right.  All my best ideas are not, in fact, mine!  It’s as if my memories are malleable… perhaps even fake, taped into me at a young age before.  Cyteen!  I was raised on Cyteen, damn you allll!

Have thoughts on this book that you need to share?  Hit us with ’em in the comments!

Adrian, I love that cover.

It is pretty cool! A lucky find, this late in the process.

Yeah, when things start to fall apart, they REALLY fall apart. Again, I find myself thinking it’s been entirely too long since I read this book (although it’s only been a few years).

I finished this book while I was travelling. Sorry about being so tardy.

It takes a long time to grow accustomed to Ms. Cherryh’s dense writing style and fluency with the invented worlds and technologies. A REALLY long time. The balance of the book is unusual. The exposition is about 85% of the book, and there is virtually no development, with the denoument coming almost immediately after we finally grow comfortable with the various settings.

I did enjoy my slow plod through this book, but there were a few sentences which I read three or four times and still could not figure out what the subject was or any part of what was meant.

I had a hard time telling the characters apart throughout the book. Wikipedia helped me keep them straight. I would have enjoyed a little more independent character development.

If I was a voting member I would give the book a seven out of ten. A second read might raise it a notch, but my reading pile is too deep for any repeats.

I am always up for a book club discussion. The suggestion to wait a month or two sits well with me. Maybe some advance notice for the next one so I can grab a copy and start on time? Thank you all 🙂

Gus, you and I are on many of the same pages on this. I also felt that things seemed a bit rushed toward the end. I mean, I get that things have been building in a slow burn that suddenly burns very quickly, but bam! It’s over.

And, like you, there were several times I couldn’t quite make sense of what was being said. Not a deal-breaker, but still…

Anyone can vote! And your 7 will surely help ground the score!

Re: other books. I think we’re going to take the rest of the summer off. Fletcher is, for sure, and I’m probably out for July. Still, if and when another book comes up we’ll be posting about it.