Welcome to the very first post of the Black Gate Book Club!  What are we up to?  As Fletcher Vredenburgh said in his introduction to the Book Club:

The plan is to read Downbelow Station over the month of June and post a discussion of it each Monday afternoon. This time around, the Book Club participants will include Adrian Simmons, Charlene Brusso, Chris Hocking, and me. We’d love it if you’d read along with us and join in the conversation.

Of course, it is now Wednesday, not Monday, and Charlene had to bow out of this round because life intrudes. Never the less, Vredenburgh, Hocking and I soldiered on! Below is our exchange:

Greetings, all! I’m on the hook for starting the conversation on C.J. Cherryh’s Downbelow Station.

This will be my third attempt to get through this book. The first was in High School (1988), and I was riding high off of Cherryh’s Chanur books. And while this was somewhat similar, it didn’t hold my attention. The second time was post-college (1995) and if the dog-eared page is any indication, I got 169 pages into it. I seem to recall that I was reading it, then three weeks later I was like, “Wasn’t I reading a book?”

I have to say that almost nothing I’ve read so far seems familiar!

Part of what may have tripped me up on the first try is that Downbelow Station starts with a history of human space (about 7 pages), that gets us to the Company v. Union war, and then it jumps right into the action, but the action isn’t standard sci-fi action. The battle (or whatever it was) has already happened off-page, and this is just the fallout from it.

The whole thing seems to be a bit constrained by showing more stuff about what is going on/has gone on. And to the list of planet names and ship names and station names, from the first 7 pages, it adds people names and local place names. I’m on page 73, and while there is a considerable amount going on, I’m not sure what is really going on! So far, I’m not even sure what this book is even about!

That may be very much on purpose. There are Great Events happing in the Beyond and the ever-growing cast of characters are trying to deal with it as best they can with the tools they have.

I find what I’ve read so far to be interesting, but I can’t say that I’ve enjoyed it too much. Or even find any of the characters all that sympathetic—except for maybe Jon Lucas. I’m almost certain he is being groomed to be a bad guy, but he is one of the only people who is taking an active hand in his own future, and that makes him totally stand out from all the other people who are mostly reacting or being coerced into things. 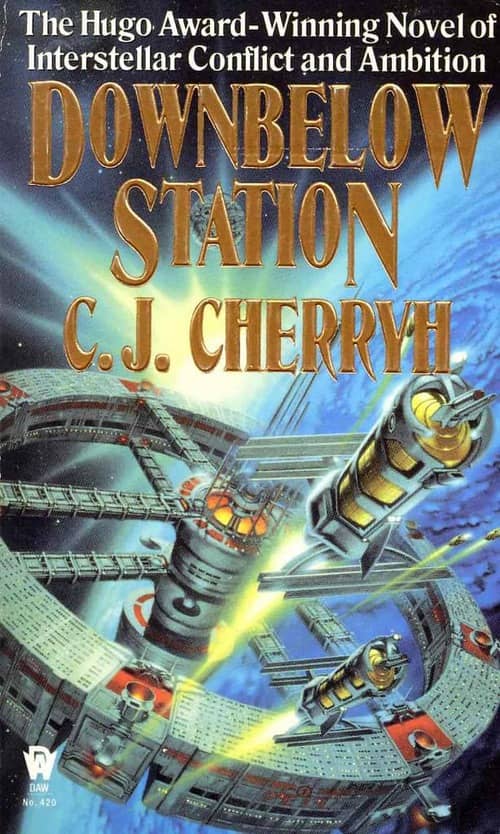 I read this back in 1988 as well, though I was in college. I had already read Merchanter’s Luck, the existing Chanur books, and a few others set in the Union-Alliance universe. While I was still overwhelmed by DbS at first, I had a strong enough understanding of the basic setup. Since then I’ve read more of the associated novels – Heavy Time, Hellburner, and Rimrunners. What this all means is I’m up to speed with what’s going on.

The biggest complaint I’ve read about DbS (and nearly every other sci-fi book by Cherryh) is the lack of clear explanation of what’s going on. One of the ways she described her style is as “intense third person,” and it’s clear why. The reader only gets what’s in front of the characters’ eyes. Since events are so chaotic in-universe, almost no one is sitting around ruminating about the past, recent or otherwise.

Perhaps since I know how the big picture is going to turn out, I’ve been grabbed by what’s going on. I think she did a tremendous job presenting a horrible event – an overwhelming influx of war refugees into the fragile, closed system of Pell Station — from multiple perspectives. Adrian, you mention liking John Lukas. I’m intrigued by the contrast between his hard-headedness regarding the refugees and the more liberal attitudes of the station’s ruling family, the Konstantins. Lukas is the person having dreams of expelling all of them into space, that’s kicking around in the head of the good-hearted Stationmaster, Angelo Konstantin.

Something very interesting I came across getting ready for this post was the foreword Cherryh wrote for the 20th anniversary edition in 2001. She had written most of what would become Merchanter’s Luck, a fast-paced book about a little trading ship, its owner-captain, and a woman from a giant trading ship. Before she finished it, she decided she needed to fully develop and explore the setting she’d created. Gradually, this undertaking took the form of a novel: Downbelow Station. I’ve read it described as the series bible and it really is. 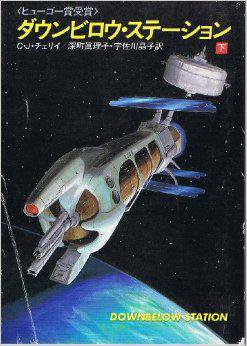 I have a soft spot for Downbelow Station as it was one of the first book recommendations I made to my future wife. She liked it.

I liked it, too, and getting into it again after mumbledy-mumble years I find it’s as heavy, yet oddly gripping, as I remember.

Perhaps this has more to do with what I personally have read in the SF field, but from Cherryh’s introductory setting of the historical stage into the actual flow of the story itself, this book has a real solidity to it. The quick, matter of fact layout of future history has an easy flow and feels like rational extrapolation. Without straining to connect any specifics in history to her story the author nevertheless sketches a convincing future, and then drops us into the midst of it.

I guess you could argue that the first few chapters are a bit disorienting, but at no point did I feel as if I was in the hands of an author who didn’t know exactly what she was doing, what she was showing me, and how she was setting the reader up for what was to come. To be honest, I cannot remember how Cherryh pulls everything together, but so far I feel pretty confident she’s in command of all the elements and will see me through.

Sounds like we all have a different history with DbS, excellent! It also appears that I’m the only person who hasn’t actually finished it.

Chris, I think we are both getting a slightly different vibe from the start of the book. I found things a bit disorienting, and while it was interesting I didn’t find it gripping. Fletcher, the tight 3rd person POV plays its part in the jarring start, but still… it seems to be a little much that, with people who were on the station that was destroyed, and the hell-hole ships bringing them in, and the first responders, yet nobody seems to actually think on it, or fill out any reports on it, no does anybody in power on the station ever read or discuss any report about it. They are in a constant state of panic about the refuges, but nobody actually says “How many people can Pell Station hold?” —  the lack of this kind of basic bracketing seems to be a conspicuous omission.

As far as Jon Lukas wanting to expel the refugees into space — I must have missed that part! I thought he was the one who wanted to build refugee/penal colonies on the planet surface. he is clearly a jerk, but he is the only character I’ve seen yet who actually knows anything about conditions on the surface of Pell, so I lean toward assuming he knows something about what he’s talking about. Like I said, he seems to be the only person with a plan, and the only person not waiting around to see what is going to happen.

Adrian, my fault that I wasn’t clear. It’s the bleeding-heart Konstantin who dreams of spacing the refugees in order to save the paradise his family’s built. Lukas want to use them to finish the planetside projects, something the Konstantins aren’t initially in favor of because it seems too much like slavery.

As to station command not figuring out how many people the station can hold, well, I think that’s one way Cherryh’s showing the weakness of the Konstantins. They react piecemeal instead of making concrete plans right away. It’s several weeks, I think, before they start trying to roundup any of the rioters. Lukas’ plan to transport large numbers of the refugees off world is met with repulsion at first, even though it’s clearly the only real solution anyone’s presented.

As to the confusion level, maybe because I’ve read it, maybe because of familiarity with the series, I’m with Chris on this. I don’t know exactly what’s going on, but I sure feel like Cherryh knows what’s happening. It’s confusing, but that arises from the chaos being depicted, but not a lack authorial control.

That’s where the reading and conversations stand — Black Gaters, share your thoughts in the comments!

Well, as I think I said, DbS was my first or second Cherryh (the other contender being Pride of Chanur), and I’m sure I picked it up on strength of a mention in Dragon Magazine. I would’ve read it in high school sometime in probably 1982? (That date makes sense because 40,000 in Gehenna, which came out in 1983, was my first “new” Cherryh book.)

I think I actually found DbS easier going than Pride of Chanur, for whatever reason — maybe a combination of the opening “history of space expansion” bit and the fact that the characters were actually human beings.

I had mixed luck with other Cherryh books available at the same time — for whatever reason, I didn’t click with the Morgaine books, the Fading Sun books or The Dreamstone (those all being ones I remember from the public library paperback spinners) although these days the Morgaine books are some of my favorites.

As for DbS proper, I’ve reread it so many times over the years that it’s hard to remember exactly how I reacted to it initially, but I think I was probably a little bit surprised that it wasn’t all about Signy Mallory, bad-ass spaceship captain, flying the Norway around and blowing things up; it was probably one of the first books I’d read that spent so much time on the nuts & bolts of administration and bureaucracy, and she did such a masterful job of portraying everything just kind of slowly coming apart in the opening chapters.

My copy is on the way. I will check in after I read it 🙂

Joe H.- I started with the Chanur books, too (one of those impulse pick-ups based on the strength of the cover art!), but I actually found them (the first one, at least) to be easier to get through than DbS.

I read some of Cherryh’s other works- a collection of short stories, I think, and Cuckoo’s Egg. I never really got into her fantasy books.

I, too, may have been put off by why the book wasn’t about Signy Mallory.

Gus G- it’ll be good to have you on board!

Just waiting for my copy to finally be delivered…. !

[…] Black Gate » Black Gate Book Club, Downbelow Station, First Discussion, Second Discussion. Better late than never, here are the opening rounds of the DS discussion (though the third installment seems to be late, too). (Edited to add that Monday’s post appeared later on Wednesday, naturally after I posted. ? Third Discussion.) […]