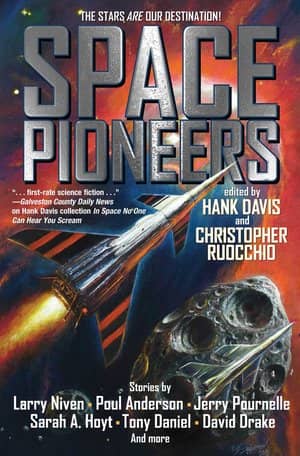 It’s been too long since we’ve checked in with Hank Davis, the mad genius editor at Baen behind the anthologies Things From Outer Space and In Space No One Can Hear You Scream. I figured he had to have something interesting cooking and, sure enough, when I asked him to comment, here’s what he told me.

Coming in December this year, looking for stockings to stuff, is Space Pioneers, a rough of whose cover is now on Baen.com, though the author lineup thereon may be modified…

After that, still in the works is Overruled!, an anthology of stories about courtrooms, lawyers, and other low-lifes. In the future beyond that will be an anthology of military sf stories involving time travel, whose working title is Time Troopers, but that may change. I was going to handle the Psychotechnic League stories by Poul Anderson, but was felled by health problems at a crucial juncture, so it’s in other hands. (The timing of those problems is also why the first volume of The Best of Gordon R. Dickson came out without my usual tedious introductions and notes, but I’ll try to give better value in the next volume).

I do hope that Space Pioneers does well, since I could do a *series* of anthologies on this theme without breaking sweat. My hat’s off (dangerous move for a bald geezer) to my co-ed, Christopher Ruocchio, who did much of the busy work (contracts, nudging agents, etc.) while I was still recovering, and who also talked me into using two Poul Anderson yarns, a suggestion I had absolutely no problem with (and I have a third in mind if there’s a Volume II). And that’s the current state of the pipeline. I should remind everyone that these will all be mass market paperbacks.

Sounds like a great line-up! Space Pioneers in particular looks like a terrific book, and a splendid addition to Hank’s catalog of top-notch anthologies. I’ll definitely be keeping an eye out for it, and making some more noise about it here as we get closer to the release date.

Here’s the description for Space Pioneers from the Baen website:

DON’T YOU KNOW YOUR FUTURE IS IN SPACE?

Since the dawn of time, humankind has felt the urge to explore the four corners of our globe. To push at the boundaries of our world and discover what lies over the horizon. And since the dawn of science fiction, writers have wondered about the next frontier: the one that lies Out There.

Here then, a generous collection of stories that reach out into the unknown void, finding awe, wonder, other minds — even terror. But always going beyond the world we know to explore a universe strange beyond the outermost limits of human imagination. Stories of brave men and women who risk all to explore, colonize, and settle the vast reaches of space. 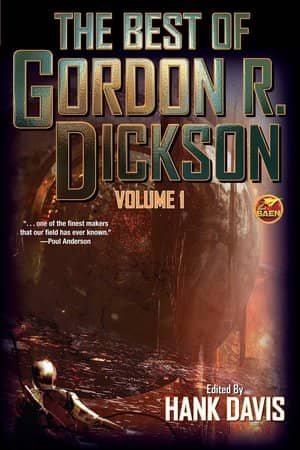 Hank’s last book for Baen was The Best of Gordon R. Dickson, Volume One, and he shared some additional detail on his plans for the next one.

One thing I was going to explain was the lack of introductory material in Volume I of The Best of Gordon R. Dickson, which I was scheduled to do about the same time I became a drooling zombie for about four months. Also, I had told the other Baeniacs that, if I was unable to do an intro, they should add a GRD story, to keep the book from being too short, but that wasn’t done, and the book is too short (under 300 pages IIRC — I don’t have a copy here to check). I’ll try to make up for that with Volume II.

Check out the free sample of Volume I at the Baen website.

Hank Davis has been keeping classic science fiction alive in paperback on store shelves. If you’re a fan of short genre fiction, you have a lot to be thankful to Hank for, including:

Hank Davis is also a mystery fan, and was, for a while, in the mystery apa DAPA-Em, where I met him. He’s done some very nice anthologies. As I’m a fan of Poul Anderson, as he is, I’m always fled to see Anderson’s work in these books.