No one out there today is doing the work Hank Davis is doing — collecting vintage SF and fantasy into handsome mass market anthologies.

Yes, Paula Guran (Street Magicks, Weird Detectives) and Neil Clarke (Galactic Empires) are producing great reprint anthologies — but they both focus almost exclusively on 21st Century authors. Davis is the one serious editor left still plumbing the pulps and vintage SF magazines of the mid-20th Century, and putting authors like Murray Leinster, John W. Campbell, and Poul Anderson into mass market. His recent books (including Things From Outer Space and In Space No One Can Hear You Scream) include some of my very favorite recent anthologies.

His first anthology of 2016 was Worst Contact, a collection of tales of alien contact gone wrong. It contains two of my all-time favorite SF stories, Terry Bisson’s brilliant “They’re Made Out of Meat,” the story of an alien survey team that makes a profoudly disturbing discovery on the backwater planet Earth, and Fredric Brown’s chilling and powerful “Puppet Show,” in which the US Army is called in to greet a strange alien and his donkey walking out of the desert.

Here’s a sample of some of the magazines and anthologies these tales originally appeared in.

Worst Contact was published by Baen Books on January 5, 2016. It is 362 pages, priced at $14 in trade paperback and $8.99 for the digital edition. The cover is by Stephen Hickman.

A lot of familiar names in that ToC. Glad that Hank’s still doing great editing.

Right down my alley!

I’m old enough to have read the old SF magazines when they came out, but I still missed them, partly because my interest in genre SF developed rather late, and partly because I live where these magazines were not distributed.

So anthologies are my gateway to a past I missed completely. And as Johns says, nobody else is regularly bringing us old stuff between new covers. Well, Mike Ashley, perhaps, but his last anthology of this type came out in 2013.

So, more power to Hank Davis! His anthologies are a very small corner of the genre book market, but it’s a corner I visit often.

Fantastic stuff but where is Damon Knight’s “To serve man”?

He’s got another one being released this week! If This Goes Wrong. All about the potential downside of the future. With stories by Robert A. Heinlein, Sarah A. Hoyt, Fritz Leiber, Gordon R. Dickson, Lester del Rey, Christopher Anvil, Fredric Brown, and others. 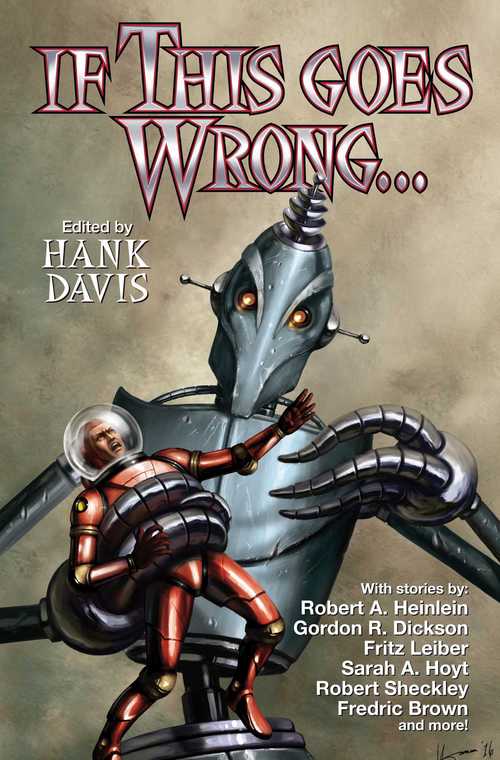 I was surprised to see it was by Stephen Hickman… I haven’t seen a Hickman cover in years. Made me curious about whether it was new or (more likely) a reprint… but if it’s a reprint, I couldn’t tell you where it originally appeared.

> So, more power to Hank Davis! His anthologies are a very small corner of the genre book market, but it’s a corner I visit often.

The last Davis anthology I covered (Things From Outer Space) was a mass market paperback, which I was delighted to see. Worst Contact returns to the trade paperback format, and I think the same is true of If This Goes Wrong. Not that there’s anything wrong with trade editions… but it was cheap mass market anthologies that truly introduced me to vintage SF in the 70s, and I’d hate to see this generation denied the same gateway.

> Fantastic stuff but where is Damon Knight’s “To serve man”

I would’ve also tried to find room for Heinlein’s Goldfish Bowl, all other things being equal.

Interesting that he was able to include a Heinlein story.

The VanderMeers recently noted that they were unable to obtain reprint rights to a Heinlein story for THE BIG BOOK OF SCIENCE FICTION, and that was surely the retro anthology of the year.