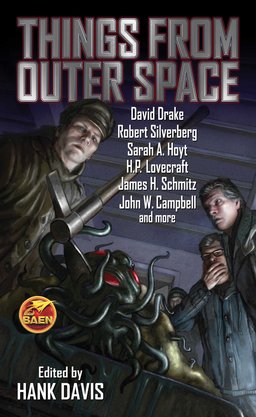 Hank Davis is my kind of editor. He’s one of the very few out there still mining pulps and science fiction digest magazines and packaging them up for a modern audience, in terrific books like In Space No One Can Hear You Scream (2013) and The Baen Big Book of Monsters (2014). In short, he’s one of the only folks introducing the work of Edmond Hamilton, John W. Campbell, Clifford D. Simak, Randall Garrett, Fritz Leiber and others to a modern audience — or at least, one of the very few doing it in affordable mass market editions, which is the way I discovered all those great wrters, mummnly-mumble decades ago.

Things From Outer Space is Hank’s latest, an original paperback collecting tales of “Mostly very, very bad things that want to harm humans and destroy Earth. Or take it for their own. Original stories and reprints of classics from the scary side of science fiction!” Here’s the description.

THE THINGS ARE COMING…

As we all know, in space, no one can hear you scream. Which doesn’t mean that anyone is safe just because they’re standing on the soil of planet Earth, because if a thing from out there drops in, screaming probably won’t save you.

Earth has spawned myriad unpleasant life forms which are bad news for humans, ranging in size from the Ebola virus to the great white shark up to the Tyrannosaurus Rex (extinct, fortunately for us) — and that’s just one planet. What even more deadly life forms might the billions of planets in our galaxy have spawned? And suppose the things are intelligent and capable of crossing space and coming here . . .

E.T. might have been happy eating Reese’s Pieces, but other visitors from the void might have less dainty appetites. And there are probably worse things than merely being eaten…

Alas, description notwithstanding, there is no contribution from Murray Leinster. But there are twenty stories of nasty alien creatures, new and old. Here’s the complete Table of Contents.

You can read Hank’s introduction, and sample several of the stories, at the Baen website. Here’s a snippet from his entertaining intro:

In the first of the Star Trek movies, Bones McCoy beams onto the massively refurbished Enterprise and Admiral Kirk tells him, “There’s a thing out there,” at which point McCoy breaks in, “Why is it any object we don’t understand is always called a thing?”

Kirk ignored the question, but I think he should have said, “Because it sounds so cool.”

And it does. Particularly if it’s italicized: Thing. 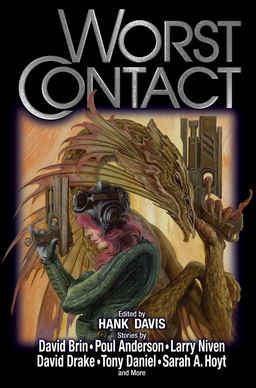 He’s got several fine anthologies from Baen we haven’t covered, as well. Shame on us.

As Time Goes By — Time travel tales of love and the future, alternate realities, and the worlds of fantasy (February 3, 2015)
Future Wars… and Other Punchlines — Humorous Military Science Fiction (September 1, 2015)
Worst Contact — Stories of Alien Contact Gone Wrong (January 5, 2016)
If This Goes Wrong — Tales of the Downside of the Future, some humorous and some not (December 27, 2016)
The Best of Gordon R. Dickson Volume 1 — Forthcoming (April 4, 2017)

Things From Outer Space was published by Baen Books on August 23, 2016. It is 576 pages, priced at $7.99 in mass market paperback. The cover is by Alan Pollack.

I’ve enjoyed all of Hank Davis’s anthologies. He provides a nice mix of old and new SF stories. I’m looking forward to THE BEST OF GORDON R. DICKSON Volume 1. Dickson is an underrated writer!

I was in an apa with Hank years ago. Glad to see he’s still doing good work.

I love any editor who brings me a grab-bag of old stories in an affordable new edition. Fortunately I’m aware of Hank Davis, although I have only one of these books (As Time Goes By).

John says Davis is one of the “very few” doing anthologies like this in mass market paperbacks. But are there any others at all? I can’t think of any.

> I’m looking forward to THE BEST OF GORDON R. DICKSON Volume 1. Dickson is an underrated writer!

Agreed. He’s been virtually forgotten since his death, which I find surprising. And I find it hard to believe that he’s never had a BEST OF collection! Glad to see that finally happen.

> I was in an apa with Hank years ago. Glad to see he’s still doing good work.

He’s certainly been enormously productive… five anthologies in the last two years, and more on the way! As long as he keeps doing them, I’ll keep buying them.

> John says Davis is one of the “very few” doing anthologies like this in mass market
> paperbacks. But are there any others at all? I can’t think of any.

Paula Guran publishes several anthologies with Prime each year, and she’s been working on a massive S&S retrospective.

But of course the gold standard for mass market reprint anthologies is Eric Flint, who has done masterful work bringing Murray Leinster, James H. Schmitz, and many others back into print in attractive and affordable editions.

> I was in an apa with Hank years ago. Glad to see he’s still doing good work.