We continue to survey the best omnibus volumes for collectors out there. And at long last, we come to one of my favorite short story writers, and one of my favorite omnibus sets: the seven volumes collecting the science fiction and science fantasy of James H. Schmitz, published by Baen Books.

The Baen reprint program largely began with these volumes in 2000, and I still believe they may be their crowning achievement. 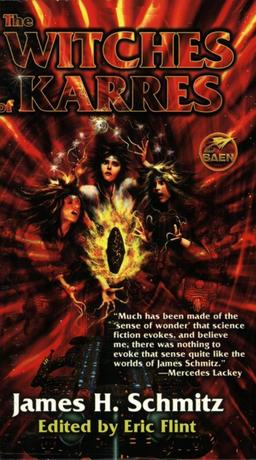 In his introduction to “Second Night of Summer” in the marvelous anthology The Good Old Stuff (which I reviewed for SF Site way back in 1999), Gardner Dozois nicely summed up the appeal of Schmitz’s fiction:

Although he lacked van Vogt’s paranoid tension and ornately Byzantine plots, the late James H. Schmitz was considerably better at people than van Vogt was, crafting even his villains as complicated, psychologically complex, and non-stereotypical characters, full of surprising quirks and behaviors that you didn’t see in a lot of other Space Adventure stuff… And his universes, although they come with their own share of monsters and sinister menaces, seem as if they would be more pleasant places to live than most Space Opera universes, places where you could have a viable, ordinary, and decent life once the plot was through requiring you to battle for existence against some Dread Implacable Monster; Schmitz even has sympathy for the monsters, who are often seen in the end not to be monsters at all, but rather creatures with agendas and priorities and points-of-view of their own, from which perspectives their actions are justified and sometimes admirable — a tolerant attitude almost unique amidst the Space Adventure tales of the day, most of which were frothingly xenophobic.

Similarly, Schmitz was decades ahead of the curve in his portrayal of female characters—years before the Women’s Movement of the ’70s would come along to raise the consciousness of SF writers (or attempt to), Schmitz was not only frequently using women as the heroines in swashbuckling tales of interplanetary adventure — itself almost unheard of at the time — but he was also treating them as the total equal of the male characters, every bit as competent and brave and smart (and ruthless, when needs be), without saddling them with any of the “female weaknesses” — like an inclination to faint or cower under extreme duress, and/or seek protection behind the muscular frame of the Tough Male Hero) that would mar the characterization of women by some writers for years to come. 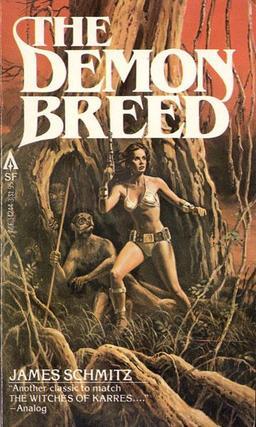 The Baen volumes began with a four-volume set collecting the complete stories of “The Hub,” a region of semi-civilized space. It think it’s best described by the back-cover text from The Hub: Dangerous Territory.

The Hub is a Very Dangerous Place.
But So Are Its Citizens.

The Federation of the Hub: thousands of rough, ornery and tough-minded human worlds with only the subtlest of interstellar governments holding them all together. Stable at last after centuries of war, the Hub is now prime real estate… making it a merciless arena for the conflicting schemes of criminals, unscrupulous corporations, and invaders from beyond the edges of Federation space.

But the Hub is well-defended, and not only by professional heroes such as Telzey Amberdon and Trigger Argee. In Hub Space a citizen is expected to stand up for herself, blaster in hand, as needs must; so when Trouble comes Hubward in large doses, there are an awful lot of armed citizens waiting for it….

The first four Baen collections are:

The Complete Federation of the Hub

Those volumes were successful enough that Eric Flint and Baen issued three more: 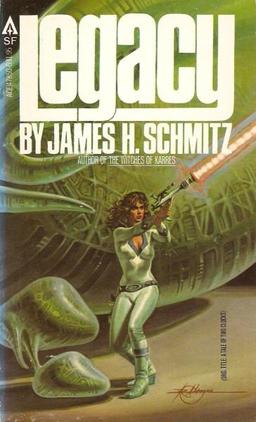 The Baen collected James H. Schmitz is not without controversy, particularly for Flint’s sometimes heavy-handed editing,  as Rich Horton noted in an article he wrote for Black Gate 14:

Some years ago I noticed a commotion on the Usenet newsgroup rec.arts.sf.written. Eric Flint, a Baen writer who had attracted positive notice with his first couple of novels (particularly 1632), was going to edit for Baen a series of collections of the stories of James H. Schmitz.

This was widely regarded as wonderful news… with one exception. Flint proposed to edit the stories for the modern reader, a mixture of sensible changes like removing redundant material in stories published back to back, and less obvious changes like eliminating mentions of characters smoking, and updating slang to avoid dated phrases like “newshen.”

Even more radically, in at least one case Flint changed the names of characters to make an unconnected story fit into another series, and in another case, he sharply cut a story on the grounds (valid, in my opinion) that he was improving it. The result was a bit of a dustup – and, in one curious case, an opportunity for one of Flint’s opponents in the thread to have his first novel published by Bean. (This writer, Ryk Spoor, has since become a Baen regular and a collaborator with Flint.)

What was almost – but not quite – missed was the central fact that the end result of Eric Flint’s efforts was eventually to restore every word James Schmitz published (well, every word but “newshen” and a few others!) to print. Baen began with a collection featuring Schmitz’s most popular character, Telzey Amberdon, and continued with a number of books including well-known stories such as the Agent of Vega pieces, and finally concluded with a generous trade paperback containing the rest of Schmitz’s work, Eternal Frontier.

This was in the end extremely rewarding. Schmitz’s work is very fun, and it was a delight to see it all available. I like it enough that I had tracked down most (but by no means all!) of his stuff in used bookstores. But there were stories I had no idea existed, from mystery magazines for example.

And Baen (that is to say Flint) wasn’t done. Before long a number of collections of such well known but not well reprinted writers as Randall Garrett and Murray Leinster were back in print.

If you have any interest in space opera, the novels and short stories of James H. Schmitz are well worth investigating. Most (but not all) of the Baen paperbacks are out of print, but are currently available in digital formats, and all are readily available at reasonable prices from various sellers online. 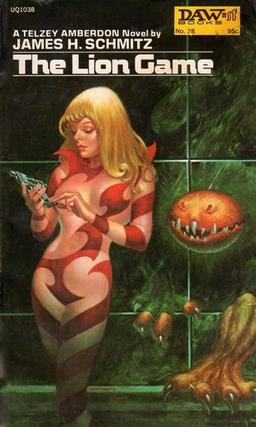 Vintage Treasures: The Witches of Karres
James Schmitz’s The Demon Breed: SF as a Test-bed for Living (With Women who Kick Alien Butt) by Mark Tiedemann
Back to the Future: Modern Reprints of Classic Fantasy by Rich Horton
A Review of The Witches of Karres by Isabel Pelech

I made sure to grab all of these as soon as they came out (and I’ve done the same with the A. Bertram Chandler collections – of which there is a new one just out.) Baen is doing a great service to vintage SF lovers with these books.

> Baen is doing a great service to vintage SF lovers with these books.

Indeed! And they deserve support — and lots of it.