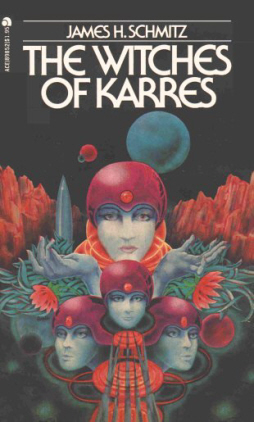 I decided to review The Witches of Karres mostly because I remember seeing some sequels, written by different authors, as James H. Schmitz died in 1981.

I’m not surprised; The Witches of Karres feels like it should have been a series all along. The setting seems designed for multiple adventures. The book itself is less a space opera than a space operetta — it never takes itself too seriously — but it’s still distinctly an adventure story, not a straight-up comedy.

Captain Pausert is a decent and friendly man, perhaps a touch too in love with his notion of himself as a square-jawed space adventurer. For instance, we find out quite early in the book that he faked a log entry about a desperate fight against pirates when he actually just spent a few hours blowing up asteroids — partly to test his ship’s guns, partly for the fun of it.

Still, he can’t resist helping someone in trouble, especially when that someone is an apparently helpless teenage slave girl. Despite the anti-slavery laws of his native planet, he’s quickly maneuvered into buying her, then her two younger sisters.

Pausert may be a bit bumbling at this point in the story, but he’s not quite stupid; he notices that the slave-owners are extremely eager to sell, and that there’s something slightly off about the three girls. 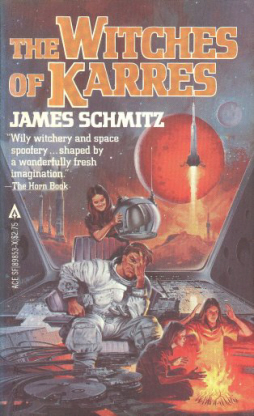 And that’s before the middle child, Goth, decides to repay him by telekinetically stealing a fortune in jewels, which gets him in trouble with the planetary police force, which prompts the children to use a mystical superdrive to get his ship out of danger, which gets him on the wanted list of almost everyone, everywhere, including the galactic empire and his own planet’s government.

This is a science fiction book, but it has a fantasy-esque feel. Pausert and Goth end up near a space wilderness called the Chaladoor, a region haunted by the Megair cannibals, the mysterious Sea of Light, the alien, hostile phenomenon known as Worm Weather, which has been known to mind-control, madden, or outright kidnap human beings, and the dread pirate Agandar.

Only some of these are explored in this book; others merely make an appearance to demonstrate that the galaxy is not tame.

Pausert is being stalked by an energy being called a vatch, an incredibly powerful being that believes humans are imaginary characters in a fascinating dream or game. Also, there is the magic that Goth and her sisters use, called klatha, well-developed by the inhabitants of Karres — and left largely mysterious, because, as Goth tells Pausert, telling people too much about klatha actually inhibits their ability to use it later, and he definitely has the gift.

I don’t know whether this is a good-natured poke at how some heroes seem to do everything by intuition, or just a plot device to keep everything from being explained at once. Either way, it prevents Goth from merely being the voice of exposition. 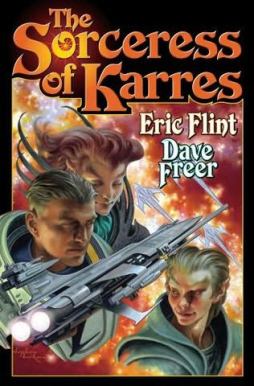 Goth, the major witch character, is just as much the book’s hero as Pausert. She’s the brains of the operation, despite being ten or so. She’s powerful, but not to the point where she destroys tension or becomes a deus ex machina.

She has a slightly telegraphic way of speaking that gives her a distinct voice even though the entire book is from Pausert’s viewpoint. Some may be put off by Goth’s announcement that she means to marry Pausert when she’s old enough; however, Pausert privately dismisses the idea and treats her as a trusted ally and friend.

Goth’s presence and strong characterization are especially notable since The Witches of Karres was published in 1966, when science fiction was still somewhat considered a boy’s genre.

In short, this is a fun, light-hearted story. It’s not for anyone who demands hard science in their science fiction, but it might appeal to people who want to see fearless space adventurers affectionately deconstructed.

It’s also great for anyone who wants a good old-fashioned adventure with strange planets, space pirates, alien menaces, the galactic empire, and more than one brave, intelligent witch.

[…] Pelech reviewed the book for us in 2010 (an assortment of covers accompany that piece), commenting on the science […]