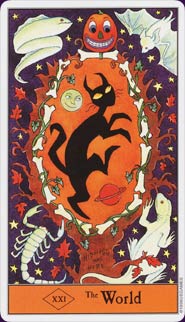 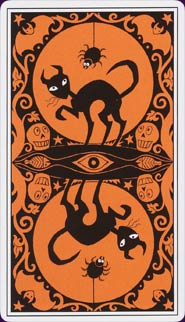 October has come, my favorite time of the year. I have my special rituals during this season, such as reading classic weird tales (Algernon Blackwood and M. R. James are among my top picks for seasonal fun) and evenings watching Universal and Hammer Horror films.

Another tradition I have is dragging out of the sock draw my Essential October Totem: Kipling West’s The Halloween Tarot, published by U.S. Game Systems, Inc. If I ever needed to describe to someone all the wonders of my favorite holiday, all of its joys and sensations and beauties and cross-cultural marvels, I would simply hand them this deck of seventy-eight colorful cards with their black-and-orange silhouetted backs and say, “Look through that. Then you’re ready for October. Now, where’s the candy? You got Pixy Stix? Okay, then I’ll take a Baby Ruth.”

Collecting tarot decks is a minor hobby of mine, one I don’t indulge in that often, but over a decade has brought into my hands about forty different decks, ranging from historical reproductions of the original tarocchi decks of fifteenth-century Italy (back when tarot was simply a game, the origin of the modern playing deck) to utter modern weirdness like The Tarot of Baseball, where The Devil has become The Manager. Tarot, for me, is strictly an art hobby with some historical interest and potential for creating stories from the images. I know the meanings of the archetypal symbols on the cards and the history of how these meanings got invested into a deck of playing cards (there’s some fascinating Renaissance history and 18th and 19th-century occult revival stuff behind it), but have zero belief in the New Age “fortune-telling” aspect of tarot. I just love seeing how different artists interpret the symbolism.

The Halloween Tarot deck is an idealized nostalgic childhood look into Halloween traditions—which include fortune-telling games at parties. Kipling West’s artwork is simple, sturdy, and extremely autumnal and affecting. She based the images on the most famous of modern tarot decks, the Waite-Smith—sometimes called Rider-Waite, after the Rider Card Company that first published it in 1910—that was developed by Arthur Edward Waite and illustrated by Pamela Coleman Smith. This is the deck that almost everyone thinks of when they imagine tarot; Smith’s images, especially for the numbered cards (which were rarely fully illustrated in older decks) have become the standard template for most modern deck interpretations.

The Halloween Tarot deck is definitely a “Waite-Smith Clone,” but the way West uses classic Halloween images, from folklore to the Gothic to the 1930s monster movie pantheon, is ingenious and puts it far above a simple slapping down of a few pumpkins and witches over Pamela Coleman Smith’s pictures. There is definitely a “homespun” feel to what Kipling West achieved with the deck, as if this Halloween takes place in a magical childhood world not far removed from Ray Bradbury’s Something Wicked This Way Comes (although much cheerier).

In the paperback book written to accompany the deck, author Karin Lee discusses the origins of West’s designs:

The Halloween Tarot deck began as an impish gleam in Kipling West’s eye. She started composing the cards with the traditional images of the “Rider deck,” designed by A. E. Waite in 1910, and then twisted, turned, and tweaked them to create a festive, if slightly freakish old-time Halloween world. Since Halloween archetypes are fairly limited, the characters on the cards also emerged from old horror movies and circus images, and from German-made Vegetable People that were popular Halloween toys and decorations in 1920s America. 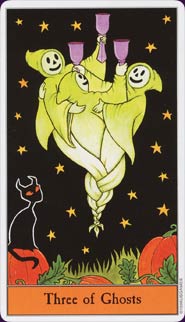 Except for the 1930s and ‘40s movie monsters, The Halloween Tarot deck does create a feeling of a rural 1920s American harvest festival with a ghoulish touch and a weird circus in town. (Again, I find myself thinking of Something Wicked This Way Comes.) It’s a sumptuous and cozy place, and every Halloween I want to go live there . . . even more so than I would want to live in Halloween Town in The Nightmare Before Christmas.

The entire deck can be viewed as something like a book itself, with the main character a black cat that appears somewhere on every single card—although he’s a bit of a challenge to find on the Eight of Imps. The cat moves through four different “kingdoms,” one for each of suit, and then follows the various odd characters and monsters of the twenty-two trump cards until the cat at last becomes the center of the image—and the Halloween world—in the final card, The World.

Like most standard contemporary tarot decks, The Halloween Tarot contains seventy-eight cards divided into four suits of ten numbered cards and four court cards (the Page and the Knight merged in modern playing cards into the Jack, while the King and Queen remained) and a separate set of twenty-two “trump” cards, numbered from 0 to XXI: The Fool, The Magician, The High Priestess, The Empress, The Emperor, The Hierophant, The Lovers, The Chariot, Strength, The Hermit, The Wheel of Fortune, Justice, The Hanged Man, Death, Temperance, The Devil, The Tower, The Star, The Moon, The Sun, Judgment, and The World. 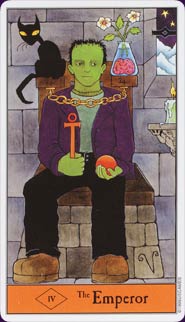 West retains all the standard names of the cards with the exception of altering the titles of the suits. Wands/Staves are turned into fiery and playful Imps; Cups are now Ghosts, designed after a popular 1920s candy container; Swords are changed to Bats; and Coins become the universal symbol of the holiday, Pumpkins.

There are so many wonderful cards that evoke feelings of nostalgia, Gothic shivers, and the beauties of the season in me that it’s hard for me to narrow down favorites. (And, unfortunately, I couldn’t locate online images of a few of those favorites, so you’ll have to take these as samples that I could locate.) Among the numbered cards, I’m especially drawn to the suit of Pumpkins. The Seven of Pumpkins shows a wealthy woman in luxurious 1920s evening attire with an owl perching on her hand and a old mansion on the hill behind her—it’s alluringly fashionable, and promises the opening of a stylish midnight party. The Six of Pumpkins has a woman in a witch outfit dispensing candy to children in costumes at her door, which I think portrays the idea of “charity” and the balance of “have/have not” in a way far less literal and much more pleasing than what appears on Waite-Smith decks (a man holding scales handing out alms to beggars).

But the trump cards, as in most decks, get the most artistic attention, since they are the most archetypal figures—their names carry enormous baggage on their own even before an artist gets to the canvas. West’s interpretations here are stunning, and each card is worth staring at for a few minutes, with a whole children’s book seeming to lurk behind it, begging to be written. 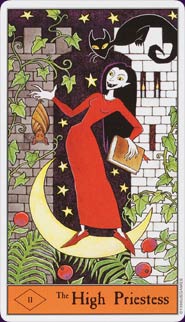 The standouts in the trumps: The High Priestess, starring a svelte vampire lady atop a crescent moon between white and black castle turrets. The Hierophant, which changes the papal figure of most decks for a wrapped-up Egyptian mummy, with two cats playing with his unwinding tomb-bandages. The Lovers, which throws out most of the Waite-Smith iconography of a man and a woman standing beneath an angel and instead has the ultra-Romantic image of a woman in bed awaiting a visit from her Bela Lugosi-style vampire lover. The Wheel of Fortune, where some hapless fellow has gotten himself strapped to a spinning circus-wheel with knives sticking out of it. Death, which reverses the grim aspect of the card for a charming skeleton who is bringing new life to a garden of pumpkins. The Devil, which puts its female red character in, yes, a blue dress. The Tower, perhaps the most immediately striking card in the whole deck, brings a lightning bolt down on a classic haunted house, setting the black cat’s hair on edge. And finally, The World, where our main character the black cat dances a jig in the branches of Yggdrasil. (Look very closely at the trunk, and you’ll see the following graffiti: “Nidhogg was here.” Kipling West must be one cool woman.)

Although the deck comes with a small white booklet folded inside the box (something all decks from U. S. Game Systems have), Karin Lee’s 137-page book The Halloween Tarot is an important accessory, and anybody who wants to purchase the deck should also get hold of the book; they are often sold in a set together. 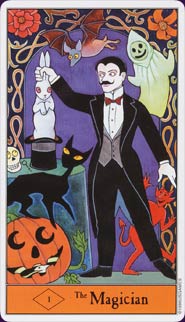 Karin Lee’s book contains the requisite information about the card meanings if people want to use them for fortune-telling games (and, unfortunately, Lee repeats a number of the myths about the cards’ origins). But the book is most interesting for the chapter on the history of Halloween and its traditions, and its analysis of the images choices that Kipling West made for the cards. For example, Lee explains the use of the Bride of Frankenstein[’s Monster] on the card The Empress:

Admittedly, the Bride of Frankenstein may not be the usual “earth mother” associated with the Empress card, especially since she’s technically dead. Still, patched together as the ideal woman for her monstrous groom, she is a fine example of the ability to revive, resurrect, and reconstruction.

. . . as well as shriek and hiss and make the Monster blow the castle to smithereens. (Which, now that I think of it, is perfect copy of the classic image of The Tower . . . wow, tapping into more archetypes here than I thought.) Perhaps Lee’s explanation isn’t completely stable, but the Bride looks great on the card, caressing the car on her divan, and it means we get Frankenstein’s Monster as The Emperor (“the idea of domination, and of course, in its reverse, domination backfiring”).

The Halloween Tarot deck is still available at most on-line booksellers, although I’ve noticed that the set that comes with the book is a bit harder to come by. For Halloween lovers, I think this is an essential gizmo to have during the most wonderful month of the year. 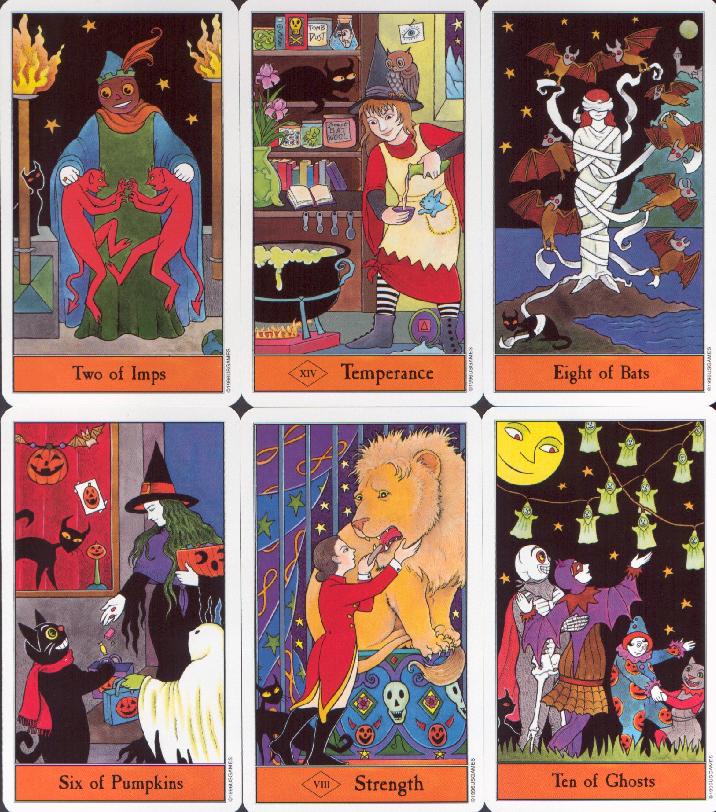 Those are some remarkable illustrations. Thanks for sharing Ryan. I’m particularly fond of the Three of Ghosts, toasting to Halloween night.