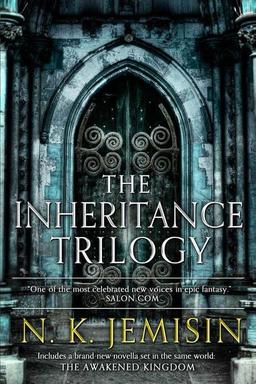 It’s tough to come up with a title for a new fantasy trilogy these days. Titles are like web domains — all the good ones are taken, and most of the not-so-good ones, too. As Scott Adams had noted, if you want a completely original title (or web domain) nowadays, you’re stuck with a shrinking number of phrases that resemble monkey sounds.

Take “The Inheritance Trilogy.” The title has already been used a few times — mostly famously for the first three novels of Christopher Paolini’s best selling fantasy series, which began with Eragon. It’s also the name of an Ian Douglas military SF trilogy beginning with Star Strike, published from 2008-2009, as another example.

Well, we all know that good things come in threes. So I wasn’t all that surprised to see the omnibus volume of N.K. Jemisin’s first fantasy series published under the name The Inheritance Trilogy last month. If you can’t be original, go for something popular.

Titles aside, the omnibus volume of The Inheritance Trilogy is definitely a book you want on your shelf. Modern fantasy is a vibrant and exciting field, and talented new writers are emerging all the time, but precious few of them hold a candle to Jemisin. She is one of the most gifted fantasy writers I have come across in a very long time, and this new one-volume edition contains the complete text of her first three novels, in a single affordable (and massive) package.

The Inheritance Trilogy omnibus includes the novels The Hundred Thousand Kingdoms, The Broken Kingdoms, and The Kingdom of Gods. As a special bonus, it also includes a brand new novella set in the same world, The Awakened Kingdom, which appears here for the first time.

Here are the paperback editions of all three novels (click for bigger images).

The omnibus edition is a true doorstopper, nearly 1,500 pages — longer than any of my paperback editions of The Lord of the Rings, and even longer than The Great Book of Amber, the one-volume edition of Roger Zelazny’s 10-volume Amber Chronicles, and the book I was pretty sure was destined to be the biggest paperback I’d ever own. I won’t make the same prediction this time, as I’m sure to be proven wrong once again.

But trust me… this is a big book.

A REALM OF GODS AND MORTALS

Yeine Darr is an outcast from the barbarian north. But when her mother dies under mysterious circumstances, she is summoned to the majestic city of Sky. There, to her shock, Yeine is named an heiress to the king. But the throne of the Hundred Thousand Kingdoms is not easily won, and Yeine is thrust into a vicious power struggle.

I read the trilogy back in September (over the course of about two days while sitting on a train heading north through Canada) and really enjoyed them.

One thing I very much appreciate: The novella is being made available as a standalone for those of us who already have the original three books. I get rubbed the wrong way sometimes when a publisher releases an omnibus edition with new content that’s not available elsewhere.

A two-day train ride in Canada? Where were you headed?

And yeah — it’s good of the publishers to make the novella available separately, for those of us who already have the individual books.

We took the train from Winnipeg to Churchill, MB, which is way up on Hudson Bay. Two nights on the train each way, plus a couple days in the town, which is quite small but had a really excellent diner. We only saw one unconscious polar bear, sadly. (It had gotten too close to town and been tranqued.) Also, no Northern Lights but we did see beluga whales offshore.

And I took the opportunity to read … let’s see … Jemisin’s Inheritance Trilogy, Sam Sykes’ Aeons’ Gate trilogy, Frans Bengtsson’s The Long Ships and the most recent James S.A. Corey Expanse novel. Plus maybe one or two others. It was a good trip.

Wow! That’s a lot of great reading. (And a pretty exotic destination!)

On my last vacation (a Mediterranean cruise with my kids), I managed to read some Jack Vance novellas, but that was about it. But I did get to swim with stingrays and dolphins, so I’m not complaining. 🙂

I can think of few better places to read Jack Vance novellas than on a cruise ship on the Mediterranean.

Then again, I can think of few better places to do almost anything than on a cruise ship on the Mediterranean … 😀

I remember sitting alone, on the upper deck of a Carribean cruise ship, on a beautiful, sunny day, stretched out reading Terry Pratchett’s Men at Arms. THAT was a fine experience.