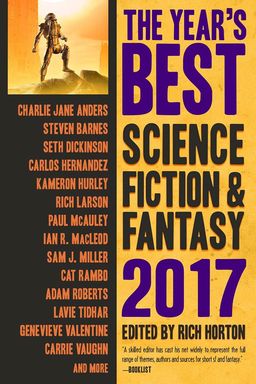 Yesterday Prime Book publisher Sean Wallace announced the Table of Contents for the ninth (ninth!) volume of Rich Horton’s Year’s Best Science Fiction and Fantasy, one of the very best of the Year’s Best volumes. Rich said this about it:

I am excited as I am every year to be able to publicly share the contents of my Best of the Year anthology. Thrilled to share the riches of our field — honored that so many wonderful writers allow me to publish their stories.

The book will be available next summer from Prime Books. And without further ado, here’s the compete TOC, sorted alphabetically by original venue.

“The Bridge of Dreams” by Gregory Feeley, Clarkesworld
“Everyone from Themis Sends Letters Home” by Genevieve Valentine, Clarkesworld
“Things with Beards” by Sam J. Miller, Clarkesworld
“Innumerable Glimmering Lights” by Rich Larson, Clockwork Phoenix 5
“Between Nine and Eleven” by Adam Roberts, Crises and Conflicts
“Red of Tooth and Cog” by Cat Rambo, F&SF
“The Vanishing Kind” by Lavie Tidhar, F&SF
“A Fine Balance” by Charlotte Ashley, F&SF
“Empty Planets” by Rahul Kanakia, Interzone
“Fifty Shades of Grays” by Steven Barnes, Lightspeed
“I’ve Come to Marry the Princess” by Helena Bell, Lightspeed
“RedKing” by Craig deLancey, Lightspeed
“A Non-Hero’s Guide to The Road of Monsters” by A.T. Greenblatt, Mothershipship Zeta
“Dress Rehearsal” by Adrian Tchaikovsky, Now We Are Ten
“The Plague Givers” by Kameron Hurley, Patreon
“Gorse Daughter, Sparrow Son” by Alena Indigo Anne Sullivan, Strange Horizons
“The Magical Properties of Unicorn Ivory” by Carlos Hernandez, The Assimilated Cuban’s Guide to Quantum Santeria
“Something Happened Here, But We’re Not Quite Sure What It Was” by Paul McAuley, Tor.com
“That Game We Played During the War” by Carrie Vaughn, Tor.com 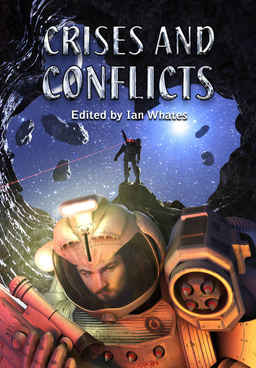 As usual, Rich casts his net far and wide (The Beloit Fiction Journal? And what the heck is Mothershipship Zeta?) to find the best new fiction of the year. As you’d expect though, the top industry markets dominate the list. I make the story count as follows:

Good to see Analog make the list, as well as two small press anthologies edited by Ian Whates, Crises and Conflicts and Now We Are Ten, both from NewCon Press. Special shout-out to our bud Carlos Hernandez, for the inclusion of an original story from his first collection, The Assimilated Cuban’s Guide to Quantum Santeria.

Our coverage of previous volumes in this series includes:

The Year’s Best Science Fiction and Fantasy: 2017 will be published in trade paperback and digital formats by Prime Books next summer.

[…] the full Table of Contents, check out Black Gate. The book should be published in June 2017 and available in bookstores everywhere. You can even […]

perhaps a silly question but what about great stories published in December? Asimov has several contenders

Year’s Best editors usually are given review copies of all major magazines and anthologies far in advance of anything coming out in December.

In Which I Am Eligible for the Campbell Award « Once & Future

[…] Then, in November, the publication of “A Fine Balance” marked my 3rd appearance in F&SF. Soon after, I placed the story in Rich Horton’s forthcoming Year’s Best Science Fiction and Fantasy, 2017. […]