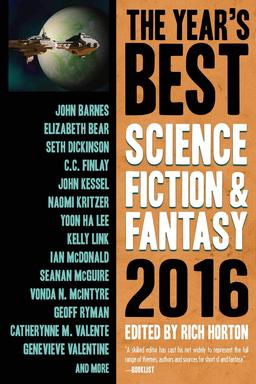 We are well and truly into the Year’s Best season now, that delightful part of the year when the annual best-of-the-year anthologies start flying thick and fast. This year this season kicked off with Jonathan Strahan’s Best Science Fiction and Fantasy of the Year: Volume Ten, and next week Neil Clarke’s The Best Science Fiction of the Year, Volume 1 follows close on its heels. And that’s just the beginning — over the next two months we’ll see Year’s Best books from Gardner Dozois, Paula Guran (two!), Ellen Datlow, Karen Joy Fowler and John Joseph Adams, and many others. If you’re a short story lover like me, it’s a veritable embarrassment of riches.

If you can only afford to buy one, for my money Rich Horton’s The Year’s Best Science Fiction & Fantasy 2016 is the one to get. Rich’s taste is exemplary, and he ranges far and wide to hunt down the very best short fiction of the year. The eighth volume goes on sale next week, and includes C. S. E. Cooney’s novella The Two Paupers and Naomi Kritzer’s Hugo and Nebula nominee “Cat Pictures, Please,” plus several other Nebula nominees — including Tamsyn Muir’s novelette “The Deepwater Bride,” Brooke Bolander’s “And You Shall Know Her by the Trail of Dead,” and “Today I Am Paul” by Martin L. Shoemaker — and 25 more stories.

I do find that, year after year, Rich’s taste tends to align best with mine. But with several newcomers on the scene, I’m curious to see if Rich remains at the top of the heap. Giving him particular competition last year were the Strahan and Paula Guran volumes, especially The Year’s Best Science Fiction & Fantasy Novellas (and this year’s looks especially good).

Since you’ve seen the contents lists, can you say how much duplication there is between the collections? I’m always afraid, if I buy just one, of what I’ll miss, but if I buy more, that I’ll be buying many stories twice or more.

R. K. Robinson, e-mail me at pfnel64@gmail.com, and I’ll send you a spreadsheet showing you exactly what the contents of the various books are, and what is duplicated. – Piet Nel.

I felt the same way at first, but I was startled to fid just how little duplication there was between the volumes. Rich Horton selects two stories from Meeting Infinity, for example, and Neil Clarke picked four… but there’s no duplication at all between the stories!

I bought both anthologies, and I’m glad I did. I’ll buy the Guran and the Dozois as well… the Dozois is huge, and the annual summary is practically worth the price all on its own.

You might be surprised but year’s best anthologists do tend to talk to each other about their choices, beforehand, and sometimes when stories have overlapped extensively it represents consensus of sorts. And the fact of the matter is that there are certainly a lot of quality pieces out there, so I would bet that if we had all our choices we would include a lot more! :p