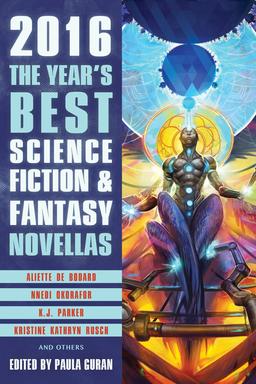 My favorite book last year was The Year’s Best Science Fiction & Fantasy Novellas 2015, edited by Paula Guran. Packed full of the best and most ambitious short SF and fantasy of the year, it was also a terrific bargain, collecting novellas by Patrick Rothfuss, Nancy Kress, Genevieve Valentine, K. J. Parker, James S. A. Corey, and others — including several that had been previously published only in expensive limited edition formats.

Prime and Paula Guran have announced the line-up for this year’s volume, and it looks even better, with widely acclaimed tales by Usman Malik, C.S.E. Cooney, Aliette de Bodard, Nnedi Okorafor, K. J. Parker, and many others — including two standalone Tor.com releases, Binti and The Last Witness, that would cost you more than the price of this book alone. Here’s the complete list:

Here’s some of the contents:

Paula Guran has been plenty busy recently. Some of her recent anthologies we’ve covered include: