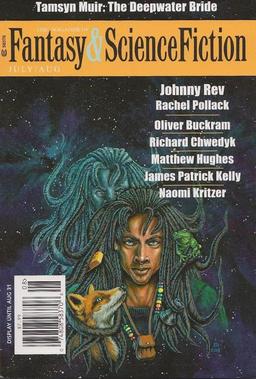 New editor C. C. Finlay seems to be settling in nicely. His first effort as editor, the July-August 2014 issue of F&SF, produced a Nebula Award, for Alaya Dawn Johnson’s “A Guide to the Fruits of Hawai’i.” It’s too early to see if his second, the May-June issue, will fare as well, but it did includes good stories from David Gerrold, Albert E. Cowdrey, Sarah Pinsker, Amy Sterling Casil, and others, so things look promising.

And so on to the third issue, with stories by Rachel Pollack, Richard Chwedyk, James Patrick Kelly, Naomi Kritzer, an Archonate story featuring Cascor the discriminator by Matthew Hughes, and others. Martha Burns reviews the fiction at Tangent Online, saying “The Deepwater Bride” by Tamsyn Muir “gives us some of what P.G. Wodehouse gave us with Bertie Wooster’s zippy argot… brilliant.”

We last covered F&SF here with the May/June 2015 issue.

See our late June Fantasy Magazine Rack here, and all of our recent Magazine coverage here.