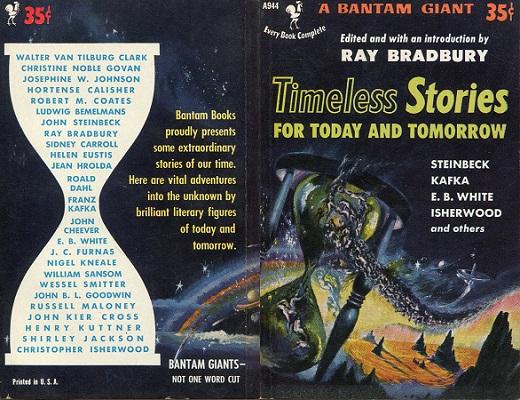 Ray Bradbury is known primarily as a writer, and as one of the most gifted fantasists of the 20th Century. But in his 70+-year career, he also edited a handful of anthologies. The first of these, Timeless Stories for Today and Tomorrow, originally published as a Bantam Giant paperback original in 1952, was also the most popular, with multiple reprintings and editions over the next two decades.

Timeless Stories for Today and Tomorrow was published in 1952 with a wraparound cover (above, cover artist uncredited). It was reprinted several times, starting in 1961, with a new cover (also uncredited, below left).

Bantam Books reprinted the book two more times, in 1967 (above middle) and 1970 (right). The 1970 edition reuses the 1967 artwork (part of it, anyway), with the new standardized design Bantam introduced for Bradbury’s entire back catalog, featuring an image of the author.

Bantam wasn’t particularly good at crediting their cover artists — none of the artists for these editions are currently known.

The last edition was in August 1977; the book has now been out of print for almost 40 years. There is no digital edition. Copies are available online for around the price of a new paperback.

Timeless Stories for Today and Tomorrow was originally published by Bantam Books in September 1952. It is 306 pages, priced at 35 cents. The cover artist is uncredited.

Sharp eyes you have! And you’re very right. Thanks for the link!