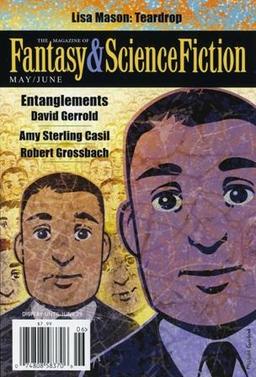 Yesterday, during the Nebula Awards banquet here in Chicago, I had the opportunity to talk with Gordon van Gelder, long-time publisher and editor of The Magazine of Fantasy & Science Fiction, and get his take on how well the transition to new editor C. C. Finlay has been proceeding. It was great to hear that he sees the same things I do — that F&SF has a new level of energy, and that the transition has generated some long overdue attention and interest for the magazine.

Charles Finlay’s second issue as editor is a strong one. The powerful stories by Grossbach, Gerrold and Sarafin are alone worth the price of entry.

Robert Grossbach’s “Entrepreneurs” is the longest and best story in this issue. Stretching from 1952 into the near future, it tells of the efforts of enterprising engineer Morty Rushman to make it big in business ─ with the help of some equally enterprising aliens from the Eep planet, Narusto. Grossbach uses the theme of alien contact to make some very amusing points about modern American capitalism in the second half of the twentieth century and beyond. The humour reminded me of Kurt Vonnegut and Robert Sheckley, and there can’t be much higher praise than that.

Departments this issue include book reviews by Charles de Lint and Elizabeth Hand, film reviews from David J. Skal, the results of Competition #89 (a Limerick Challenge), cartoons by Frank Cotham, Arthur Masear, Mark Heath, and a Curiosities column by David Langford. The cover is by Michael Garland, illustrating “Entanglements.”

We last covered F&SF here with the March/April 2015 issue.

When I received my dead-tree issue in the mail, I was glad to see that C.C. is keeping up the Albert E. Cowdrey love. (I know I’ve seen some complaints online about how prevalent he is in the mag.)

I thought the same thing when I saw his name. Of course, we can’t know for sure how much of this issue was Charles, and how much was inventory from Gordon.

Yeah, I thought of that as a possibility too, but decided to “speak no evil.” 😉