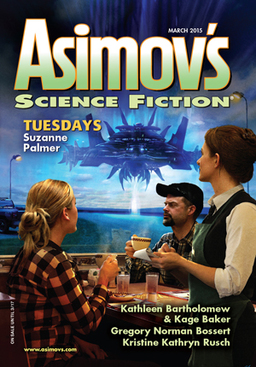 For today’s column I’m covering for our regular Tuesday short fiction reviewer, Fletcher Vredenburgh, who’s goofing off this week. Which is a nice excuse for me to blow off other stuff I’m supposed to be doing, and settle back in my big green chair with the latest issues of my favorite magazines.

I started with the March issue of Asimov’s Science Fiction (which used to be called Isaac Asimov’s Science Fiction Magazine, back when the pace of life was slower and people had time to read a title that long.) Partly because it’s been far too long since I’ve read an issue, but mostly because I love Paul Youll’s delightful cover, with a strangely sinister UFO hovering outside a diner. I opened the magazine hoping that it’s illustrating the featured story, Suzanne Palmer’s “Tuesdays,” because I think I’d enjoy a good UFO story, and also because I want to know what that mischievous-looking blonde on the cover is up to.

The Table of Contents lists “Tuesdays” as starting on page 13. I flip to page 13. It’s an ad for a crossword magazine. I chuckle a little. Getting the Table of Contents 100% right was always the biggest pain with the print edition of Black Gate, too. I usually did it last, because last-minute changes were constantly messing with story placement.

I flip to page 14. Page 14 opens in mid-sentence. I glance back at page 12. It’s the last page of James Patrick Kelly’s On the Net column. I flip back and forth for a minute, confused, before the truth finally dawns: the first page of “Tuesdays,” the cover story for the issue, is missing.

Now, I haven’t been an editor of a print magazine for almost four years. But that doesn’t dull the sympathetic horror that crawls up my spine. This is every editor’s nightmare (and probably every writer’s horror — but let’s be truthful, writers are terrified of everything). No one understands just how easy it is to make a mistake like this.

Let me share a personal example. When I was proofing the bluelines for the Winter 2002 issue of Black Gate, I happened to notice — at the last moment, and by barest luck — that a late font correction in Michael R. Gist’s story “Tav-Ru’s Troth” had nudged one word at the end of a sentence to the next line. That had inserted an unexpected line break, which in turn had pushed the entire last paragraph off the page… and into oblivion.

The last paragraph of “Tav-Ru’s Troth” contained a twist that changed the whole nature of the story. And we were going to press in about eight hours, with that paragraph missing.

Well, a panicked phone call to the printer (and a brief period of hysterical sobbing, and then some milk and cookies Alice made for me) sorted all that out. But you better believe that I proofed every issue of Black Gate after that with extra care. Over the next few years we prevented last minute errors of all kinds — printer mistakes that left pages blank, pagination errors, and that one time the printer inserted page 341 backwards — from making it into the print edition of the magazine.

This stuff happens, and if you’re lucky you’ll catch most of it. But you can’t be lucky forever.

Still, that didn’t help me with my Tuesday morning short fiction column. Black Gate was laid out in the age of hand-set type and papyrus paper, but this was the age of the Internet. I went online and did a search for “Tuesdays,” by Suzanne Palmer — and sure enough, I found her Facebook page and a link to an online version of the story, complete with the first page. Once again, I settled back to read it.

It turned out to be well worth the trouble. It’s an excellent tale, the story of two police officers who show up late one night at a diner to investigate a report of a UFO, and the strange (and conflicting) reports they get from witnesses. Turns out there’s more going on at this sleepy diner than just a possible visitation from an advanced alien civilization.

The story has an unusual structure. It’s told in brief — very brief, 3-4 paragraph — chapters, each from a different viewpoint, and each with a different time stamp. The chapters jump back and forth in time, and the whole thing is initially a little confusing.

It takes some getting used to, and some effort on the part of the reader. But the payoff is worth it, as the interwoven narratives each achieve their own separate momentum, building towards a final reveal in the last chapter. There are multiple small surprises along the way as Palmer gradually constructs a vivid and very convincing picture of the unseen goings-on at a lonely highway restaurant, each of which prevents the participants from telling the whole truth about a monumental human event.

It’s not the construction that’s the true star of the story, though. That accolade belongs to Palmer’s smooth prose, which is marvelous. She has a real gift for description, turning even mundane events into something noteworthy. Here’s part of the second paragraph, as the patrol car pulls up to the diner:

Even before it rolls to a gravel-crunching stop just at the edge of the bright neon light, the ambivalence of the two officers within is apparent. No flashing lights or sirens, no leaping out with guns drawn to confront the confrontable. Nor are they responding to a done-deal tragedy, another faceless out-of-stater whose attention has been slowly worn down by the monotony of the night road until their car unexpectedly intersects with one of the road’s few, but surprisingly hittable, utility poles.

Well, that’s done. I read and reviewed one story, and I’m exhausted. How does Fletcher do it? His January Short Story Roundup last week covered eight, and in detail. Believe me, I think we’ll all be happier when he’s back next week.

In the meantime, you can benefit from the little mix-up this month at Asimov’s. The magazine has placed the complete text of “Tuesdays” online here. Enjoy it — and if you like it, consider subscribing. It’s a great magazine and — like most short fiction magazines today — could really use your support.

Asimov’s Science Fiction is edited by Sheila Williams and published by Dell Magazines. The cover price is $4.99 for 116 pages; a one-year subscription is $34.97 (US) or $49.97 (International). It is also available in a variety of digital formats. The cover this issue is by Paul Youll, for “Tuesdays.” Check out the complete TOC, story excerpts, and additional free content at the website.

We last covered Asimov’s SF here with the December 2012 issue.

I had wondered if every copy of the magazine had that problem!

(I had an emailed version of the story so was able to read it anyway.)

What did you think of the story?