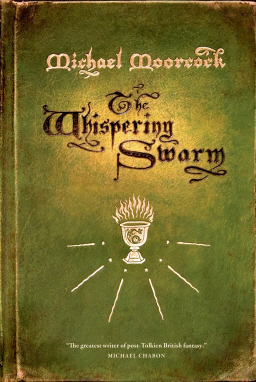 Michael Moorcock is a giant. He is probably most famous for his Elric of Melniboné stories, but he also has written many other fine works. In addition, he is also well known for having been the editor of the controversial British science fiction magazine New Worlds from 1964 to 1971. From this position Moorcock is usually credited with fostering the development of the New Wave in science fiction and fantasy.

Personally, I have been a big Moorcock fan for years and was something of a rabid devotee in junior high. I read the Elric stories over and over, almost memorized the “Melnibonéan Mythos” section of the Dungeons and Dragons Deities and Demigods book, and even bought the old Chaosium RPG Stormbringer, which was based on Moorcock’s Elric tales.

So I was incredibly excited when I heard that Moorcock was releasing a new novel, The Whispering Swarm, the first in a new trilogy. Having just finished it, I have to say that it is one of the most unique books I have ever read. Described in a sentence: It’s part fantasy and it purports be part autobiographical.

I think a little light can be shed on the book’s conception with the following.

StarShipSofa, the excellent British science fiction podcast and website, interviewed Moorcock back in 2008 (if you’re interested, you can watch it here). At one point in the interview, Moorcock relates that his publisher thought he should write a memoir. But Moorcock admits that he is very reticent to do so because many of the people he would be writing about are still alive, and he didn’t want to hurt anyone’s feelings — nor did he want to get into any “he said vs. she said” controversies.

But he goes on: “I’m saying this now, and it could change tomorrow, but I don’t think I really want to write an autobiography as such.” In 2015 The Whispering Swarm now appears, which seems to be the closest we’re going to get to a Moorcock autobiography, “as such.”

Throughout The Whispering Swarm the narrative switches back and forth between two threads. One focuses upon young Michael Moorcock, an aspiring British pulp writer whose gifts result in him editing his own magazine in his teens, and socializing with some of the most artistic and hip London circles around in the 1950s and 60s.

This thread reads like a documentary about a 1960s psychedelic band — you can almost hear Austin Power’s “yeah baby!” in the background. It drips with coolness and makes you wish you had been alive in those days, partying and experimenting in those very same circles. In short, from an American perspective, it’s something of a baby boomer nostalgia fest of the British pop invasion. I especially enjoyed the little historical tidbits that were revealed in Moorcock’s relating of various SF&F writers.

Where is the fantasy though? This is where the second narrative thread comes in.

Young Moorcock eventually befriends a monk who leads him to a part of London that he has never seen, before called Alsacia (aka the Sanctuary). At first it’s not clear if this is just a little enclave of bohemians and wannabe medievalists, or perhaps an experience that is shaped by Moorcock’s use of recreational drugs.

However, return visits seem to make clear that Alsacia is both “real” and fantastic in that it seems to have people from different times, and even from fictional stories. Here Moorcock becomes a swashbuckling rogue, falling in love with a lusty beauty named Midnight Molly, and going on various adventures with King Charles I’s relative Prince Rupert and even the Three Musketeers. It’s a strange mixture of fantasy and historical fiction.

One of the interesting things experienced throughout the book was just as you got caught up in one thread, Moorcock often shifted to the other. So at points I found myself so interested in the details of his early life and career I sometimes hated when he decided to head to Alsacia. But, there were times when I found myself so engrossed with the mysteries and adventures being experienced by Master Moorcock in Alsacia, I would get a bit frustrated when he would return to his wife and kids in the “real” London.

Given this constant narrative switching, this novel may sound like an unsatisfying read. Indeed, I’ve seen at least one review that claims The Whispering Swarm is neither a satisfying biography nor a fully satisfying fantasy. I see the reviewer’s point, but I thought it was a fairly ingenious way for Moorcock to present biographical material while still attempting to avoid the worries that he cited in the earlier interview.

At worst, some of Moorcock’s jumps from self-justifications to smugness over his career and cultural status evince an almost narcissistic mirror gazing. However, though some of his actions and perspectives may be hard to excuse or even forgive, I think this should be expected from any autobiographical material. Such recriminations and mollifications should be expected when reading a person’s attempt at being transparent about their emotions and past actions. Not excusable, but understandable.

Personally, the thing I found most frustrating about the book was Moorcock’s all-too-brief recounting of how he came up with his Elric stories. You get the sense that he didn’t give too much thought to them, and that in his eyes they were not much more than just potboilers, written quickly just so he could pay the rent. Surely there’s much more to one of the most enduring characters in fantasy than just this!

I highly enjoyed The Whispering Swarm and I look forward to the rest of the trilogy. But I have to admit that I’m much more interested in seeing the autobiography thread play out, rather than the fantasy thread. We’ll just have to see where Moorcock goes next!

The Whispering Swarm was published by Tor in January 2015. It is currently only available in hardback and comes in at 480 pages, priced at $26.99.

I saw this one on Amazon recently and was wondering about it. Ah well, another book to buy.