Here we are again with a new batch of short stories for your reading pleasure. Some were good, some were alright, you know, the usual. Remember, though, whatever I write about these stories, take the time to go check them out yourself and let the writers and magazines know what you think.

Swords and Sorcery Magazine Issue 36 marks three years of continuous publication and is one of its best in a while. The first tale, “The Fourth River” by Brandon Ketchum, is a good old bit of monster-fighting set in the forests of a magical land called Ohio, in a seventeenth century filled with fantastical beasts. The story tells of the violent encounter between a party of colonial traders and a bunch of Shawnee with a Kinepikwa — a giant serpent with antlers and the power to paralyze any unlucky enough to view the evil gem embedded on its brow.

“The Fourth River” is good example of the continuing movement by some writers away from the too, too common medieval trappings of much fantasy. There’s not much to the characters — they’re too busy struggling to save the Ohio Territories from destruction — but Ketchum does a good job limning out his alternate reality in six thousand words.

Issue #36’s second story is “Warden’s Legacy” by Daniel Moley. It’s only his second published story, but it feel like it’s part of a much longer tale. Dane is a talented soldier hoping to join up with an elite unit, the Phantoms. They are the frontline in a war against a force of wizards bent on resurrecting the Forshai, a race of reptilian beings who once ruled mankind. Not a bad story at all, with enough tantalizing refrences to a larger world to make me want to read more.

The opening story in Heroic Fantasy Quarterly #23 is “Crazy Snake and the Ciguanaba,” another one of Eric Atkisson’s tales of a Comanche adventurer working his way south through Central America. The ciguanaba is a legendary being that, from behind, appears to be a beautiful woman, only to drive men mad when she reveals her monstrous visage.

Crazy Snake has to contend not only with supernatural foes, but more mundane ones as well. He’s arrived in Nicaragua in 1857 during the rule of the American filibuster William Walker. After a run-in with the ciguanaba, he finds himself imprisoned by allies of Walker and added to a boatload of slaves being shipped downriver. Fortunately for Crazy Snake, the slavers decide to take along his horse, Aahtaqui, a creature at least as smart as Trigger. This one’s a lot of fun and I’m looking forward to more from Atkisson.

The second tale is by P. Djéli Clark. I became aware of Clark through his blog, The Musings of a Disgruntled Haradrim, before I read his stories in the two Griots anthologies. “With a Golden Risha” features a troubador named Saleh, a band of pirates with a revolutionary captain (“He’s not a captain,” Qooleey cut in. “No captains on this ship.”), and and a deadly airship called The Beggar.

The sky above the Jade Sea was a shipping way for cargo vessels and barges. This ship was neither of those. Black and sleek, it cut through the empty sky like a steel shark, its engines and propellers unnaturally silent. The flag it flew was plain enough: white with crimson calligraphy worked into a serpent with clawed feet. Not the standard of any kingdom or federation, not even a merchant’s guild. That was the flag of a pirate.

Saleh’s no swordsman or sorceror, but an artist. He avoids getting stuck working in the engine room not by feats of arms, but by coaxing from the crewmen what songs from their homelands they want to hear and then playing them skillfully. It’s a change of pace I found quite enjoyable.

The final story in HFQ is by editor Adrian Simmons. “Bronze-Ard, The Ferret Master, And Auspicious Events at Swift Creek Farm” tells of what happens when a weasel is gifted with a little too much intelligence by a small river goddess. All the weasel, known as Ate-Tadpoles, wants is the skill to get past some dogs to a female ferret in heat.

He was in a woodpile. Near the man-burrow. The smell of sweet-season brought him back to his plan.

He ran up to the house itself. He’d never been this close. The men were making noises, lots of noises, like a stream over rocks but with their mouths. And the smell of weasels and fire was strong.

He slipped along the base of the house, sniffing for a way in. Rats found it, he could find it-

Freeze! Something moving around the curve of the wall ahead! Rooster!

The bird puffed up and lashed out its wings. Terrifying! Bite neck! Bite neck!

The was-wolf let out a deep bark.

Gonna die! Was-Wolf’ll get me! Run!

Unable to sneak around the dogs despite his gift, he comes back to seek another favor from the goddess. Each time he brings her a gift in order to gain her favor, and each time she makes him a little cleverer. Along with the too-smart-by-half weasel, there’s a starkly terrifying dragon and a brave farm girl. Together they make this one of the most memorable stories I’ve read in the last few months.

A pair of poems close out HFQ #23. In “Witch and Paladin” by Reilly S. Blackwell, a witch tries to lure a paladin to her side. In “The Dancer” by Susan Carlson, a warrior tells of the dancer he rescued from slavery and their exploits together in the years that followed. Now, blind, he tells of the revenge he will take on those who killed her.

Beneath Ceaseless Skies #164 doesn’t have any S&S in it, but #165 has a pair of good stories. The first is Therese Arkenberg’s “For Lost Time,” the sequel to her story “The Storms in Arisbat.” In order to rescue a city lost in time, the wizard Aniver and his companion, Semira, travel to the city of Nurathaipolis-in-Exile. There they hope to secure the help of another wizard in order to travel to the border of the realm of death in order to learn whether or not their larger plan is possible. It’s all a little complicated and you’d be better served if you read the previous story (something I didn’t do), but there’s a nice tone and feel to it. I’ll definitely be going back to the earlier story and then rereading this one.

The final story in BCS #165, and for this edition of the roundup, is “Day of the Dragonfly” by Raphael Ordoñez, one of my favorite discoveries in the past year or so. Ordoñez consistently creates strange tales that bring to mind Clark Ashton Smith as well as Edgar Rice Burroughs without ever crossing into mere pastiche. That said, this tale of the sword-for-hire Keftu, known by the work name Dragonfly, is more of a straight-ahead adventure than the other stories of his I’ve read. 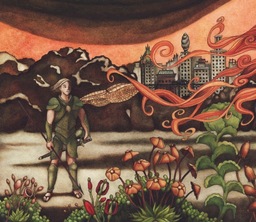 The Dragonfly is hired by the second, less beautiful, daughter of the ruler of a small, impoverished kingdom to kill a dragon. The monster has been ravaging their land and only the sacrifice of the lord’s first, more beautiful, daughter will bring the depredations to an end. You’ll find echoes of the story of Andromeda and Perseus in this tale, as well as a gang of misinformed cultists, a winged guardian, and ruined cities and canals.

Like the other stories by Ordoñez I’ve reviewed, “Day of the Dragonfly” is set in his created world of Antellus. It’s a heady mix of old and new technology, prehistoric beasts and mythical creatures. We don’t learn a lot about the Dragonfly in this story, except that he’s brave and honorable. On his blog, however, Ordoñez does say that he is the protagonist of his yet-to-be-published novel Dragonfly. I hope the book appears sooner rather than later.

So there you have it, kids. Lots of good stories with which to while away the cold winter hours. So go, give them a read and let me know what you think.

Sounds like a great line-up this month, Fletcher. Thanks for being a scout for excellent fiction!

It’s a lot of fun to see folks keeping the flame of short heroic fiction alive. Thanks for the forum to promote it.

Thanks for the review! One look at Clark and Atkisson’s works and we knew we had to get them. “The Dancer” is probably one of my favorite poems we have ever posted.

@Adrian – I always give too little attention to the poems. “The Dancer” has more bite than many of the stories I read each year.

[…] one story, and I’m exhausted. How does Fletcher do it? His January Short Story Roundup last week covered eight, and in detail. Believe me, I think we’ll all be happier when he’s back […]