I memorized all of John Carter and Tarzan, and sat on my grandparents’ front lawn repeating the stories to anyone who would sit and listen. I would go out to that lawn on summer nights and reach up to the red light of Mars and say, “Take me home!” I yearned to fly away and land there in the strange dusts that blew over dead-sea bottoms toward the ancient cities. — Ray Bradbury (“Take Me Home,” The New Yorker June 4, 2012)

A couple weeks ago, friend and fellow Black Gate blogger Gabe Dybing texted me with a proposition. “Read chapter one of Maker of Universes,” he typed, “and if you’re interested let’s talk about doing a survey of the series together.”

World of Tiers is probably Philip José Farmer’s most renowned series next to Riverworld, which I read a few years back. Currently I’m reading the Dungeon books, a shared-author series of six novels set in another world created by Farmer. Did I want to add this to my plate? Gabe piqued my interest by noting that the protagonist is an older English professor, somewhat disillusioned, who wants to escape — a character with whom we would feel some personal sympathies.

And so I read the first chapter, and the survey is on. In coming weeks we will be reviewing the books together — interspersed, I’m sure, with Gabe’s own Wednesday survey of the fantasy works of Poul Anderson and my own eclectic ranging far and wide across the spec-fic landscape.

But before we begin that undertaking, here is a prologue of sorts, a few thoughts I jotted down after reading the first chapter of Maker of Universes (1965). My thoughts, you will see, apply broadly to all “escapist” fiction…

Escapism. Let’s discuss this notion of escapist fiction for a minute, shall we?

Here we have a book that convincingly opens by introducing us to an elderly couple who are about to purchase a retirement home in Arizona. The protagonist is an English professor whose marriage has long since grown sour, and he wonders why he has stayed with her all these years — “the thought of parting seemed more painful than staying.” 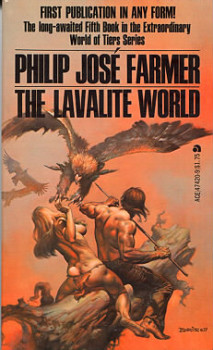 A “literary” novelist would take that setup and proceed to explore their unsatisfied dreams and gnawing regrets, perhaps revealing in flashback when the fruit of their union first began to spoil, when events drove them further into postures of resignation to their lot, when pivotal moments, barely noted at the time, shut down alternatives one by one and, finally, herded them into this final narrow stretch of a life unfulfilled. The modernist-realist would wring psychological insights from the small, telling details of their day-to-day existence, deftly manipulating them into delicate ironies. All that is fine and dandy.

Indeed, that novel has been written many times.

That novel is not what Philip Jose Farmer has in mind, obviously. He sets up the situation as ably and sympathetically as any mainstream novelist: 66-year-old retired professor in a loveless marriage prepares to spend his “golden years” withering away with his embittered wife under the blistering desert sun; all that is left before him now seems to be a daily alternation between self-absorbed reflection on youthful aspirations unreached and, to punctuate this melancholia, the berating from his wife for her own disappointments.

With Farmer, all of that is preliminary stuff — just enough to give us some sympathetic rapport with the main character and then be dispensed with.

Within the first 10 pages of the first chapter, a door has opened through which Robert Wolff, our unlikely protagonist, slips away into another world. Yes, Robert Wolff has escaped his bitter marriage and his old age into an adventure in wondrous places populated by bizarre creatures and strange companions. He will confront unguessed-at perils and prizes with his youth, freedom, and vitality restored.

Rather than imagine what life is like for a resentful couple in their twilight years, Farmer has imagined us into another world altogether.

Wish fulfillment, critics say dismissively of this sort of tale. 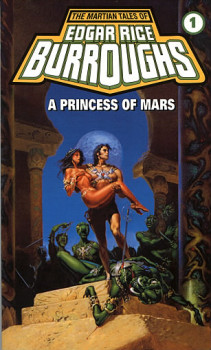 They also say other things about this sort of story, like “juvenile tripe” and “rubbish” and other British-sounding putdowns, but I won’t get into stylistic value judgments here. I want to stay focused on the issue of escapism.

The critic who sets great store by sticking to portrayals of reality as it really is (or at least seems to be) makes the rather utilitarian charge that an imaginary world, such as the one Farmer has here dreamed up, offers — by virtue of its non-existence — nothing of value to the reader except escape (and since this sort of critic apparently does not consider escape to have any value, by inference it offers nothing of value at all).

Do not digress from contemplation of the real; do not regress into fairy tales! Restrain yourself, o author, to examining a sad marriage, the unhappiness of wasted years with a partner who proved more soul sucker than soul mate. That is the world as it is.

Quite right, we nod in agreement. And, you see, that is exactly why we wish to escape.

Farmer did not want to write about this world, not directly anyway — although any sharp student of literature in possession of a broader palette may readily tell you that insight into this world can be obtained by contrast with, or in the refracted light from, invented worlds.

Without doubt there are folks who will sympathize with Robert Wolff, who will relate to the circumstances in which he feels trapped — by “a world he never made” — and they will vicariously escape their own dreary confinements via his adventures.  But is that any worse than the critic’s weekend outing to the golf course or the Xanax he takes before bed?

Here’s the really curious thing about this whole theory of escapism: one would assume it would most appeal to people whose lots in life are closest to that of Robert Wolff. I have known many men in their sixties who read this stuff — but also men (and women) in their forties, their twenties, and in their pre-teens. 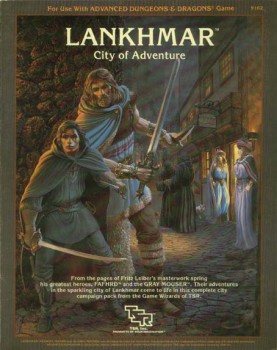 I myself sought out such stories as soon as I could read. When I was barely half a decade on this Earth, I was already trying to escape from it? If mine were a harsh and brutal childhood, that might be easy to reconcile, but by all accounts I was rather spoiled. Indeed, it was when I was most content — with a whole sunny day stretched out before me, and toys and snacks and all the best pleasures a suburban childhood could offer a young boy in the 1970s — that I most desired such stories. It was as if I thought, You know what would make this even better? Slipping out for a jaunt in another world.

I would play such stories out as I traipsed around my back yard. Swinging across the monkey bars, I’d imagine that once my hand grasped the final rung, the entire world around me would transform into a strange foreign landscape. Or perhaps if I squeezed through the bushes alongside the big, boxy A/C unit, I would find a burrow into a land of magic. Or one day I’d open my closet, or look in the mirror, or notice a hitherto overlooked hole in the wall that seemed to be getting larger — and so on.

It was as if my mind was wired always to be keeping one eye cocked for the sudden appearance of an impossible door, the shimmering momentary opening of a way out — of a way in — into Narnia, Oz, Nehwon, Barsoom, Tiers. An odd evolutionary adaptation, if such an elsewhere does not exist.

And if it is just a quirk, an incidental offshoot of our brains’ hardwiring, having in itself no practical survival value, well… I’ll enjoy it anyway. Some evolutionary biologists say the same about our appreciation of music, or fine art — a happy accident.

And if your brain, dear literary critic, is not so wired — if you have no taste for it as some have no taste for classical music or impressionistic painting — that’s okay. But you don’t need to bitch about how it’s all just wish-fulfillment escapism and therefore of no value in better understanding this world. For as long as I can remember, these imagined worlds whose points of ingress are hidden just inside the next alcove or around the next hedge — for me, they have always been a part of this world.