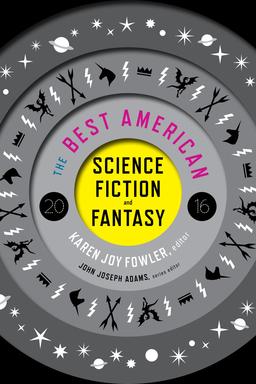 Last year they added an inaugural SF and fantasy volume, The Best American Science Fiction and Fantasy, with John Joseph Adams as series editor. The 2015 edition was edited by Joe Hill and was one of the stronger Best of the Year anthologies from last year; check out the compete TOC here.

It will be available in trade paperback in October, and will include a Foreword by John Joseph Adams, and an Introduction by Karen Joy Fowler. Here’s the complete TOC.

“Meet Me in Iram” by Sofia Samatar (Meet Me in Iram/Those Are the Pearls)
“Interesting Fact”s by Adam Johnson (Harper’s Magazine)
“The Apartment Dweller’s Bestiary” by Kij Johnson (Clarkesworld)
“The Mushroom Queen” by Liz Ziemska (Tin House)
“Tea Time” by Rachel Swirsky (Lightspeed)
“The Duniazát” by Salman Rushdie (The New Yorker)
“The Thirteen Mercies” by Maria Dahvana Headley (The Magazine of Fantasy & Science Fiction)
“Things You Can Buy for a Penny” by Will Kaufman (Lightspeed)
“The Heat of Us: Notes Toward an Oral History” by Sam J. Miller (Uncanny)
“Ambiguity Machines: An Examination” by Vandana Singh (Tor.com)

io9 also presented descriptions, written by John Joseph Adams, for every story in the collection; check out the article here.

See all of our coverage of the best upcoming fantasy here