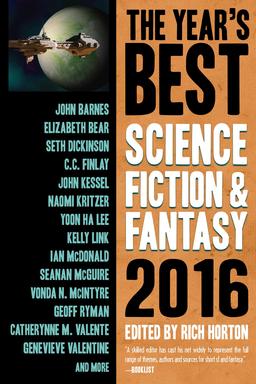 Ten years ago Rich Horton, who’d already published several highly detailed survey articles in the print edition of Black Gate (including “Building the Fantasy Canon: the Classic Anthologies of Genre Fantasy” and “The Big Little SF Magazines of the 1970s”) wrote the first installment of what was to become a highly ambitious series: Rich Horton’s Virtual Best of the Year.

Rich surveyed virtually every piece of short fiction published in the genre in 2005 (an astounding 9.5+ million words), and compiled a list of the best, and we published it here at Black Gate. He repeated that feat in 2006 and 2007, and his reports on the field became more in-depth and insightful each year.

In 2006, Rich also began publishing two anthologies with Prime Books: Fantasy: The Best of the Year and Science Fiction: The Best of the Year. In 2009 those books merged into one massive volume, The Year’s Best Science Fiction & Fantasy, which quickly became one of the most respected and acclaimed anthology series in our industry. It has been published every year since.

The Year’s Best Science Fiction 2016 will be published by Prime Books in June 2016.

See all of our coverage of the best upcoming fantasy books here.