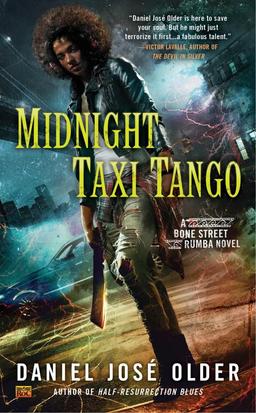 Daniel José Older’s first Bone Street Rumba novel, Half-Resurrection Blues, was one of the most acclaimed novels of the year, selected as one of the Best Fantasy Books of 2015 by BuzzFeed, Barnes & Noble, and other fine establishments.

The second in the series, Midnight Taxi Tango, will be released in paperback next month. If you’re a regular reader at Tor.com, you’ve probably already sampled it, as portions were originally published there as three original short stories: “Anyway: Angie,” “Kia and Gio,” and “Ginga.”

The streets of New York are hungry tonight…

Carlos Delacruz straddles the line between the living and the not-so alive. As an agent for the Council of the Dead, he eliminates New York’s ghostlier problems. This time it’s a string of gruesome paranormal accidents in Brooklyn’s Von King Park that has already taken the lives of several locals — and is bound to take more.

The incidents in the park have put Kia on edge. When she first met Carlos, he was the weird guy who came to Baba Eddie’s botánica, where she worked. But the closer they’ve gotten, the more she’s seeing the world from Carlos’s point of view. In fact, she’s starting to see ghosts. And the situation is far more sinister than that — because whatever is bringing out the dead, it’s only just getting started.

Midnight Taxi Tango will be published by Roc on January 5, 2016. It is 322 pages, priced at $7.99 for both the paperback and digital versions. Sadly, the gorgeous cover art is uncredited.

Read the first chapter at Tor.com.