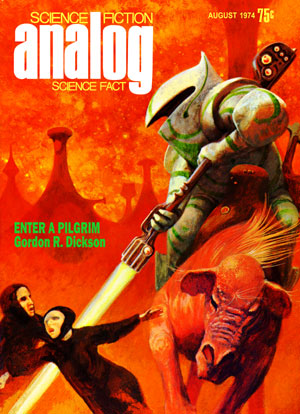 My Black Gate columns are focused on the history of SF — and so far that has turned out to mean mostly discussion of Ã¢â‚¬â„¢50s oriented subjects, with some leakage into nearer years. But now I’d like to take a look at a rather more recent, and rather less celebrated, period. The 1970s. The time of wide ties, leisure suits, and disco. And also the time I discovered SF, and the SF magazines.

My first look at real SF magazines is a moment I remember with a continued thrill. Sometime in late July 1974, in Alton Drugs in Naperville, IL, I wandered by the newsstand and my eyes lit on three magical covers: the August 1974 issues of Analog, Galaxy, and F&SF. That day I bought Analog. The cover story was “Enter a Pilgrim” by Gordon R. Dickson, with a striking, odd, John Schoenherr painting, featuring an alien with a lance and ceramic-appearing armor (a sort of Schoenherr trademark, that ceramic-like surface).

I read that issue quickly and the next day I bought Galaxy, which featured “The Day Before the Revolution,” an Ursula K. Le Guin story that would win a Hugo, as well as parts of two different serials — The Company of Glory by Edgar Pangborn and Orbitsville by Bob Shaw. Of course that issue was also read before the day was out, and the next day I bought F&SF — a very important issue in its own way: it featured John Varley’s first published story (or perhaps his co-first story, as we will see later.) It wasn’t long before I had added Amazing and Fantastic to the roster. Soon I was subscribing to several magazines, and buying the others each month at the newsstand. 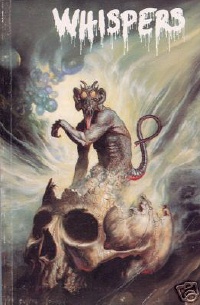 Those five were all the major, well-distributed, magazines there were by 1975. Alas, I just missed seeing If, Galaxy‘s long time companion: it was discontinued at the end of 1974, and for some reason my local newsstand didn’t carry it, at least not those last few months. I had formed an opinion, based on received conventional wisdom, that the “Big Three” of SF magazines had been Astounding/Analog, F&SF, and Galaxy since 1950: certainly that was the case in 1975. (You will get an argument for many years prior to that, however: there are partisans for Startling Stories in the early Ã¢â‚¬â„¢50s, for If at various times, especially during Frederik Pohl’s peak editorial period in the mid-Ã¢â‚¬â„¢60s, and for Amazing and Fantastic under Cele Goldsmith’s editorial hand in the early Ã¢â‚¬â„¢60s.)

Galaxy, however, was in some financial trouble. Under Jim Baen’s editorship it enjoyed a couple of years as a truly wonderfully enjoyable magazine, but when he left the decline was swift. However, Galaxy‘s place in the “Big Three” was quickly taken by Isaac Asimov’s Science Fiction Magazine. And throughout the Ã¢â‚¬â„¢70s, the sister magazines Amazing and Fantastic, edited by Ted White, were the other major prozines.

Most of the rest of the prominent short SF of the Ã¢â‚¬â„¢70s appeared in original anthologies. The Ã¢â‚¬â„¢70s were a boom time for them. For most of the decade there were three major series: Orbit, Universe, and New Dimensions, as well as a few lesser ones, Quark, Infinity, and Chrysalis among them. There were also scads of one-shot theme anthologies, many edited by Roger Elwood. I was soon buying many of these books as well.

So — five major magazines, and lots of anthologies. Was that the whole of short SF in the Ã¢â‚¬â„¢70s? Indeed no! In this article I will cover a series of other magazines, most of which appeared irregularly and lasted only a short time. Some were fairly crudely produced, put together with a typewriter on inexpensive paper. But others were beautiful: many were attempts at slick SF magazines, and a couple were as professional appearing, and as nice looking, as any SF magazines have ever been. 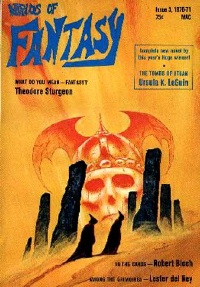 For the purposes of this article I’m restricting my coverage somewhat artificially to a group of magazines that all began publication in the 1970s, were all primarily science-fiction oriented, produced in the United States, and eventually appeared in a fairly professional-looking large (8Ã‚Â½” by 11″) format.

This leaves out a number of magazines of some importance. Chief among these may be Whispers, Stuart David Schiff’s outstanding horror magazine, which began life is a modestly produced digest-sized saddle-stitched Ã¢â‚¬Ëœzine, but which eventually evolved into an elegant large size, and indeed also became an original anthology series. Another critical horror magazine was W. Paul Ganley’s Weirdbook, which began appearing in 1968 and lasted until 1997. Its last issue was actually bound with the last issue of Whispers.

Among SF/Fantasy magazines, a couple of digests were revived in the late Ã¢â‚¬â„¢60s or early Ã¢â‚¬â„¢70s by UPD, publishers of Galaxy. Worlds of Fantasy (1968-1971) was first edited by Lester Del Rey, then Ejler Jakobsson. It is remembered mainly for publishing Connie Willis’s first story, “Santa Titicaca,” as well as one of Michael Bishop’s first (another appeared in Galaxy at about the same time). Worlds of Tomorrow was for some time a companion of Galaxy and If, then suspended, but revived in 1970 for three issues, edited by Frederik Pohl and then Jakobsson. 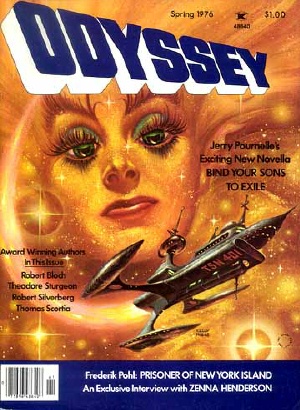 Finally, I’m leaving out one truly important but somewhat anomalous magazine: Omni. It began publication in 1978, and under fiction editors Ben Bova, Robert Sheckley, and Ellen Datlow published a lot of outstanding SF. But it was really primarily a popular science magazine.

This leaves the following magazines, listed in order of first appearance:

I would brand Eternity, Galileo, and Shayol as “semi-professional” magazines. They were fully professional in presentation, but they were published on small budgets, without the backing of a commercial publisher or distributor. The other magazines were all put out by fairly major publishers. In particular Asimov’s SF Adventure Magazine was a companion to Isaac Asimov’s Science Fiction Magazine, which began its life in late 1976 and quickly became one of the top magazines.

However when I label a magazine “semi-professional” I am on shaky ground: the line between professional and semi-professional is surely hard to draw. For instance, of all these magazines Shayol was certainly the nicest looking: really, the most “professional” in appearance. By contrast, Vertex can’t really claim to have had significant distribution, and its last issues appeared in newspaper format.

I’ll cover them in the order above.

The complete version of “The Big Little SF Magazines of the 1970s” appears in Black Gate 10.

2 thoughts on “Feature Excerpt: “The Big Little SF Magazines of the 1970s””