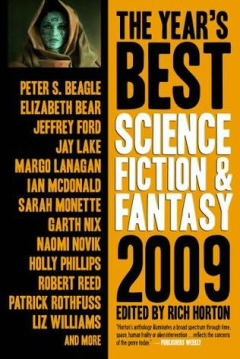 I’m supposed to be putting the finishing touches on BG 14, figuring out how to use Google Ad words, and about a million other things tonight. But man, I am beat.

Besides, the copy of Rich Horton’s The Year’s Best Science Fiction & Fantasy 2009 I ordered finally arrived a few weeks ago, and it’s been sitting there on my desk, unopened. That’s just criminal. So I packed it in early tonight, and curled up with it in the big green chair.

As we’ve established here already, Rich Horton is some kind of crazy person.  It all started with his newsgroup at SFF Net, where he was reviewing every single magazine in the entire universe.  Or as close as damn is to swearing, as they used to tell me while growing up in Nova Scotia.

Then he began compiling lists of his selections of the best short fiction of the year, and we started reprinting them on the BG website (in 2005, 2006 and 2007.)

In between, he knocked out detailed articles exploring the rich history of the SF & Fantasy genres for virtually every issue of Black Gate, starting with Building the Fantasy Canon: the Classic Anthologies of Genre Fantasy: Part One, (BG 2) and continuing with things like an exploration of The Big Little SF Magazines of the 1970s (BG 10), and Fictional Losses: Neglected Stories From the SF Magazines (BG 11).

Now he’s turned his talents to something closer to home: making books.  He’s become an anthologist of note, with over half a dozen Best SF and Best Fantasy volumes to his credit, chiefly from Prime Books.  This year Prime has re-launched the series, with a snappy new cover design and a big bump in size and page count (to 540 pages).  This is a hefty volume, with 37 short stories, detailed author biographies, and Honorable Mentions.

There are a great many Best of the Year books in the genre, but so far this is my favorite.  More later as I make my way through the book.

[…] C.S.E. had a particularly good year last year, in fact: two additional tales made Rich’s Recommended Reading list, including “Household Spirits” (from Strange Horizons; read the complete story here) and her novella The Big Bah-Ha (from Drollerie Press), alongside Robert J. Howe’s novella from BG 14, “The Natural History of Calamity.” We covered the 2009 edition of Year’s Best SF & Fantasy here. […]