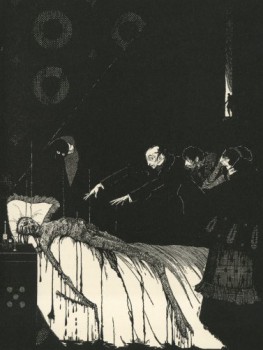 It might surprise regular readers of this website that Edgar Rice Burroughs and Robert E. Howard are not my favorite pulp writers. They rank among the authors who have influenced and inspired me the most—and they provide endless material to discuss and analyze. But my favorite pulper, perhaps my favorite writer of all time, is Cornell Woolrich.

I haven’t written anything about Woolrich on Black Gate before because his genre doesn’t intersect with the dominant focus of the magazine, except maybe in the broad way that Black Gate readers are usually interested in the pulps in general. Woolrich wrote suspense and mystery stories, and the majority of his work appeared in crime magazines like Dime Detective, Detective Fiction Weekly, and the legendary Black Mask. His specialty was the “emotional thriller,” harrowing trips into fear and paranoia with suspense set pieces that no author has equaled. Often called by admirers and critics “the literary Hitchcock” and “the twentieth-century Edgar Allan Poe,” Woolrich could wring more palpitating dread out of everyday life than any writer I’ve encountered. His style is defining of noir, the existential crime tale. Eventually, Hitchcock and Woolrich did merge, when Hitchcock turned Woolrich’s short story “Rear Window” (originally published as “It Had to Be Murder”) into a film that you might have heard of.

But there is one part of Woolrich’s oeuvre that falls into the compass of Black Gate: he made occasional forays into stories of the fantastic. He was actually ideally suited for the horror story, but the market for such tales was not as strong as the crime fiction market (just ask anybody to whom Weird Tales owed money). Woolrich had a personally dismal view of existence—universe and fate are essentially hostile to humanity, and the inevitability of death made life pointless—that could transfer perfectly to the supernatural, where those malign forces of the universe manifest in the unnatural occurrences. The idea that the world doesn’t care for you is one also found in H. P. Lovecraft, although visualized in a different way. If the two men had ever met, there would have been a strange, strange discussion. (Woolrich, however, could rarely be budged from his hotel room in Manhattan. H. P. Lovecraft was a partying socialite in comparison.)

It’s unfortunate that Woolrich didn’t try the speculative fiction more often, since his scattering of horror stories, in particular “Dark Melody of Madness,” “Speak to Me of Death,” its novel version Night Has a Thousand Eyes, and “Jane Brown’s Body,” are among the greatest weird tales ever written. They may not have appeared in Weird Tales, but they certainly could have.

The oddest of these stories is “Jane Brown’s Body,” which was originally published in All-American Fiction, a short-lived general interest pulp, for March-April 1938. “Jane Brown’s Body” visits Frankenstein territory with aspects of zombie horror, but in a brew that only Woolrich could cook: mad science, angst, gangsters, and high adventure all zip across the page. The seventy-page novella is written entirely in present tense, at a time when this wasn’t common. The immediacy of Woolrich’s writing is breathless; a fast-paced writer in general, he’s practically sprinting here.

Three O’Clock in the morning. The highway is empty, under a malignant moon. The oil drippings make the roadway gleam like a blue satin-ribbon. The night is still but for a humming noise coming up somewhere behind a rise of ground. . . .

The novella opens with a sequence typical of Woolrich: a frenzied race against death. Except in this case, death has already occurred. Dr. Anton Denholt drives in a feverish rush to his mountain laboratory with a veiled woman lying in the back seat. A dead woman. Woolrich introduces his theme of the malignant universe on the first page: “The moon is the only thing that keeps up with this careening car, grinning down derisively on it all the way, mile after mile, as though to say, ‘I’m on to you!’ ” In his lab, Dr. Denholt hastily uses his revivifaction experiment to bring her back to life; he succeeds, but the twenty-two year-old woman has no memories, and is essentially an infant. Denholt appropriately names her “Nova.” Where he found her, what his relationship is to her previously, remains unknown.

Two years later, a pilot-for-hire and general adventurer named “Penny” O’Shaugnessy crashes his plane into the mountain near Denholt’s laboratory. O’Shaugnessy finds the scientist and strangely childlike woman, who immediately captivates him. Believing Nova is Denholt’s prisoner and under the control of injections he gives her once a month, O’Shaugnessy escapes from the lab with Nova. With his parting shouts, the mad scientist warns that O’Shaugnessy has doomed the girl: “You’ll know, you’ll know soon enough! You’ll come crawling back to me—with her—begging me to help you! You’ll get down on your bended knees to me, you’ll grovel at my feet—that’ll be my hour!”

The middle stretch of the novella is fleet-footed and fast-trigger action in a gangland setting. Back in Chicago, apparently married to Nova (how he achieved this without her having any I.D., I don’t know, and certainly Woolrich didn’t either), O’Shaugnessy arranges to do some aerial surveillance for mobsters looking to recover the loot their dead boss buried. But when the gangsters see Nova, whose beauty O’Shaugnessy likes to use as a softening tactic with clients, they instantly panic. Apparently, Nova in her forgotten former life was their chief’s girl . . . and his cronies think she knows where his money is stashed. Through furious chase, shoot-out, and suspense, O’Shaugnessy and Nova escape from Chicago and fly to China to accept an offer from a warlord there.

Woolrich could write furious action like almost nobody else, and he achieves the gangland suspense so superbly that he lulls readers into almost forgetting that another doom hangs over the couple, one connected back to mad science. He also makes it easy to overlook that this whole set-up is daft and based on a crazy coincidence. Woolrich loved coincidences—the malignant universe at work—and also knew how to hand-wave readers’ attention away from them with superb writing and relentless tension.

But in Shanghai, another sort of terror comes after O’Shaugnessy and Nova. The girl starts to rot away, decaying in a living death as she reverts back to her corpse state. The descriptions of her growing putrescence are stomach-churning to read, and the desperation that O’Shaugnessy feels as he races back to the U.S. and Denholt’s mountain headquarters in hope of finding a way to stop Nova’s re-death is intense. Complicating matters, the gangsters have found out that O’Shaugnessy and Nova are coming back, and are poised to intercept them.

Woolrich rarely lets readers walk away easily from his stories. Since he never used serial characters, the fates of his protagonists remain uncertain until the end. Sometimes they escape fate, sometimes it swallows them, and sometimes they dangle over an abyss of ambiguity. I won’t tell you the finale of “Jane Brown’s Body” of course, but I will say that in Woolrich’s best work, there is no such thing as “unscathed.”

The story has been re-printed a few times, first in the October 1951 issue of The Magazine of Fantasy and Science Fiction. It was collected in an excellent hardcover, The Fantastic Stories of Cornell Woolrich (Southern Illinois University Press, 1981), but this out-of-print volume is hard to find and usually expensive. The most cost-effective way to get the story is in 13 Short Horror Novels, a 1987 anthology edited by Charles G. Waugh and Martin H. Greenberg, part of the “Baker’s Dozen” collections. The volume also contains “Killdozer” by Theodore Sturgeon, “Nightflyers” by George R. R. Martin, “The Horror from the Hills” by Frank Belknap Long, and “Fearful Rock” by Manly Wade Wellman, so it’s a good investment. (Lovecraft’s “The Shadow out of Time” is also in there, but you already have that in some other anthology, don’t you?)