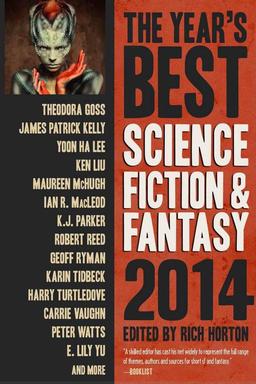 It’s been so busy around here for the past few months that I haven’t had time to read my favorite Year’s Best book — Rich Horton’s The Year’s Best Science Fiction & Fantasy 2014.

This is the sixth volume and it collects a whopping 35 stories, including C. S. E. Cooney’s “Martyr’s Gem” (originally published in Giganotosaurus) and fiction from Alex Dally MacFarlane, Howard Waldrop, James Patrick Kelly, Ken Liu, Robert Reed, Lavie Tidhar, Carrie Vaughn, and many others. Rich has collected stories from a wide range of top-notch publications, including Asimov’s, Clarkesworld, F&SF, Lightspeed, and Beneath Ceaseless Skies, and anthologies like Fearsome Journeys and Old Mars.

“Social Services” by Madeline Ash (An Aura of Familiarity)
“Out in the Dark” by Linda Nagata (Analog)
“The End of the World as We Know It, and We Feel Fine” by Harry Turtledove (Analog)
“The Oracle” by Lavie Tidhar (Analog)
“Call Girl” by Tang Fei (Apex)
“Ilse, Who Saw Clearly” by E. Lily Yu (Apex)
“They Shall Salt the Earth With Seeds of Glass” by Alaya Dawn Johnson (Asimov’s)
“The Wildfires of Antarctica” by Alan De Niro (Asimov’s)
“The Discovered Country” by Ian R. MacLeod (Asimov’s)
“A Stranger from a Foreign Ship” by Tom Purdom (Asimov’s)

See all our recent New Treasures here, and Rich’s recent Retro-Reviews and other articles for Black Gate here.

[…] Rich Horton and also published by Prime. We covered the 2014 edition of Rich’s series back in July. Together, these two volumes give you a comprehensive catalog of the best genre short fiction of […]