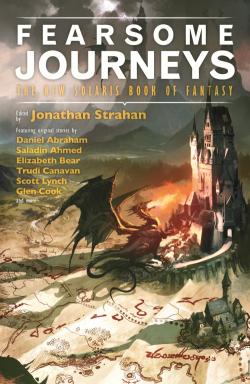 In recent months, I’ve been trying to check out newer writers in the fantasy field. As visitors to this site know, one of the best ways to do this is by investigating the New Treasures posts and Black Gate Online Fiction.

But, another good way I’ve found is by keeping an eye out for newer fantasy anthologies (which are often listed as New Treasures on Black Gate). In my opinion, some of the best include David Hartwell’s Sword and Sorcery, Lou Anders and Jonathan Strahan’s Swords and Dark Magic, and John Joseph Adams’s Epic: Legends of Fantasy.

When Black Gate recently announced Fearsome Journeys: The Solaris Book of Fantasy edited by Jonathan Strahan, I immediately wanted to check it out. Though I’m fairly new to the contemporary SF&F scene, I recognized most of the star lineup of authors that editor Jonathan Strahan had commissioned. Therefore, I was very interested in acquiring and reading Fearsome Journeys.

I ordered posthaste, received it, and the reading mission was accomplished. Now to rave.

Glenn Cook provides another great tale of the Black Company, his popular fantasy military troop, with his story “Shaggy Dog Bridge.” Similar to Cook’s Black Company, Scott Lynch’s “The Effigy Engine” centers upon a group of (wizard) warriors called the Red Hats, who are battled-hardened cynics often attempting to just get by. This was a very interesting tale describing war contraptions that reminded me of medieval versions of the AT-AT Walkers from The Empire Strikes Back. Very cool!

I found Kate Elliot’s “Leaf and Grass and Branch and Vine” one of the most engaging tales. But, interestingly, a spoiler-free summary of it sounds rather boring. It’s basically a story about an older peasant woman who is not a warrior, a wizard, a prophesied one, or anything like that. She seeks to get information about a conspiracy of rebellion to a member of the royal court. That’s it. There are no (direct) descriptions of battles or magic or monsters. Nevertheless, it was a great tale. It reminded me a lot of Robin Hobb’s story “Homecoming” that centers upon the life of a neglected wife; yet, like Elliot’s story, it’s well written, compelling, and fantasy! 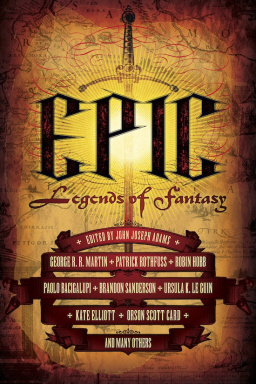 Several of the stories had, to my mind, very surprising elements. Robert V. S. Redick’s “Forever People” almost turned out to be a horror tale. He did a very good job of building suspense at a crucial point.

And I never could see what was coming next with Ellen Kushner and Ysabeau S. Wilce’s “One Last, Great Adventure.” There was not one predictable plot move throughout — a very enjoyable story.

Similarly surprising was Ellen Klages’s “Sponda the Suet Girl and the Secret of the French Pearl.” This story, as far as I could see, was a complete comedy. This was an interesting take on the fantasy genre and I think it was successful. It was quite humorous in relating how a would-be thief is foiled, in various ways, in his attempts to steal a certain treasure.

I found Daniel Abraham’s “The High King Dreaming” to be somewhat haunting. It’s something of a history of a fantasy kingdom given in snapshots from the point of view of a deceased king. Though I kept expecting something to happen (I won’t give it away), it never happened. And astonishingly, I was OK with that. The story ended the way it should have with my unmet expectation hanging.

However, as with any anthology, some of the stories within are better than others or had elements that didn’t seem to work as well as one would hope. In my opinion, a few of the stories seemed to fall flat. I loved Saladin Ahmed’s novel, Throne of the Crescent Moon, but his story, “Amethyst, Shadow, and Light,” though still good, was fairly lackluster. Jeffrey Ford and Robert Redick’s individual stories were also good, but both seemed to end too abruptly, as if they got tired or ran out of time. And K. J. Parker’s story “The Dragonslayer of Merebarton” was like a slacker version of the traditional dragon slayer. I found it to be a bit of a downer.

However, I can say — without any reservation — all of stories contained within Fearsome Journeys are extremely well-crafted. Even with some of these weak points, these are all very good stories. There’s no doubt that these are some of the best writers in the field today. Though I appreciate continuity with the tradition of fantasy, stories such as these are helping me to develop a new appreciation for new takes and re-imaginings about what fantasy can be. I don’t think there’s a tale here that should not be considered fantasy.

The backside of the title page of Fearsome Journeys lists other books edited by Jonathan Strahan. One very exciting thing listed there is “The New Solaris Book of Fantasy Volume Two (forthcoming).”

Oh yes! Bring it forth!

[…] As pimped in the book description, they also publish Jonathan Strahan’s Infinities SF anthologies (Engineering Infinity, Edge of Infinity, and the upcoming Reach for Infinity), and the Fearsome fantasy anthologies (one so far: Fearsome Journeys: The New Solaris Book of Fantasy, which we covered here.) […]

[…] tried to do our part over the last few years. James McGlothlin reviewed the first volume of Fearsome Journeys for us back in August, and I very much hope to cover future […]

[…] Next week sees the arrival of Jonathan Strahan’s Fearsome Magics, his second volume of original fantasy fiction from Solaris. Here’s what James McGlothlin said about the first, Fearsome Journeys: […]