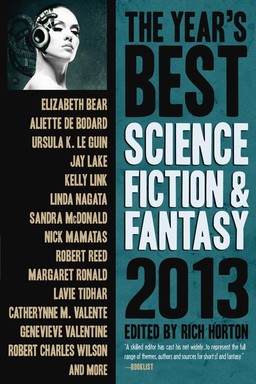 Well, look at that. My favorite Year’s Best anthology has arrived — and earlier than I expected.

This is the fifth volume of Rich Horton’s Year’s Best Science Fiction & Fantasy. Rich did a handful of volumes of Year’s Best Fantasy and Year’s Best SF before combining them into one fat mega-volume starting in 2009. I much prefer these generously-sized tomes. They rest nicely in my lap, and pin me to my reading chair.

This year, Rich selects thirty-three short stories and novelettes from a wide range of magazines — Analog, Asimov’s SF, Interzone,, Beneath Ceaseless Skies, Tor.com, Lightspeed, Weird Tales, Clarkesworld, F&SF, Interzone, Eclipse Online, Electric Velocipede, Tin House, and others — as well as anthologies, including The Future is Japanese, The Mammoth Book of Steampunk, and Robots: The New A.I.

The Year’s Best Science Fiction & Fantasy 2013 Edition was published today, July 10, by Prime Books. it is 520 pages in trade paperback, priced at $19.95. There is no digital edition.

See all our recent New Treasures here, and Rich’s recent Retro-Reviews and other articles for Black Gate here.

[…] It’s definitely that time of the year. Jonathan Strahan’s The Best Science Fiction and Fantasy of the Year, Volume Seven, was released in May (we covered it here), and Rich Horton’s The Year’s Best Science Fiction & Fantasy 2013 Edition arrived on July 10 (here). […]

[…] It’s fairly unusual for a 19,000-word novella to make it into a Year’s Best volume, so this is something to celebrate. Rich Horton’s volumes are our favorite Year’s Best anthologies out there; the 2014 edition is due in May. We covered the 2013 edition here. […]