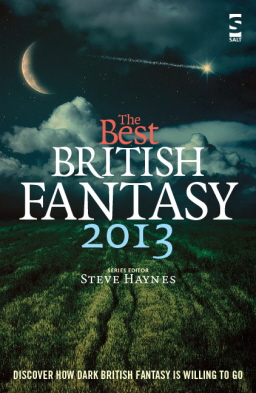 If you’ve been reading this site for more than, say, ten minutes, you’re probably aware that I’m a big fan of anthologies. And I’m especially fond of the Best of the Year anthologies.

And now there’s a new kid on the block. Newcomer Steve Hayes has assembled a promising volume dedicated to the best in British fantasy, including tales from Mark Morris, Lavie Tidhar, Steph Swainston, Lisa Tuttle, and many more. If I had to guess, I’d say the contents run towards the Dark Fantasy side of the spectrum, just based on the subtitle at the bottom: Discover How Dark British Fantasy is Willing to Go.  Here’s the complete description.

It contains a great many stories from names I’m unfamiliar with, which isn’t a bad thing. I’m always on the lookout for new talent, and this seems like a great way to discover it.

It remains to be seen whether the editor has a preference for Dark Fantasy, and we can expect subsequent volumes to be in a similar vein, or if that’s just how the selection turned out this year (and thus next year’s subtitle might be Discover How Much British Fantasy Writers Love Clowns, or something like that).

Steve Haynes was born the same year I was (1964), and has about the same experience editing anthologies (that is to say, none). We also seem to share a love of dark fantasy. He was an English teacher at Secondary level for 25 years and according to his bio “is a prolific and lifelong devourer of science fiction, fantasy, horror, science writing, contemporary philosophy and graphic novels.”

The Best British Fantasy was published by Salt Publishing on July 18, 2013. It is 309 pages, priced at $9.99 for both the trade paperback and the digital editions.

[…] for The Best Horror of the Year and Mammoth Book of Best New Horror anthologies, as well as The Best British Fantasy 2013, but A Cold Season is her freshman novel and it has already received a very favorable welcome […]