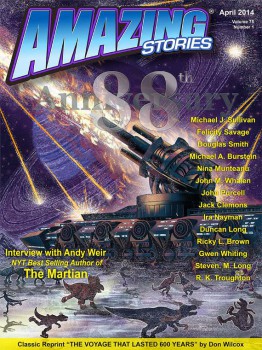 Amazing Stories is one of those legendary magazines of the first fandom age. Launched in 1926 by Hugo Gernsback (ie: the guy the Hugo Awards are named after), it was the first magazine devoted to science fiction stories.

This forerunner status didn’t assure it success and the magazine suffered bankruptcy, changes in ownership, editorial style, legal troubles, and so it has had many incarnations.

In recent years, Steve Davidson and a small army have been making efforts to resurrect Amazing Stories as an e-magazine, at first as a magazine focusing on fandom, and now, more consciously approaching the role of a magazine that will be offering new fiction and a new editorial voice. But, as Davidson notes, baby steps is the key.

The 88th Anniversary issue features articles of science fact, articles about fandom, reprinted short fiction, and some new stories as well. It is a visually-powerful magazine, with some great interior and cover art, so it was beautiful to toggle through on my Kindle.

On the content side, I have strong feelings about the sf field and this magazine pulled those feelings in a couple of directions.

I’ll admit I floundered a bit trying to discern the editorial taste, until I looked at the first fandom context of Amazing Stories and the aura of nostalgia around the age and history of science fiction as a genre. 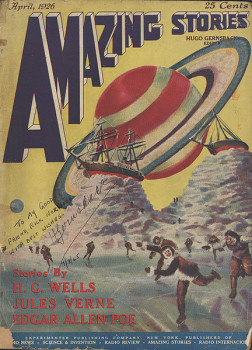 Of the fiction, I loved “Spirit Dance” by Doug Smith and “Tool Dresser’s Law” by Jack Clemons.

Smith, a Campbell-nominated and Aurora-winning writer, had a story of were-creatures in the Canadian wild, based in part on native legends, but with a uniquely modern political slant. Clemons’s story was very classic sf in style, about a prospecting and mining crew checking out a mysterious object on its quick way through the solar system.

“Virtually Yours” by Nina Munteanu was a creepy, dark romance channeling some Cyrano de Bergerac. On the other hand, Ira Nayman’s “Weird Stories, Strangely Told” is light absurdism, speculative fiction reviving the spirit of Airplane or Police Squad.

The only story I felt was over-the-top was “Cosmic Corkscrew” by Michael Burstein, although I get that I’m probably in the minority here (the story originally appeared in Analog and was nominated for a Hugo, I think).

The other reprints supported the nostalgic feel of the magazine and built support for the launch of an Amazing Stories featuring new fiction.

The broader question for me, for the health of whatever Amazing Stories is to become, is ultimately where its soul is at. Will this be a magazine aiming at the nostalgia audience or will this be a forward-looking magazine, with its own edge and editorial vision? 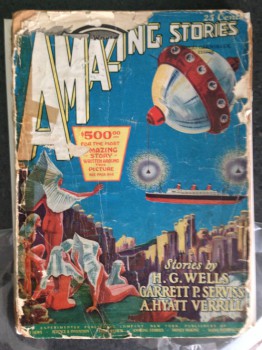 Either way, it will have to be capable of competing toe-to-toe with the literary quality and originality of Lightspeed, Clarkesworld, Asimov’s, F&SF, Analog, to say nothing of the anthologies and the very strong semi-pro magazines like On Spec?

This special issue did not answer that question for me, but it strikes me that the original Amazing Stories was home to adventure science fiction. If this new incarnation is aiming in that direction, a really good model for Amazing may be Beneath Ceaseless Skies.

BCS loudly and unapologetically publishes adventure fantasy, the most original and edgy it can find. And Amazing may need to somehow cultivate a crop of writers capable of delivering that kind of near-future hard sf, because other magazines already have trouble finding it.

So what do I leave you with on this 88th Anniversary issue? Pick up an issue of Amazing Stories and read it here.

Derek Kunsken is a writer of science fiction, fantasy and sometimes by accident, horror, living in Gatineau, Quebec. You can find out more about him at www.derekkunsken.com or @derekkunsken

thank you so much for a kind and thoughtful review.

You asked the following: “Will this be a magazine aiming at the nostalgia audience or will this be a forward-looking magazine, with its own edge and editorial vision?”

My answer is another question. Why can’t it be both?

Fandom is a continuum of generations, each carrying forward information, experiences and traditions from the past, all to be modified, adapted and added to by the present. Science Fiction, Fantasy and Horror, as literary genres, are continuums, each building upon the examples and body of works that have gone before.

I see every reason for Amazing to exemplify that continuum – paying homage to the past and boldly exploring the future.

I see no good reason for the new Amazing Stories not to honor its traditions, forbears, founders and fans, while at the same time using that very solid base as a launching pad for whatever direction the field goes in.

Frank Wu’s cover goes a long way towards encapsulating that vision. Not just an update or homage to the past – a recognition of the past and incorporation in the future.

If you are looking for historical precedent, I suppose that the closest prior incarnation of the magazine (for me) was the Ted White era, once the magazine emerged from its reprint doldrums: I could always count on two things every single issue: reading a couple of stories I really enjoyed and discovering something new. And very rarely finding a stinker of any kind. Tied into fandom (via letter col, The Club House feature, some non-fiction articles), unashamed and reverent for its past, always on the lookout for new voices and new talent. A magazine a fan could read cover to cover.

That covers a lot of ground but as you mentioned, we’ve got a small army over here and it grows on a daily basis.

I’m excited about the magazine and its future. I’ve only got one quibble: a few of the 14 stories in the 88th anniversary issue were original publications, not reprints.

Thanks so much for your comment and for putting something new out into the wide world. I hear you on the soul of the magazine and I think that’s largely what I felt while reading the magazine. This is just my opinion, and is likely wrong, but I do see homage to the past as a particular weight that limits where the future can go. That being said, I’m probably wrong, have no evidence for this worry, and would be delighted to be proven wrong 🙂

And I whole-heartedly accept your quibble – I had been checking on the publication histories of the stories, but obviously missed the fact that some were new. Quibble corrected 🙂