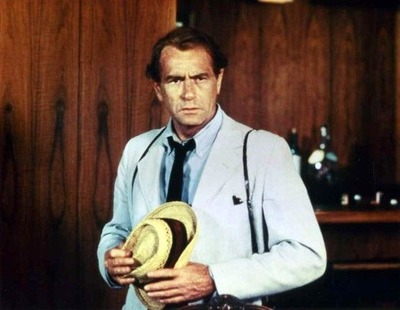 Over at Tor.com, occasional Black Gate blogger Alex Bledsoe has written a Love Letter to Carl Kolchak. As brilliantly portrayed by Darren McGavin in a single season of Kolchak: The Night Stalker (1974-75), Carl Kolchak was one of the greatest supernatural sleuths of all time — and a personal hero of mine when I was 10 years old. (And for much of my 30s and 40s, now that think about it.)

So get your eyes off him, Alex. He’s all mine.

I already had vague notions of writing my own stories, but as a lonely geek in small-town Tennessee, being a writer seemed about as likely as getting a date.

But when I saw Kolchak, everything changed. So what if girls ignored me? I could ignore them just like Carl did. What did it matter if there was nothing in my small town to make me look forward to the future? The Truth, long before the X-Files, was out there somewhere, in a big city like Chicago where monsters could lurk with impunity. All I needed were a few pieces of gear, like a portable cassette recorder (these were cutting edge at the time), a 110 camera … and that most glorious of inventions, the typewriter, featured in the show’s credits.

Alex Bledsoe is the author of five Eddie LaCrosse novels (including The Sword-Edged Blonde, and the latest, He Drank, and Saw the Spider), Blood Groove, The Girls with Games of Blood, and the Tufa novels, The Hum and the Shiver and Wisp of a Thing. His last article for us was Pacific Rim and the Culture of Rip-Off Vs. Homage.

I’ve long known about Kolchak‘s influence upon what I consider to be the greatest television show of all time, i.e. The X-Files of course!

But I’ve only recently been watching episodes of it on Netflix this summer, and I still haven’t finished all of them. I find some of them to be excellent, and some not so great.

This might be one of those phenomena where you had to grow up with it to really love it. From my perspective, I’ll take The X-Files over Kolchak any day.

You’re almost certainly right. I bought the complete series on DVD a few years ago, and was deathly afraid I would find the show unwatchable in my late 40s. But That was not the case – I loved it all over again. Nostalgia is a powerful thing.

For you, I highly recommend watching the first two TV movies – The Night Stalker and The Night Strangler. I watched them for the first time two years ago, and found them excellent. They are fine horror films, even today, wonderfully written.

The wall of my childhood bedroom is still adorned with an autographed photo of McGavin as Kolchak that my aunt got for me when I was a kid. Moreso than even Captain Kirk, Kolchak was my hero.

To completely agree with John, James, the two movies really are great. The first one has a strong dose of seventies paranoia going on and a great supporting cast. The show is technically eh but McGavin (and Simon Oakland) are terrific, making the show a ball.