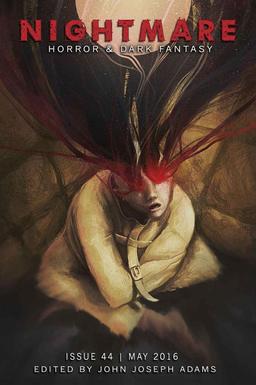 The contents of the May issue of online magazine Nightmare are now fully available at the magazine’s wesbite. This issue contains original short stories from Adam-Troy Castro and Lisa Goldstein, and reprints from Joe Hill and Sarah Langan.

“The Old Horror Writer” by Adam-Troy Castro
He’s harder to find than most. I have the basis for comparison because I’ve gotten to all of them sooner or later, from the big names to the obscurities. There are some who give up so thoroughly, and disappear so completely, that it’s as if they never existed at all. This guy’s far from the worst. He’s an old man now, twenty years removed from his last novel and ten from his last short story; he’s no longer a member of HWA or SFWA, and the agency that used to handle his interests now has him in their estate file.

“Sawing” by Lisa Goldstein
Clarissa watched from the wings as the Great Bertoldi sawed a woman in half. Down went the saw through the coffin-like box, then up, then down again. A cigarette burned at the side of his mouth, on the edge of his smile. The saw broke through the box. He put it down and slid metal plates between the two halves, then rolled the sections apart. The woman’s head poked out from the end of one of the sections, feet from the other.

“Twittering from the Circus of the Dead” by Joe Hill (from The New Dead, 2010)
What is Twitter? “Twitter is a service for friends, family, and co-workers to communicate and stay connected through the exchange of quick, frequent answers to one simple question: What are you doing?.. Answers must be under 140 characters in length and can be sent via mobile texting, instant message, or the Web.”

“The Lost” by Sarah Langan (from The Lost, 2008)
A week ago, I was a salesgirl at Filene’s Basement. It was seven a.m. on the morning of our semi-annual suit sale, and I was driving my twelve-year-old Saturn down Stewart Avenue. I was late for work because I’d stayed up drinking Wild Turkey in front of Abbot and Costello Meet Frankenstein. It was a depressing good time for lonely hearts at the casa de Koszalin, punctuated by a screaming alarm at 6:30 a.m. and cheese doodles dried to the side of my face.

The non-fiction this issue includes the latest installment in their long-running horror column, “The H Word,” plus author spotlights, a showcase on cover artist Daniel Sherekin, an editorial, and a feature interview with Angela Slatter.

Nightmare is edited by John Joseph Adams. This is the 44th issue. Subscriptions are available for just $1.99 per issue, single issues are available in multiple digital formats for $2.99. Purchase copies and sample free content at the website.

The cover this month is by Daniel Sherekin.

We last covered Nightmare with the March 2016 issue.